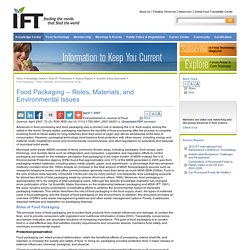 April 2007. 72 (3), R39–R55. doi:10.1111/j.1750-3841.2007.00301.x. Development of Active and Nanotechnology-based Smart Edible Packaging Systems: Physical–chemical Characterization. How The WikiCell Edible Packaging Is Made. David Edwards's WikiCell Makes Edible Food Packaging. A third of the waste that’s dumped into landfills is packaging such as boxes, bags, and food wrappers. 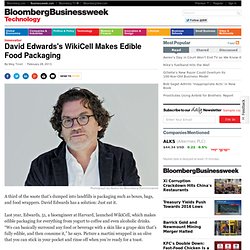 David Edwards has a solution: Just eat it. Last year, Edwards, 51, a bioengineer at Harvard, launched WikiCell, which makes edible packaging for everything from yogurt to coffee and even alcoholic drinks. The edible wrapping that tastes as good as what's inside. We've all done it -- gorged on a whole tub of ice cream. 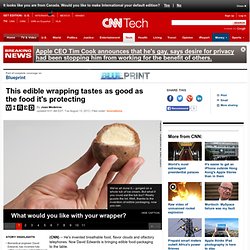 But what if you could eat the tub too? Really guzzle the lot. Well, thanks to the invention of edible packaging, now you can. The creation of Harvard biomedical engineer David Edwards, Wikipearl is an edible packaging that is supposed to enhance the food your eating. Early options include mango ice cream with a coconut wrapper, oatmeal bites and natural yoghurt with strawberry wrapping. Wikipearl draws inspiration from the magic of grape skins and by doing so eliminates plastic from foods and beverages. Wikicells have also been used to wrap balls of cheese.

Slightly less appealing perhaps but cool all the same -- once you've finished slurping on your cocktail, why not gobble up your glass? Edwards and his team recently launched the world's first café for food in edible packaging. Hate trying to squeeze out the last scrap of toothpaste? Who knew the tooth-brushing business could be so progressive?

What's on the menu? How does it work? Edible Packaging. The future of sustainable packaging is beautiful … and edible. By Tuan C. 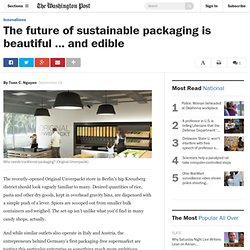 Nguyen September 19 Who needs traditional packaging? (Original Unverpackt) The recently-opened Original Unverpackt store in Berlin’s hip Kreuzberg district should look vaguely familiar to many. Desired quantities of rice, pasta and other dry goods, kept in overhead gravity bins, are dispensed with a simple push of a lever. And while similar outlets also operate in Italy and Austria, the entrepreneurs behind Germany’s first packaging-free supermarket are touting this particular enterprise as something much more ambitious. Toothpaste, for instance, can be purchased as single-use chewable tablets. Yet it’s what the store doesn’t sell that shows the extent in which plastic has become an integral part of our lives. Drink up, then eat the glass – the trend for edible food packaging and tableware. 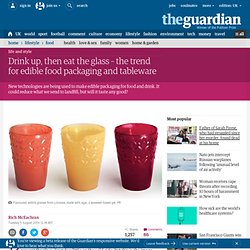 You're at a party, drinking a cocktail. Once you've sipped, you eat the glass. Edible Packaging? Retailers Not Quite Ready To Ditch The Wrapper. A strawberry vanilla WikiPearl made with Stonyfield frozen yogurt. 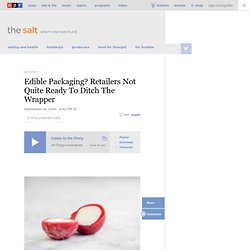 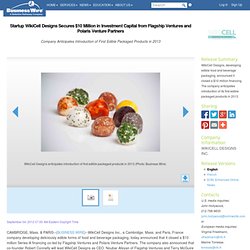 Noubar Afeyan of Flagship Ventures and Terry McGuire of Polaris Venture Partners will join the WikiCell Designs board. “This technology is applicable to a vast amount of food and beverages and we intend to market products direct to consumer and in retail settings, with our own branded products and with partner brands.” “WikiCell Designs was created to turn food and beverage packaging from plastic toward all-natural forms, protecting products much as nature does, and eliminating the need for protective materials that are potentially harmful to human health and the environment. Packaging You Can Eat. Packaging You Can Eat by The World. The Futuristic Food Packaging You Can Eat, Even After Washing It. Remember David Edwards, the Harvard professor behind smokable chocolate and inhalable coffee? 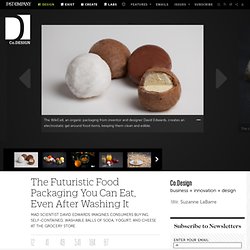 When we last wrote about Edwards, in March, he was introducing Wahh, a Philippe Starck-designed canister that delivers puffs of vaporized alcohol. Since then, Edwards’s team has been back in the kitchen, working with designer François Azambourg to develop the WikiCell, a product that has implications for the food industry that move well beyond novelty. A great PRI report from earlier this week introduces us to the WikiCell, an edible packaging that attempts to reduce the massive amount of packaging used to sell food.

"Think about the skin of a grape and how it protects the grape itself," explains Edwards on WikiCell’s website. WikiCell - Edible Food Packaging. Tomatoes Transformed Into Edible Food Containers. Nature knows that one of the best ways to package food is to make it possible to eat the whole dang thing, skin and all. 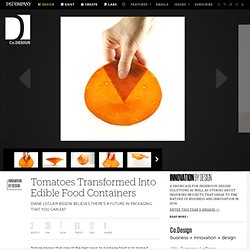 In that spirit, Diane Leclair Bisson is working to give fruit a brand-new identity, transforming tomatoes into a series of edible containers for a project designed to encourage reflection on our consumption-centric society and wasteful habits. It’s casing that becomes part of the snack--rather than toss it in the trash, just pop it in your mouth. The endeavor is an evolution on Bisson’s research under her Taste No Waste initiative, established to explore the idea of doing away with disposable food products, particularly in the context of high-end gastronomy, catering, schools, and even fast food.

As it turns out, the public has a hearty appetite for the experiment. But can the thought-provoking concept be translated to something ecologically and logistically viable for the larger marketplace? The Future of Food Packaging. This Edible Blob Is A Water Bottle Without The Plastic. One way to stop the ever-growing pile of plastic water bottles in landfills? 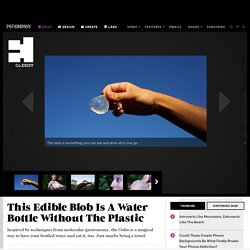 Make a bottle people can eat. Inspired by techniques from molecular gastronomy, three London-based industrial design students created Ooho, a blob-like water container that they say is easy and cheap to make, strong, hygienic, biodegradable, and edible. The container holds water in a double membrane using "spherification," the technique of shaping liquids into spheres first pioneered in labs in 1946 and more recently popularized by chefs at elBulli in Spain. It works a little like an egg yolk, which also holds its shape using a thin membrane. "We’re applying an evolved version of spherification to one of the most basic and essential elements of life—water," says Rodrigo García González, who designed the Ooho with fellow design students Pierre Paslier and Guillaume Couche.