Cockroach Milk Could Make A Nutritious Meal In The Future. While the idea of a cockroach milkshake might not exactly get your gastric juices flowing, it’s a highly nutritious source of protein and it could be a valuable tool to ease our world’s food production woes. 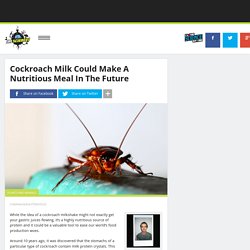 Around 10 years ago, it was discovered that the stomachs of a particular type of cockroach contain milk protein crystals. This cockroach (Diploptera punctata) is the only known viviparous cockroach, meaning it gives birth to live young, which is fairly bizarre for an insect. Grilovaní červi a smažení cvrčci. V Děčíně byla ochutnávka budoucnosti. How then shall we eat? Insect-eating attitudes and sustainable foodways. Negative attitudes toward invertebrates are a deep-seated, visceral response among Western peoples. 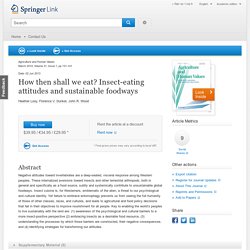 These internalized aversions toward insects and other terrestrial arthropods, both in general and specifically as a food source, subtly and systemically contribute to unsustainable global foodways. Insect cuisine is, for Westerners, emblematic of the alien, a threat to our psychological and cultural identity. Yet failure to embrace entomophagy prevents us from seeing the full humanity of those of other classes, races, and cultures, and leads to agricultural and food policy decisions that fail in their objectives to improve nourishment for all people. Edible Bugs Gift Pack. European Legislation must change to enable insects to contribute to sustainability. Profiling consumers who are ready to adopt insects as a meat substitute in a Western society. Eating insects won't take off in the west. Insects are unlikely to become a viable solution to feeding the increasing global population if western attitudes towards them remain negative, according to a leading analyst. 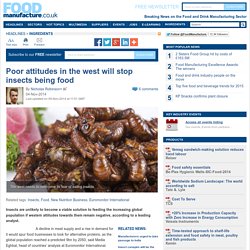 A decline in meat supply and a rise in demand for it would spur food businesses to look for alternative proteins, as the global population reached a predicted 9bn by 2050, said Media Eghbal, head of countries’ analysis at Euromonitor International. “The answer [to feeding the world] could be insects, which are already being eaten in many parts of the world by an estimated 2bn people, according to the Food and Agriculture Organisation of the United Nations,” she said.

Viable food source However, the most obvious challenge to insects becoming a viable food source for the future was the negative attitudes towards eating insects in western cultures, which had to change, she added. BRIC economies European consumer meat expenditure. Europeans may be 'ready to buy and cook' insects, finds Belgian study. There is a good chance that consumption of insects can be introduced to the food habits of Western European populations, according to new research that found Belgian consumers were 'ready to buy and cook' insects. 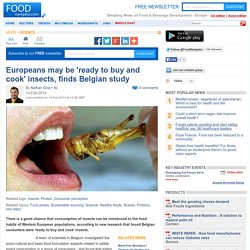 A team of scientists in Belgium investigated the socio-cultural and basic food formulation aspects related to edible insect consumption in a group of consumers - and found that eating insects was 'mainly well accepted' by participants in the study whatever their age or sex. Led by Rudy Caparros Megido from the University of Liège, the team developed a series of hedonic tests associated with a survey about the perception of consuming insects (entomophagy) and purchase intentions, to determine whether there really was potential for insects to replace or complement traditional protein sources. 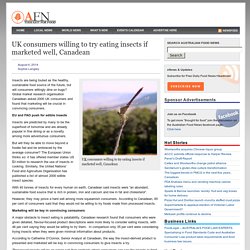 Global market research organisation Canadean asked 2000 UK consumers and found that marketing will be crucial in convincing consumers. An Exploration on Greenhouse Gas and Ammonia Production by Insect Species Suitable for Animal or Human Consumption. Background Greenhouse gas (GHG) production, as a cause of climate change, is considered as one of the biggest problems society is currently facing. 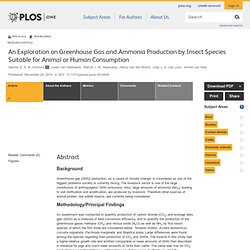 Meat producers should replace cattle with insects, scientists say. Scientists in the Netherlands have discovered that insects produce significantly less greenhouse gas per kilogram of meat than cattle or pigs. 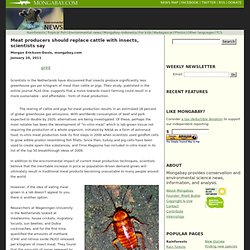 Their study, published in the online journal PLoS One, suggests that a move towards insect farming could result in a more sustainable - and affordable - form of meat production. The rearing of cattle and pigs for meat production results in an estimated 18 percent of global greenhouse gas emissions. With worldwide consumption of beef and pork expected to double by 2020, alternatives are being investigated. 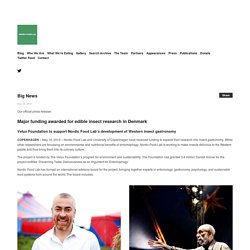 While other researchers are focussing on environmental and nutritional benefits of entomophagy, Nordic Food Lab is working to make insects delicious to the Western palate and thus bring them into its culinary culture. The project is funded by The Velux Foundation’s program for environment and sustainability. The Foundation has granted 3.6 million Danish Kroner for the project entitled ‘Discerning Taste: Deliciousness as an Argument for Entomophagy’. Nordic Food Lab has formed an international advisory board for the project, bringing together experts in entomology, gastronomy, psychology, and sustainable food systems from around the world.

Energy-efficient food production to reduce global warming and ecodegradation: The use of edible insects. Centre for Pollution Control & Environmental Engineering, Pondicherry University, Chinakalapet, Puducherry 605 014, India Received 14 April 2011, Accepted 21 July 2011, Available online 14 October 2011 Choose an option to locate/access this article: Check if you have access through your login credentials or your institution Check access doi:10.1016/j.rser.2011.07.115 Get rights and content Abstract. 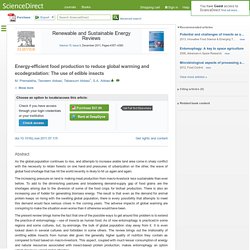 Insects for food and feed. Edible insects. The designations employed and the presentation of material in this information product do not imply the expression of any opinion whatsoever on the part of the Food and Agriculture Organization of the United Nations (FAO) concerning the legal or development status of any country, territory, city or area or of its authorities, or concerning the delimitation of its frontiers or boundaries. 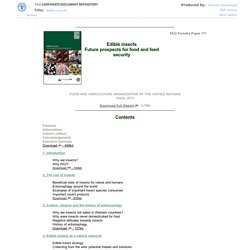 The mention of specific companies or products of manufacturers, whether or not these have been patented, does not imply that these have been endorsed or recommended by FAO in preference to others of a similar nature that are not mentioned. The views expressed in this information product are those of the author(s) and do not necessarily reflect the views or policies of FAO. ISBN 978-92-5-107595-1 (print) E-ISBN 978-92-5-107596-8 (PDF) UN says eating insects could fight hunger. A new United Nations report say the health benefits of consuming nutritious insects could help fight obesity and world hunger. More than 1,900 species of insects are eaten around the world, mainly in Africa and Asia, but people in the West generally turn their noses up at the likes of grasshoppers, termites and other crunchy fare. The authors of the study, which was published on Monday, by the Forestry Department, part of the UN Food and Agriculture Organisation (FAO), said many insects contained the same amount of protein and minerals as meat and more healthy fats doctors recommend in balanced diets.

Al Jazeera's Jessica Baldwin, reporting from London, said that there is no shortage in supply as there are 1,900 edible insect species on the planet, 40 tonnes of insects to every human. "But it’s not for everyone. How insects could feed the world. At first, my meal seems familiar, like countless other dishes I’ve eaten at Asian restaurants. A swirl of noodles slicked with oil and studded with shredded chicken, the aroma of ginger and garlic, a few wilting chives placed on the plate as a final flourish. And then, I notice the eyes. Dark, compound orbs on a yellow speckled head, joined to a winged, segmented body. I hadn’t spotted them right away, but suddenly I see them everywhere – my noodles are teeming with insects. I can’t say I wasn’t warned. “I believe you’re the first human being on the planet to have ever been served anything cooked with this,” Reade tells me.

Grub's up: can insects feed the world? From the high windows of a warehouse in southern Spain a shaft of light falls on the white-gloved hand of insect farmer Laetitia Giroud. She is holding a large cricket, which sits perfectly still above the plastic box that is home to hundreds of its relatives. They're chirping to each other, giving the industrial unit a gently bucolic air. Nearby are another 30 or so boxes, filled with mealworms, black soldier flies and grasshoppers. "They have a great life," says Giroud, smiling at the elegantly poised insect. Could insects be the wonder food of the future? Billions more hungry mouths are going to put more strain on the planet’s resources. Can eating creepy crawlies offer a solution? Emily Anthes reports. At first my meal seems familiar, like countless other dishes I’ve eaten at Asian restaurants.

Insects on a Global Food Agenda. In 2013, the U.N. Food and Agriculture Organization (FAO) issued a report proposing edible insects as a viable alternative for food and feed security both in developed and developing countries. Edible Insects. Food-Info.net> Products > Edible insects Insects have played an important part in the history of human nutrition in Africa, Australia, Asia and the Americas . Hundreds of species have been used as human food. Entomophagy Wiki. Insects as Food, by Gene DeFoliart; Home Page. Eating Bugs!! Manataka™ American Indian Council. Roasted crickets and toasted ants – coming to you courtesy of EU research millions.

According to one study, small grasshoppers offer 20 per cent protein and just six per cent fat, to lean ground beef's 24 per cent protein and 18 per cent fat. Insects approved for human consumption. It’s official: We are free to put insect paste on our bread or cook worm hamburgers for supper. Hmyz jako jídlo? Evropané si musí začít zvykat. "S 20 miliardami krav, což je dvojnásobek počtu z 80. let minulého století, svět dosáhl svého maximálního počtu těchto přežvýkavců. Poor attitudes in the west will stop insects being food. Eating insects won't take off in the west. Home. Raise Your Own Edible Bugs With This Decorative Kitchen Pod. The U.N. recently suggested (not for the first time) that we put a bit more crunchy insect protein into our diets.

Six Foods. Edible Insects : Best Shop to buy them in Europe. The Original Cricket Energy Bar. Ento : Ento. Next Millennium Farms. Leading the Protein Revolution. The Future of Food: Eating Insects. Farm 432: Insect Breeding kitchen appliance by Katharina Unger. Graduate designer Katharina Unger has designed a table-top insect breeding farm that allows people to produce edible fly larvae in their homes (+ slideshow). "Farm 432 enables people to turn against the dysfunctional system of current meat production by growing their own protein source," said Unger. As part of the project, she bred and ate black soldier fly larvae in a prototype system, then designed a machine to replicate the process on a domestic scale.