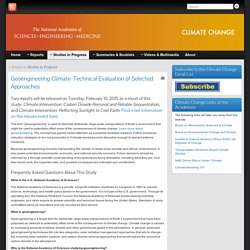 Find more information on the release event here. The term “geoengineering” is used to describe deliberate, large-scale manipulations of Earth’s environment that might be used to potentially offset some of the consequences of climate change. Learn more about geoengineering. The concept has gained recent attention as a possible backstop measure if other emissions reduction strategies to are not successful or if climate trends become disruptive enough to warrant extreme measures. Because geoengineering involves manipulating the climate, it raises some societal and ethical controversies. Frequently Asked Questions About This Study What is the U.S. David Keith: A critical look at geoengineering against climate change. Sucking carbon from the sky may do little to slow climate change. As U.S. 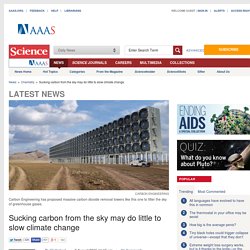 President Barack Obama finalizes plans to cut greenhouse gas emissions today, climate researchers are wondering whether even more extreme measures will be needed—such as using machines to suck carbon dioxide from the environment. Now, a new study of these so-called carbon dioxide removal (CDR) technologies finds that the strategy would have only a minimal impact. "You hear CDR mentioned as an option to maybe avoid dangerous climate change, but when we did the simulations you see the effect of this technique is quite small," says lead author Sabine Mathesius, a climate modeler at the Potsdam Institute for Climate Impact Research in Germany.

CO2 removal cannot save the oceans—if we pursue business as usual. Greenhouse-gas emissions from human activities do not only cause rapid warming of the seas, but also ocean acidification at an unprecedented rate. 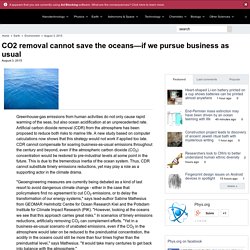 Artificial carbon dioxide removal (CDR) from the atmosphere has been proposed to reduce both risks to marine life. A new study based on computer calculations now shows that this strategy would not work if applied too late. CDR cannot compensate for soaring business-as-usual emissions throughout the century and beyond, even if the atmospheric carbon dioxide (CO2) concentration would be restored to pre-industrial levels at some point in the future. This is due to the tremendous inertia of the ocean system. Geoengineering is ‘no substitute’ for cutting emissions. 04 Aug 2015, 16:30Robert McSweeney A carbon capture coal plant | Flickr Attempts to limit climate change by removing carbon dioxide directly from the atmosphere would not prevent the irreversible damage to the oceans, according to a new study. 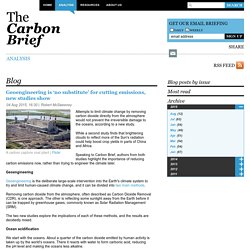 While a second study finds that brightening clouds to reflect more of the Sun's radiation could help boost crop yields in parts of China and Africa. Speaking to Carbon Brief, authors from both studies highlight the importance of reducing carbon emissions now, rather than trying to engineer the climate later. Scientists Are Coming Up With 'Last Ditch' Remedies for Climate Change. As talks aimed at slowing global warming drag on, researchers are pushing new ideas that some are calling last-ditch attempts to avert the worst effects of climate change. 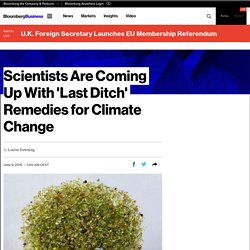 Some proposals are uncontroversial, such as using charcoal to lock carbon dioxide into soil or scattering carbon-absorbing gemstones. Richard Branson, the billionaire chairman of Virgin Group Ltd., has offered a $25 million prize for the best solution in the field known as geoengineering. Other ideas to cool the planet have scientists worried about unintended consequences. There are proposals, untested at scale and with uncertain costs, to block the sun’s rays with airborne particles or seed the oceans with carbon-absorbing iron. That they’re even being considered reveals both frustration over government inaction and skepticism that policy alone will solve the problem. Záměrné poškozování životního prostředí jako zbraně. Virgin Earth Challenge : The Prize. Sir Richard Branson's Virgin Earth Challenge is an innovation incentive designed to award scalable and sustainable ways of removing greenhouse gases from the atmosphere. 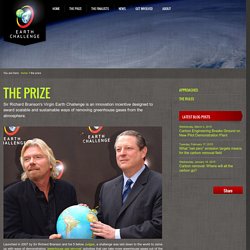 Launched in 2007 by Sir Richard Branson and his 5 fellow Judges, a challenge was laid down to the world to come up with ways of demonstrating ‘greenhouse gas removal’ activities that can take more greenhouse gases out of the air than they emit. Often referred to as Carbon Dioxide Removal, Carbon Sequestration, Carbon Drawdown, or ‘Negative Emissions’, these proposed approaches look to work in conjunction with reducing greenhouse gas emissions in the first place – to help meet emissions reductions targets for a more stable climate and healthier oceans. To show how seriously this notion is being considered, one of the biggest science and innovation prizes in history, the $25m Virgin Earth Prize, is offered as a reward. That’s why we’re very excited about our finalists. File. 1-s2.0-S1876610213007807-main. Acp-9-5539-2009.pdf. 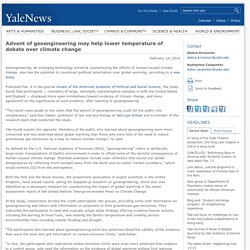 Published Feb. 9 in the journal Annals of the American Academy of Political and Social Science, the study found that participants — members of large, nationally representative samples in both the United States and England — displayed more open-mindedness toward evidence of climate change, and more agreement on the significance of such evidence, after learning of geoengineering. “The result casts doubt on the claim that the advent of geoengineering could lull the public into complacency,” said Dan Kahan, professor of law and psychology at Yale Law School and a member of the research team that conducted the study. As defined by the U.S. These Tiny Bubbles May Save the Planet - Bloomberg Business. There are two ways to cut down on our greenhouse-gas emissions: Reduce the amount we make or limit how much of what we make actually gets into the atmosphere. 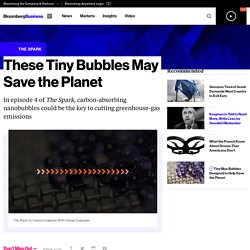 It’s the second solution that researchers at the Lawrence Livermore National Laboratory want to tackle with cute caviar-sized bubbles that can absorb carbon dioxide. The polymer bubbles are filled with the entirely pedestrian ingredient of baking soda, long known to absorb carbon dioxide, but it’s the bubbles themselves that are the breakthrough. 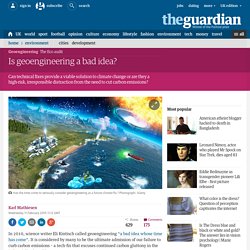 Geoengineering Is Good Insurance. What makes climate change dangerous isn't just what we know, which is that human activity is warming the planet. 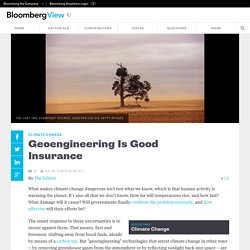 It's also all that we don't know. How far will temperatures rise, and how fast? What damage will it cause? Will governments finally confront the problem seriously, and how effective will their efforts be? Will geoengineering end the debate over climate change? Southern Ocean iron fertilization by baleen whales and Antarctic krill - Nicol - 2010 - Fish and Fisheries. ETC_geopiracy_4web.pdf. Climate & Geoengineering. Aciddeposition7.pdf.

Geoengineering by cloud seeding: influence on sea ice and climate system. Environ. Res. Lett. 4 (October-December 2009) 045112doi:10.1088/1748-9326/4/4/045112. A review of climate geoengineering proposals. Climate geoengineering proposals seek to rectify the current radiative imbalance via either (1) reducing incoming solar radiation (solar radiation management) or (2) removing CO2 from the atmosphere and transferring it to long-lived reservoirs (carbon dioxide removal). For each option, we discuss its effectiveness and potential side effects, also considering lifetime of effect, development and deployment timescale, reversibility, and failure risks.

We present a detailed review that builds on earlier work by including the most recent literature, and is more extensive than previous comparative frameworks. Solar radiation management propsals are most effective but short-lived, whilst carbon dioxide removal measures gain effectiveness the longer they are pursued. Solar radiation management could restore the global radiative balance, but must be maintained to avoid abrupt warming, meanwhile ocean acidification and residual regional climate changes would still occur.

Tackling Regional Climate Change By Leaf Albedo Bio-geoengineering: Current Biology. To view the full text, please login as a subscribed user or purchase a subscription. Click here to view the full text on ScienceDirect. Figure 1 World Cropland Area. Benefits, risks, and costs of stratospheric geoengineering - Robock - 2009 - Geophysical Research Letters. [11] Robock [2008a] suggested that the construction and operation of a system to inject aerosol precursors into the stratosphere might be very expensive. Here we analyze the costs of three suggested methods of placing the aerosol precursors into the stratosphere: airplanes, artillery shells, and stratospheric balloons (Figure 1 and Table 2).

Because such systems do not currently exist, the estimates presented here are rough but provide quantitative starting points for further discussions of the practicality of geoengineering. Even if sulfate aerosol precursors could be injected into the stratosphere, it is not clear that aerosols could be created of a size range with an effective radius of about 0.5 μm, like volcanic aerosols, that would be effective at cooling the planet. Some of these issues were discussed by Rasch et al. [2008a]. Can injectors be designed to give appropriate initial aerosol sizes? An overview of geoengineering of climate using stratospheric sulphate aerosols.

Exploring the geoengineering of climate using stratospheric sulfate aerosols: The role of particle size - Rasch - 2008 - Geophysical Research Letters. 8693.pdf. The Climate Fixers - The New Yorker. Geoengineering could make climate change’s impacts worse. A professor from Washington University, Seattle, has warned that climate engineering, or geoengineering, could have unknown consequences in decades to come and has said there needs to be a debate on the ethical issues around the practice.

‘Climate Hacking’ Would Be Easy – That Doesn’t Mean We Should Do It. Scientists Propose First Major Framework for Climate Engineering Experiments. Professor Steve Rayner, the co-director of the Oxford Geoengineering Programme, has unveiled a proposal to create the first serious framework for future geoengineering experiments. It's a sign that what are still considered drastic and risky measures to combat climate change, like artificially injecting tiny particles into the Earth's atmosphere to reflect sunlight back into space, are drifting further into the purview of mainstream science. The august scientific body has issued a call to create "an open and transparent review process that ensures such experiments have the necessary social license to operate.

" Rayner, who served on the Royal Society of London's Working Group on Climate Geoengineering, released what's been christened the 'Berlin Declaration', at the world's first major climate engineering conference currently underway in Germany. Graphic: SPICE Dr. "There's a real possibility that this governance, or regulations, could hurt climate science," he said. Geo-engineering and climate change: Stopping a scorcher. Climate & Geoengineering. Scientist David Keith On Slowing Global Warming With Geoengineering. While delegates meeting in Warsaw at the United Nations climate talks push for targets for reducing greenhouse gases, a small splinter group of scientists is promoting an entirely different approach to fighting climate change: They want to artficially manipulate the planet's climate to help stop global warming.