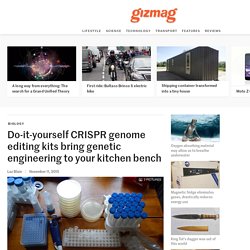 Now, one synthetic biologist from NASA plans to make it as accessible as a home science kit, so you can bio-hack yeast and bacteria on your kitchen bench. The War Over Genome Editing Just Got a Lot More Interesting. If you want to drop some real DNA editing knowledge—like, I don’t know, at a party! 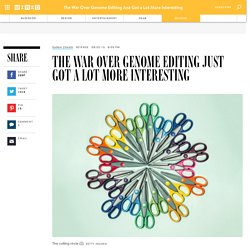 —here’s a tip. Instead of calling the much hyped precise genome-editing tool CRISPR, call it CRISPR/Cas9. CRISPR, you see, just refers to stretches of repeating DNA that sit near the gene for Cas9, the actual protein that does the DNA editing. The discovery comes at a time when CRISPR/Cas9 is sweeping through biology labs. So revolutionary is this new genome editing technique that rival groups, who each claim to have been first to the tech, are bitterly fighting over the CRISPR/Cas9 patent. And there’s good reason to think more useful CRISPR proteins are out there. “There are definitely many more defense systems out there, and maybe some of them might even have spectacular applications like with the Cas9 system,” says John van der Oost, a microbiologist at Wageningen University who is a co-author on the paper.

Many different proteins are associated with CRISPR. The Obscure Protein. The Environmental Impact of GMOs. The debate around genetically modified organisms (GMO) is huge and heated on either side. 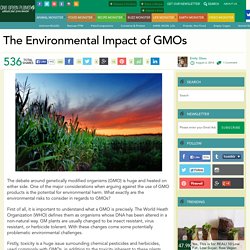 One of the major considerations when arguing against the use of GMO products is the potential for environmental harm. What exactly are the environmental risks to consider in regards to GMOs? Gently modified - Economist. The Regulation of GMOs in Europe and the United States: A Case-Study of Contemporary European Regulatory Politics. This paper was prepared for a workshop on trans-Atlantic differences in GMO regulation sponsored by the Council of Foreign Relations. 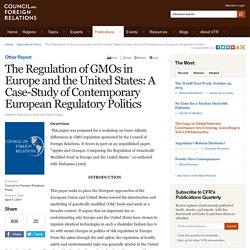 It draws in part on an unpublished paper, "Apples and Oranges: Comparing the Regulation of Genetically Modified Food in Europe and the United States," co-authored with Diahanna Lynch. This paper seeks to place the divergent approaches of the European Union and United States toward the introduction and marketing of genetically modified (GM) foods and seeds in a broader context.

It argues that an important key to understanding why Europe and the United States have chosen to regulate identical technologies in such a dissimilar fashion has to do with recent changes in politics of risk regulation in Europe. From the 1960s through the mid 1980s, the regulation of health, safety and environmental risks was generally stricter in the United States than in Europe. The Trouble With the Genetically Modified Future. Like many people, I've long wondered about the safety of genetically modified organisms. 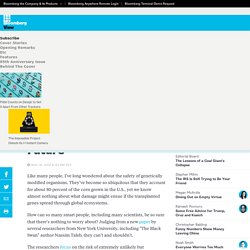 They've become so ubiquitous that they account for about 80 percent of the corn grown in the U.S., yet we know almost nothing about what damage might ensue if the transplanted genes spread through global ecosystems. How can so many smart people, including many scientists, be so sure that there's nothing to worry about? Judging from a new paper by several researchers from New York University, including "The Black Swan" author Nassim Taleb, they can't and shouldn't. Regulating gene drives. + Author Affiliations ↵†Corresponding author. oye@mit.edu Genes in sexually reproducing organisms normally have, on average, a 50% chance of being inherited, but some genes have a higher chance of being inherited. 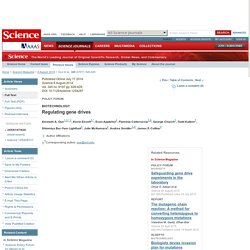 These genes can increase in relative frequency in a population even if they reduce the odds that each organism will reproduce. CRISPR: the good, the bad and the unknown. Gene-edited 'micropigs' to be sold as pets at Chinese institute. BGI showcases its micropigs at a summit in Shenzhen, China. 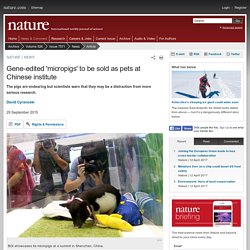 Cutting-edge gene-editing techniques have produced an unexpected byproduct — tiny pigs that a leading Chinese genomics institute will soon sell as pets. BGI in Shenzhen, the genomics institute that is famous for a series of high-profile breakthroughs in genomic sequencing, originally created the micropigs as models for human disease, by applying a gene-editing technique to a small breed of pig known as Bama. On 23 September, at the Shenzhen International Biotech Leaders Summit in China, BGI revealed that it would start selling the pigs as pets. The animals weigh about 15 kilograms when mature, or about the same as a medium-sized dog. At the summit, the institute quoted a price tag of 10,000 yuan (US$1,600) for the micropigs, but that was just to "help us better evaluate the market”, says Yong Li, technical director of BGI’s animal-science platform. Animal models. CRISPR/Cas9 and Targeted Genome Editing: A New Era in Molecular Biology. The development of efficient and reliable ways to make precise, targeted changes to the genome of living cells is a long-standing goal for biomedical researchers. 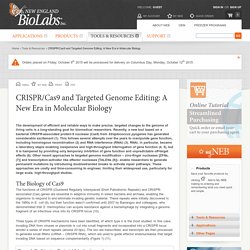 Science Would Like Some Rules for Genome Editing, Please. The ability to edit a genome as easily as cutting-and-pasting with a word processor is quickly becoming a world-changing, moneymaking technology. 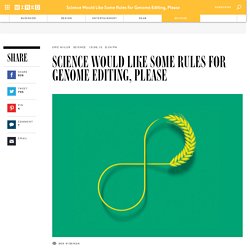 Just about every scientist working with agrees on that. But as to the rules guiding what they are and aren’t allowed to do with it? That’s a different story. It’s a story, though, that those researchers are trying to tell—especially this week, at an international meeting in Washington DC that has attracted most of the major players from the US, Europe, and even China, where many of the ethical edge cases have made their way out of labs. That work is on everyone’s minds, from an attempt to work with human embryos last year to last week’s word of customized pet micro-pigs. Web of Science [v.5.19] - All Databases Full Record. Volume: Issue: Pages: Published: View Journal Information Data from the 2014 edition of Journal Citation Reports® 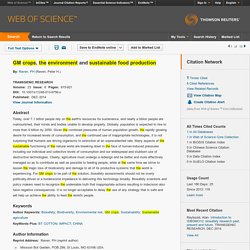 Web of Science [v.5.19] - All Databases Full Record. Volume: Issue: Pages: Newsweek: CRISPR gene editing could 'save world from hunger' if anti-GMO opponents do not block it. Ethical and regulatory reflections on CRISPR gene editing revolution. Regulate gene editing in wild animals. Gene editing is a hot topic following a flurry of interest in the use of CRISPR tools to modify human embryos. As an ethicist in a genome-engineering lab, I am an eyewitness to these recent scientific developments and I do have concerns about the way gene editing could be used.

But they are not the concerns you might expect. The ethical issues raised by human germline engineering are not new. They deserve consideration, but outcry over designer babies and precision gene therapy should not blind us to a much more pressing problem: the increasing use of CRISPR to edit the genomes of wild animal populations.

Unless properly regulated and contained, this research has the potential to rapidly alter ecosystems in irreversible and damaging ways. Scientists have already used CRISPR to modify mosquitoes and the fruit fly Drosophila melanogaster. "Gene Drives" And CRISPR Could Revolutionize Ecosystem Management - Guest Blog - Scientific American Blog Network. Easy DNA Editing Will Remake the World. Buckle Up. Opinion: Is CRISPR-based gene drive a biocontrol silver bullet or global conservation threat? Author Affiliations Scientists have recognized the potential for applying gene drive technologies to the control of invasive species for several years (1, 2), yet debate about the application of gene drive has been primarily restricted to mosquitoes (3).

Special Collection: The CRISPR Revolution. Val Altounian/Science Biologists continue to hone their tools for deleting, replacing or otherwise editing DNA and a strategy called CRISPR has quickly become one of the most popular ways to do genome engineering. Utilizing a modified bacterial protein and a RNA that guides it to a specific DNA sequence, the CRISPR system provides unprecedented control over genes in many species, including perhaps humans. Biohackers gear up for genome editing. Preston Gannaway Biohackers such as Johan Sosa are exploring the creative potential of molecular biology. A complete lack of formal scientific training has not kept Johan Sosa from dabbling with one of the most powerful molecular-biology tools to come along in decades. Everything You Need to Know About CRISPR, the New Tool that Edits DNA.