Are 3D-Printed, Living Ecosystems The Food Of Our Future? 11 Food 3D Printers from the Future. Why 3D food printing is more than just a novelty — it’s the future of food. It was Marcel Boulestin, the first cook-turned-television star from the BBC’s 1937 show Cook’s Night Out, who insisted that cooking was not chemistry but an art. 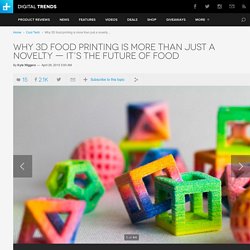 “It requires instinct and taste rather than exact measurements,” he said. If only he could see the world now. It’s 2015, and 3D printing, a technology long priced beyond many people’s reach, is quickly undergoing democratization. So much democratization that companies are trying to 3D print all kinds of new things, including food. Think about the replicators on Star Trek and the many other machines that litter science fiction movies, which prep, cook, and serve meals on command. 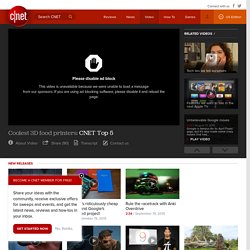 But the most revolutionary 3-D printer might be the one we keep in our kitchen. I'm Donald Bell and in this Top 5, I'm counting down the most promising food printers. Pulled from a list of 11, published over at www.3dprintingindustry.com. Some are available right now and some are getting the kinks worked out. So I ranked this list on my gut sense of they're overall commercial appeal. 5 amazing ways 3-D-printed food will change the way we eat.

With 3-D printing chefs can be more detailed than ever. (3D Systems) Journey to the frontier of food and you’ll find a 3-D printer, spewing out chocolate. 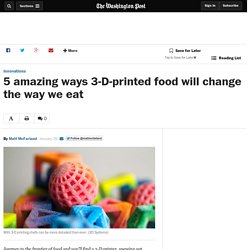 XYZPrinting shows off their $500 3D Food Printer at CES 2015 in Las Vegas. Jan 6, 2015 | By Alec Many consider food printing to be the holy grail of 3D printing technology. 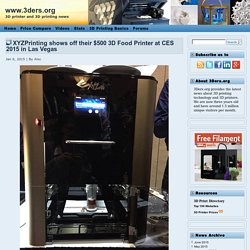 After all, its potential market consists of every kitchen with a microwave, and not just the garages of tinkerers and hobbyists. It’s therefore hardly surprising that so many companies and start-ups are looking at different possibilities and 'food filaments'. And while this is still very much an on-going process, several companies are closer to actual results than others. The Taiwan-based XYZPrinting (owned by the Kinpo Group) is especially known for its basic 3D printers in the sub $500 range, but has already made substantial progress with a marketable Food Printer too. XYZPrinting also revealed more about its specifics.

In a nutshell, their Food Printer is a device that can 3D print chocolate, sugar, cookie dough, icing, and similar uncooked treats. The printer’s full specifications are: Movie: Chloé Rutzerveld on her 3D-printed food Edible Growth. 3D-printing with living organisms "could transform the food industry" Dezeen and MINI Frontiers: food designer Chloé Rutzerveld has developed a concept for "healthy and sustainable" 3D-printed snacks that sprout plants and mushrooms for flavour (+ movie). 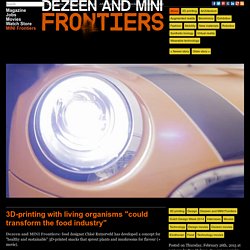 Rutzerveld's Edible Growth project consists of 3D-printed shapes containing a mixture of seeds, spores and yeast, which will start to grow after only a few days. Will 3D printed food become as common as the microwave? - Fortune. Lynette Kucsma wants to sell the 21st century’s version of the microwave. 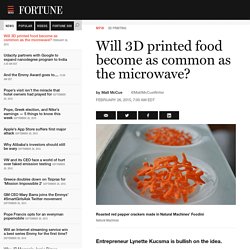 The “Foodini”—an automated meal-assembly machine that creates homemade meals faster and more efficiently than human hands—is the first product by Natural Machines, Kucsma’s company. Natural Machines is marketing the Foodini as a 3D food printer. That sort of futuristic branding may scare consumers from the supremely out-there concept. Kucsma’s not worried, though. “When people first heard about microwaves they didn’t understand the technology, but now 90% of households have microwaves,” she says. In reality, the Foodini isn’t a 3D printer, per se. 3D printers generally run at one speed and handle a single ingredient: plastic.

Natural Machines’s first iteration of the Foodini works best for time-consuming projects like pasta, elaborately shaped breads and cookies. Version 1.0 can’t cook or heat food, but Kucsma expects to add those features in future Foodini models. Foodini will go on sale in the mid-2015. Forbes Welcome. Nestle Researches 3D Food Printing. Star Trek Inspires Nestle to Work on Personalized Nutrition Project. EU Works on Food Printer to Create Personalized Meals for the Elderly. Food. 11 Food 3D Printers from the Future. 3D Printed Foods Are Approaching. All the Food That's Fit to 3D Print, From Chocolates to Pizza. Although squeezing out food, layer by layer, from a 3D printer may not yet be particularly efficient—nor sound that tasty—companies are already testing how the Jetsons-esque technology can transform the way we eat. 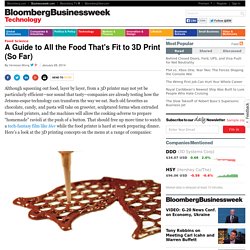 Such old favorites as chocolate, candy, and pasta will take on groovier, sculptured forms when extruded from food printers, and the machines will allow the cooking-adverse to prepare “homemade” ravioli at the push of a button. The future of food is 3D printed. The Foodini 3D Food Printer Hits Kickstarter! Natural Machines: The makers of Foodini - a 3D food printer making all types of fresh, nutritious foods. 3D-food printer offers the prospect of hamburgers printed to go. Much of science fiction becomes science fact some day (faster-than-light travel notwithstanding), and this year seems to be the turn of Star Trek's replicator: a new Kickstarter is $50,000 into its goal to build a 3D-food printer, capable of turning fresh ingredients into a meal without cooks having to get their hands dirty. 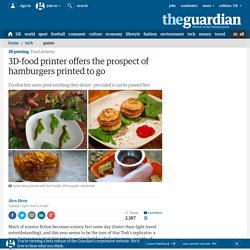 The Foodini is described by its manufacturers as "the first 3D-food printer to print all types of real, fresh, nutritious foods, from savory to sweet". They've already made a prototype, and are trying to raise $100,000 to begin a full production run. The printer works by taking fresh ingredients, prepared for printing by cooking and blending, and extruding them through a nozzle on to a a glass plate.

It might not sound particularly appetising, but with the right ingredients, the printer could save time and effort, or make intricate designs that would be impossible to replicate by hand. Barilla's 3D Printed Pasta Contest. Food Innovations. Printer produces personalised 3D chocolate. 5 July 2011Last updated at 15:08 By Katia Moskvitch Technology reporter, BBC News The printer uses chocolate instead of ink Chocolate lovers may soon be able to print their own 3D creations thanks to work by UK scientists. 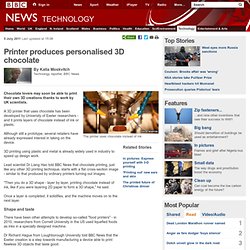 A 3D printer that uses chocolate has been developed by University of Exeter researchers - and it prints layers of chocolate instead of ink or plastic. Although still a prototype, several retailers have already expressed interest in taking on the device. 3D printing using plastic and metal is already widely used in industry to speed up design work. 3D Fruit Printer Makes Strawberry Flavored Raspberry. 3-D Printed Space Food For the Gourmet Astronaut. 3D printing is a genuinely incredible new technology. 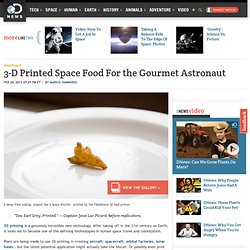 After taking off in the 21st century on Earth, it looks set to become one of the defining technologies in human space travel and colonization. Plans are being made to use 3D printing in creating aircraft, spacecraft, orbital factories, lunar bases… but the latest potential application might actually take the biscuit. Or possibly even print it. 3D Printing: Food in Space. 3D-printed pizza and tech 'groundbreaking' for ISS. Nate Lanxon Editor of Wired.co.uk The future potential of the food and manufacturing industries may be found in the eyes of entrepreneurs and companies literally looking to the stars.

That was the take-home point from several speeches made at Maker Faire in Rome, which WIRED.co.uk is attending. More specifically, astronauts aboard the International Space Station (ISS) are already looking to be able to manufacture new components for their missions while in orbit around Earth -- and that includes the components for food. 3D Printed Airplane Food: Tomorrow's Airline Meals? US Army Might Use Food Printers in the Future. US military developing Star Trek-like 3D food printer to improve awful MRE rations.