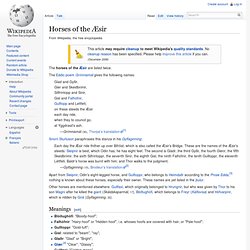 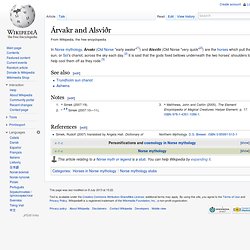 Svaðilfari. Loki and Svadilfari (1909) by Dorothy Hardy In Norse mythology, Svaðilfari (Old Norse "unlucky traveler"[1]) is a stallion that fathered the eight-legged horse Sleipnir with Loki (in the form of a mare). 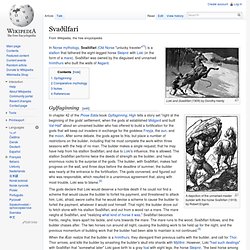 Svaðilfari was owned by the disguised and unnamed hrimthurs who built the walls of Asgard. Gylfaginning[edit] A depiction of the unnamed master builder with the horse Svaðilfari (1919) by Robert Engels. The gods declare that Loki would deserve a horrible death if he could not find a scheme that would cause the builder to forfeit his payment, and threatened to attack him.

When the Æsir realize that the builder is a hrimthurs, they disregard their previous oaths with the builder, and call for Thor. Comparative mythology[edit] In a Bulgarian epic, the hero Marko is promised in marriage a "weird widow" if he can "construct a tower, but cannot finish the building for want of one last building stone. " Notes[edit] References[edit] Faulkes, Anthony (Trans.) (1995). Sleipnir. Additionally, Sleipnir is mentioned in a riddle found in the 13th century legendary saga Hervarar saga ok Heiðreks, in the 13th century legendary saga Völsunga saga as the ancestor of the horse Grani, and book I of Gesta Danorum, written in the 12th century by Saxo Grammaticus, contains an episode considered by many scholars to involve Sleipnir. 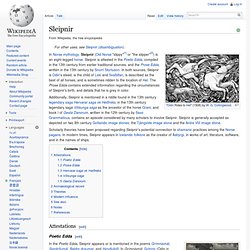 Sleipnir is generally accepted as depicted on two 8th century Gotlandic image stones; the Tjängvide image stone and the Ardre VIII image stone. Scholarly theories have been proposed regarding Sleipnir's potential connection to shamanic practices among the Norse pagans. In modern times, Sleipnir appears in Icelandic folklore as the creator of Ásbyrgi, in works of art, literature, software, and in the names of ships. Attestations[edit] Poetic Edda[edit] Prose Edda[edit] An illustration of Odin riding Sleipnir from an 18th-century Icelandic manuscript. In chapter 16 of the book Skáldskaparmál, a kenning given for Loki is "relative of Sleipnir 36. Gullfaxi. Gullfaxi. 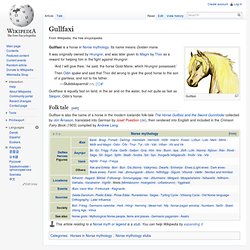 Gullfaxi is a horse in Norse mythology. Its name means Golden mane. It was originally owned by Hrungnir, and was later given to Magni by Thor as a reward for helping him in the fight against Hrungnir: 'And I will give thee,' he said, the horse Gold-Mane, which Hrungnir possessed.' Then Odin spake and said that Thor did wrong to give the good horse to the son of a giantess, and not to his father. —Skáldskaparmál (17), [1] Guldfaxe is equally fast on land, in the air and on the water, but not quite as fast as Sleipnir, Odin's horse. Skinfaxi and Hrímfaxi. "Dagr" (1874) by Peter Nicolai Arbo. 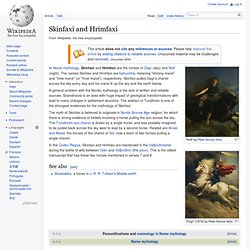 In Norse mythology, Skinfaxi and Hrímfaxi are the horses of Dagr (day) and Nótt (night). The names Skinfaxi and Hrímfaxi are bahuvrihis, meaning "shining mane" and "rime mane" (or "frost mane"), respectively. Skinfaxi pulled Dagr's chariot across the sky every day and his mane lit up the sky and the earth below. A general problem with the Nordic mythology is the lack of written and reliable sources. Scandinavia is an area with huge impact of geological transformations with lead to many changes in settlement structure. Gná and Hófvarpnir. Gná is flanked by the horse Hófvarpnir, while standing before the enthroned Frigg in an illustration (1882) by Carl Emil Doepler In Norse mythology, Gná is a goddess who runs errands in other worlds for the goddess Frigg and rides the flying, sea-treading horse Hófvarpnir (Old Norse "he who throws his hoofs about",[1] "hoof-thrower"[2] or "hoof kicker"[3]). 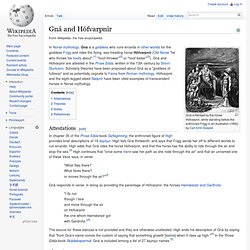 Gná and Hófvarpnir are attested in the Prose Edda, written in the 13th century by Snorri Sturluson. Scholarly theories have been proposed about Gná as a "goddess of fullness" and as potentially cognate to Fama from Roman mythology. Hófvarpnir and the eight-legged steed Sleipnir have been cited examples of transcendent horses in Norse mythology. Attestations[edit] In chapter 35 of the Prose Edda book Gylfaginning, the enthroned figure of High provides brief descriptions of 16 ásynjur. "What flies there?