Unicorn. Of the Unicorn In European folklore, the unicorn is often depicted as a white horselike or goatlike animal with a long horn and cloven hooves (sometimes a goat's beard). 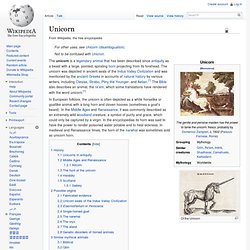 In the Middle Ages and Renaissance, it was commonly described as an extremely wild woodland creature, a symbol of purity and grace, which could only be captured by a virgin. In the encyclopedias its horn was said to have the power to render poisoned water potable and to heal sickness. In medieval and Renaissance times, the horn of the narwhal was sometimes sold as unicorn horn.

History Unicorns in antiquity Cosmas Indicopleustes, a merchant of Alexandria who lived in the 6th century, made a voyage to India and subsequently wrote works on cosmography. Middle Ages and Renaissance. Hippocamp. The hippocampus or hippocamp, also hippokampoi (plural: hippocampi or hippocamps; Greek: ἱππόκαμπος, from ἵππος, "horse" and κάμπος, "monster"[1]), often called a sea-horse[2] in English, is a mythological creature shared by Phoenician[3] and Greek mythology, though the name by which it is recognised is purely Greek. 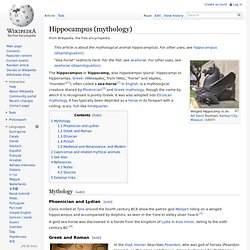 It was also adopted into Etruscan mythology. It has typically been depicted as a horse in its forepart with a coiling, scaly, fish-like hindquarter. Coins minted at Tyre around the fourth century BCE show the patron god Melqart riding on a winged hippocampus and accompanied by dolphins, as seen in the Yizre'el Valley silver hoard.[3] A gold sea-horse was discovered in a horde from the kingdom of Lydia in Asia minor, dating to the sixth century BC.[4] The appearance of hippocampi in both freshwater and saltwater is counter-intuitive to a modern audience, though not to an ancient one. The sea-horse also appears in Pictish stone carvings in Scotland. Hippalectryon. The oldest representation currently known dates back to the 9th century BCE, and the motif grows most common in the 6th century, notably in vase painting and sometimes as statues, often shown with a rider. 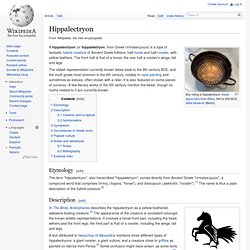 It is also featured on some pieces of currency. A few literary works of the 5th century mention the beast, though no myths related to it are currently known. Etymology[edit] The term "hippalectryon", also transcribed "hippalektryon", comes directly from Ancient Greek "ἱππαλεκτρυών", a compound word that comprises ἵππος (híppos, "horse"), and ἀλεκτρυών (alektryốn, "rooster").[1] The name is thus a plain description of the hybrid creature.[2] Description[edit] Mares of Diomedes. The Eighth Labour of Heracles[edit] After capturing the Cretan bull, Heracles was to steal the Mares. 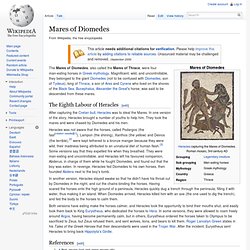 In one version of the story, Heracles brought a number of youths to help him. They took the mares and were chased by Diomedes and his men. Heracles was not aware that the horses, called Podargos (the fast[citation needed][1]), Lampon (the shining), Xanthos (the yellow) and Deinos (the terrible),[2] were kept tethered to a bronze manger because they were wild; their madness being attributed to an unnatural diet of human flesh.[3] Some versions say that they expelled fire when they breathed. Centaur. Brooklyn Museum - Centauress - John La Farge - overall A centaur (/ˈsɛntɔːr/; Greek: Κένταυρος, Kéntauros, Latin: centaurus) or hippocentaur[1][2][3] is a mythological creature with the head, arms, and torso of a human and the body and legs of a horse.[4] In early Attic and Beotian vase-paintings (see below), they are depicted with the hindquarters of a horse attached to them; in later renderings centaurs are given the torso of a human joined at the waist to the horse's withers, where the horse's neck would be. 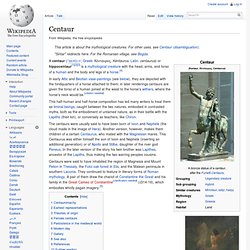 [citation needed] This half-human and half-horse composition has led many writers to treat them as liminal beings, caught between the two natures, embodied in contrasted myths, both as the embodiment of untamed nature, as in their battle with the Lapiths (their kin), or conversely as teachers, like Chiron. Balius and Xanthus. Balius (/ˈbeɪliəs/; Βάλιος, Balios, possibly "dappled") and Xanthus (/ˈzænθəs/; Ξάνθος, Xanthos, "blonde") were, according to Greek mythology, two immortal horses, the offspring of the harpy Podarge and the West wind, Zephyros (Latin Zephyrus); following another tradition, their father was Zeus. 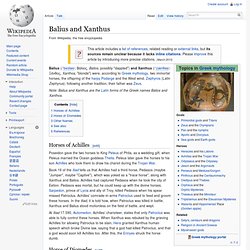 Note: Balius and Xanthus are the Latin forms of the Greek names Balios and Xanthos. Horses of Achilles[edit] Poseidon gave the two horses to King Peleus of Phtia, as a wedding gift, when Peleus married the Ocean goddess Thetis. Peleus later gave the horses to his son Achilles who took them to draw his chariot during the Trojan War. Book 16 of the Iliad tells us that Achilles had a third horse, Pedasos (maybe "Jumper", maybe "Captive"), which was yoked as a "trace horse", along with Xanthus and Balios. At Iliad 17.590, Automedon, Achilles' charioteer, states that only Patroclus was able to fully control these horses. Horse of Diomedes[edit] Other Names[edit] BaliosXanthiusXanthos See also[edit] Pegasus.