Gawain and his brothers.

Gareth. Sir Gareth [ˈɡarɛθ] was a Knight of the Round Table in Arthurian Legend. 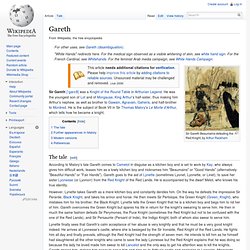 He was the youngest son of Lot and of Morgause, King Arthur's half-sister, thus making him Arthur's nephew, as well as brother to Gawain, Agravain, Gaheris, and half-brother to Mordred. He is the subject of Book VII in Sir Thomas Malory's Le Morte d'Arthur, which tells how he became a knight. The tale[edit] Lynette finally sees that Gareth's calm acceptance of her abuse is very knightly and that he must be a very good knight indeed. Gawain. Sir Gawaine the Son of Lot, King of Orkney, by Howard Pyle from The Story of King Arthur and His Knights. (1903) Gawain (/ɡəˈweɪn/, [ˈɡawain]; also called Gwalchmei, Gualguanus, Gauvain, Walwein, etc.) is King Arthur's nephew and a Knight of the Round Table in the Arthurian legend. 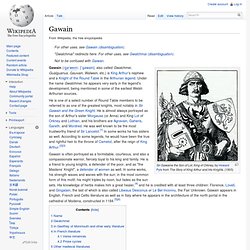 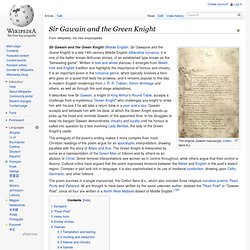 It describes how Sir Gawain, a knight of King Arthur's Round Table, accepts a challenge from a mysterious "Green Knight" who challenges any knight to strike him with his axe if he will take a return blow in a year and a day. Gawain accepts and beheads him with his blow, at which the Green Knight stands up, picks up his head and reminds Gawain of the appointed time.

In his struggles to keep his bargain Gawain demonstrates chivalry and loyalty until his honour is called into question by a test involving Lady Bertilak, the lady of the Green Knight's castle. The ambiguity of the poem's ending makes it more complex than most. Christian readings of the poem argue for an apocalyptic interpretation, drawing parallels with the story of Adam and Eve.

Synopsis[edit] Green Knight. A painting from the original Gawain manuscript. 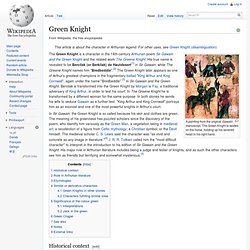 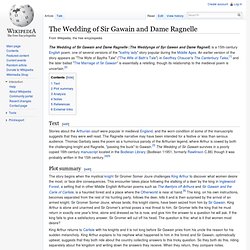 An earlier version of the story appears as "The Wyfe of Bayths Tale" ("The Wife of Bath's Tale") in Geoffrey Chaucer's The Canterbury Tales,[1] and the later ballad "The Marriage of Sir Gawain" is essentially a retelling, though its relationship to the medieval poem is uncertain.[2] Text[edit] Stories about the Arthurian court were popular in medieval England, and the worn condition of some of the manuscripts suggests that they were well read. The Ragnelle narrative may have been intended for a festive or less than serious audience. Plot summary[edit] The story begins when the mystical knight Sir Gromer Somer Joure challenges King Arthur to discover what women desire the most, or face dire consequences. Agravain. Sir Agravain[pronunciation?] 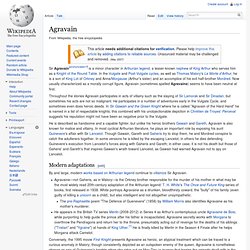 Is a minor character in Arthurian legend, a lesser-known nephew of King Arthur who serves him as a Knight of the Round Table. In the Vulgate and Post-Vulgate cycles, as well as Thomas Malory's Le Morte d'Arthur, he is a son of King Lot of Orkney and Anna/Morgause (Arthur's sister) and an accomplice of his evil half-brother Mordred. Now usually characterized as a morally corrupt figure, Agravain (sometimes spelled Agravaine) seems to have been neutral at first. Throughout the stories Agravain participates in acts of villainy such as the slaying of Sir Lamorak and Sir Dinadan, but sometimes his acts are not so malignant. He participates in a number of adventures early in the Vulgate Cycle, and sometimes even does heroic deeds. He is described as handsome and a capable fighter, but unlike his heroic brothers Gawain and Gareth, Agravain is also known for malice and villainy.

Modern adaptations[edit] See also[edit] 9503 Agrawain, an asteroid named for Sir Agravain. Gaheris. Role in Arthurian tradition[edit] In Thomas Malory's Le Morte d'Arthur, Gaheris is squire to his elder brother Gawain, whose fiery temper he helps moderate, before being knighted himself. 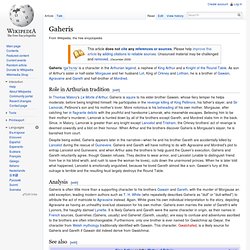 He participates in the revenge killing of King Pellinore, his father's slayer, and Sir Lamorak, Pellinore's son and his mother's lover. More notorious is his beheading of his own mother, Morgause, after catching her in flagrante delicto with the youthful and handsome Lamorak, who meanwhile escapes. Believing him to be their mother's murderer, Lamorak is hunted down by all of the brothers except Gareth, and Mordred stabs him in the back. Since, in Malory, Lamorak is greater than any knight except Lancelot and Tristram, the Orkney brothers' act of revenge is deemed cowardly and a blot on their honour. Despite being exiled, Gaheris appears later in the narrative—when he and his brother Gareth are accidentally killed by Lancelot during the rescue of Guinevere. Analysis[edit] See also[edit]