How the New York Times and CNN try to keep up with the tech comp. "The New York Times is now as much a technology company as a journalism company," its executive editor Bill Keller said recently. 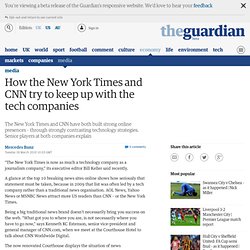 A glance at the top 10 breaking news sites online shows how seriously that statement must be taken, because in 2009 that list was often led by a tech company rather than a traditional news organisation. AOL News, Yahoo News or MSNBC News attract more US readers than CNN – or the New York Times. Being a big traditional news brand doesn't necessarily bring you success on the web. "What got you to where you are, is not necessarily where you have to go now," says Kenneth KC Estenson, senior vice-president and general manager of CNN.com, when we meet at the Courthouse Hotel to talk about CNN Worldwide Digital. The now renovated Courthouse displays the situation of news organisations perfectly: lots of nicely renovated rooms, but no windows to get what happens outside. Today, to get the platform right is as important as the quality of the content. Conclusion.

Media Engineers Are Becoming A Reality... Posted by Tom Foremski - January 18, 2010 I have been writing about the need for media engineers since 2005 -- these are people who are part journalist and part software engineer. 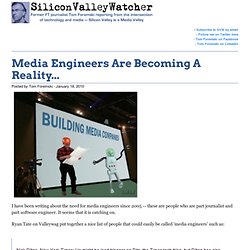 It seems that it is catching on. Ryan Tate on Valleywag put together a nice list of people that could easily be called 'media engineers' such as: Nick Bilton, New York Times: He might be lead blogger on Bits, the Times tech blog, but Bilton has also worked as a user interface specialist and hardware hacker in the Times R&D lab, helping to develop the TimesReader. Hack to Hacker: Rise of the Journalist-Programmer - journalismis. The coming era of the media engineer and media entrepreneur - SV. Posted by Tom Foremski - August 19, 2005 . . . software engineer era ending There are tens of millions of programmers entering the world's job markets annually. 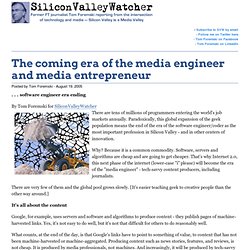 Paradoxically, this global expansion of the geek population means the end of the era of the software engineer/coder as the most important profession in Silicon Valley - and in other centers of innovation. Why? Journalism Schools Wake Up To Need For Media Engineers. Posted by Tom Foremski - May 12, 2009 About four years ago I began writing about the need for "media engineers" a skill set that is part journalist and part software engineer. 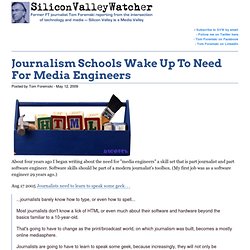 Software skills should be part of a modern journalist's toolbox. (My first job was as a software engineer 29 years ago.) Aug 17 2005 Journalists need to learn to speak some geek. . . ...journalists barely know how to type, or even how to spell... Aug 19 2005 The coming era of the media engineer and media entrepreneur This is now the era of the media engineer and media entrepreneur because the future is all about technology-enabled media companies. It's been a long wait but I was very happy to see this article by Leena Rao over at TechCrunch: Calling All Coders: Journalism Schools Want You To Save The News Industry. MediaWatch: An Example Of Data Journalism. Posted by Tom Foremski - October 28, 2009 For several years I've been writing about the need for "media engineers" part software engineer and part journalist. 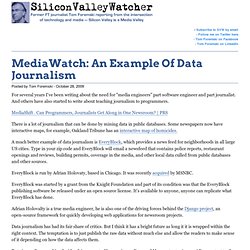 And others have also started to write about teaching journalism to programmers. MediaShift . Can Programmers, Journalists Get Along in One Newsroom? | PBS There is a lot of journalism that can be done by mining data in public databases. A much better example of data journalism is EveryBlock, which provides a news feed for neighborhoods in all large US cities. EveryBlock is run by Adrian Holovaty, based in Chicago. EveryBlock was started by a grant from the Knight Foundation and part of its condition was that the EveryBlock publishing software be released under an open source license. Adrian Holovalty is a true media engineer, he is also one of the driving forces behind the Django project, an open-source framework for quickly developing web applications for newsroom projects. 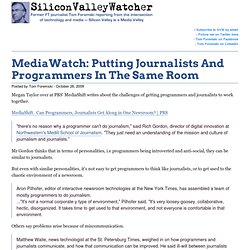 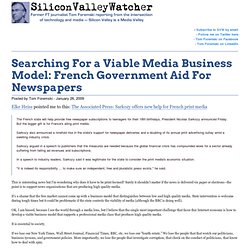 But the bigger gift is for France's ailing print media. Sarkozy also announced a ninefold rise in the state's support for newspaper deliveries and a doubling of its annual print advertising outlay amid a swelling industry crisis. Sarkozy argued in a speech to publishers that the measures are needed because the global financial crisis has compounded woes for a sector already suffering from falling ad revenues and subscriptions. Ten Basic New Media Skills Journalists Need To Know. Posted by Tom Foremski - March 31, 2008 Software engineers have to update their bag of skills constantly. 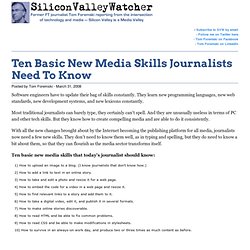 They learn new programming languages, new web standards, new development systems, and new lexicons constantly. Most traditional journalists can barely type, they certainly can't spell. Getting the CSS Internet 2.0 religion . . . . . . . . . (don't m. Posted by Tom Foremski - October 17, 2006 The past few days I've been working on my CSS skills--the media technology that lies at the heart of this next phase of the Internet. 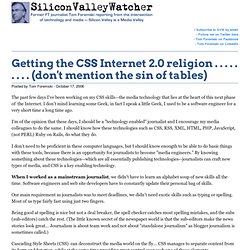 I don't mind learning some Geek, in fact I speak a little Geek, I used to be a software engineer for a very short time a long time ago. I'm of the opinion that these days, I should be a "technology enabled" journalist and I encourage my media colleagues to do the same. I should know how these technologies such as CSS, RSS, XML, HTML, PHP, JavaScript, (not PERL) Ruby on Rails, do what they do. I don't need to be proficient in these computer languages, but I should know enougth to be able to do basic things with these tools, because there is an opportunity for journalists to become "media engineers. " When I worked as a mainstream journalist, we didn't have to learn an alphabet soup of new skills all the time. Cascading Style Sheets (CSS) can deconstruct the media world on the fly... Hacks and Hackers (San Francisco, CA) - Meetup.com.