Netflix will be recast from ally to villain. 8 tips from Siri's cofounder: How to build a company that really matters. Practically every day a new startup launches, each with the hope of solving a particular problem its founders have identified. 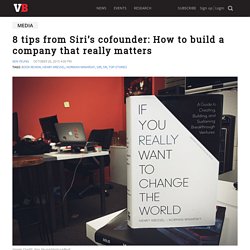 Whether in the consumer, enterprise, ad-tech, or publishing space, there’s always at least one innovator trying to create something unique: a so-called breakthrough service that’ll be the next SpaceX or Facebook. Many will try, but let’s be honest in admitting that very few will likely succeed. “If You Really Want To Change The World” offers insight and concrete steps the hopeful can take to advance their dreams of building something meaningful and long-lasting. How to make a company that matters In order to provide an actionable framework, Kressel and Winarsky have boiled their lessons down to eight key points: Identify a large market opportunity with potential for rapid growth. Welcome to hell: Apple vs. Google vs. Facebook and the slow death of the web. So let's talk about ad blocking. 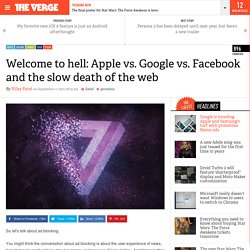 You might think the conversation about ad blocking is about the user experience of news, but what we're really talking about is money and power in Silicon Valley. Tech-Media Mergers’ Flimsy Script. The Creative Apocalypse That Wasn’t. AwesomenessTV Debuts Young Adult Book Publishing Division Awesomeness Ink. Comcast Courts Online Publishers in the Battle for Cord Cutters. Quinn: SF tech firms too focused on solving problems for First World elite. SAN FRANCISCO -- Oh, the problems being solved by the engineering might at tech firms here! 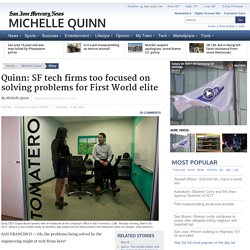 A mobile app that sends you locally sourced, 700-calorie meals. Digital Ad Spending Will Hit $41.8 Billion, Surpass Broadcast TV In 2015. Apple’s TV Plans Will Help To Create A “Mega-Ecosystem,” Carl Icahn Says. Zappos holacracy: Many employees choose to leave instead of work with no boss. Photo by Ethan Miller/Getty Images. 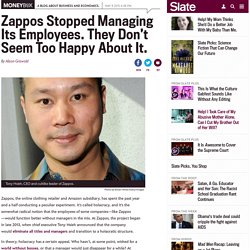 Augmented And Virtual Reality To Hit $150 Billion, Disrupting Mobile By 2020. Editor’s note: Tim Merel is the managing director of Digi-Capital. 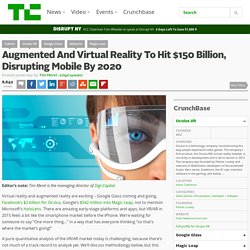 Virtual reality and augmented reality are exciting – Google Glass coming and going, Facebook’s $2 billion for Oculus, Google’s $542 million into Magic Leap, not to mention Microsoft’s HoloLens. There are amazing early-stage platforms and apps, but VR/AR in 2015 feels a bit like the smartphone market before the iPhone. What You Should Know About Meerkat, The Hot New Video App. Millennials Are Elusive Prey for Pay-TV Companies - Bloomberg Business. (Bloomberg) -- The iPhone generation is putting more pressure than ever on pay-TV companies like Comcast Corp. and DirecTV, forcing the industry to rethink how to woo young people who prefer their entertainment cheap and online. 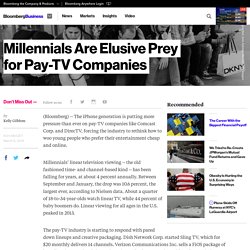 Millennials’ linear television viewing -- the old fashioned time- and channel-based kind -- has been falling for years, at about 4 percent annually. Between September and January, the drop was 10.6 percent, the largest ever, according to Nielsen data. About a quarter of 18-to-34-year-olds watch linear TV, while 44 percent of baby boomers do. Linear viewing for all ages in the U.S. peaked in 2013. The pay-TV industry is starting to respond with pared down lineups and creative packaging. Venture Capital Should Fuel Your Company, Not Your Ego: 6 Critical Lessons From The Fall Of Fab.com.

25 Disruptive Technology Trends for 2015 - 2016. With every new year comes a landslide of predictions and trends to guide us into the new year. 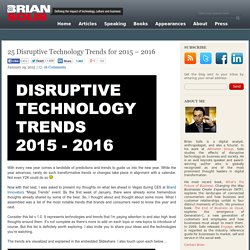 While the year advances, rarely do such transformative trends or changes take place in alignment with a calendar. Not even Y2K could do so Now with that said, I was asked to present my thoughts on what lies ahead in Vegas during CES at Brand Innovators “Mega Trends” event. By the first week of January, there were already some tremendous thoughts already shared by some of the best. How Facebook is trying to siphon off TV ad spend. Facebook has been working hard to convince marketers to shift part of their TV ad budget to the social network. 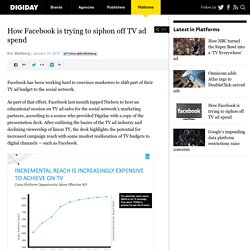 As part of that effort, Facebook last month tapped Nielsen to host an educational session on TV ad sales for the social network’s marketing partners, according to a source who provided Digiday with a copy of the presentation deck. After outlining the basics of the TV ad industry and declining viewership of linear TV, the deck highlights the potential for increased campaign reach with some modest reallocation of TV budgets to digital channels — such as Facebook. The deck also cites an August 2012 case study of an $18 million national TV investment which found that a reallocation of between 0.7 to 5.0 percent of the total television budget to “a representative mix of online sites” boosted a campaign’s total reach while reducing its mixed CPM rate.

“This is classic Facebook. Facebook has been chasing TV dollars for years. Trendspotting in the New Media Landscape — Shelly Palmer. New, social, mobile, traditional, print, digital – pick a “media” type and you can make a strong case that no industry is more in flux. 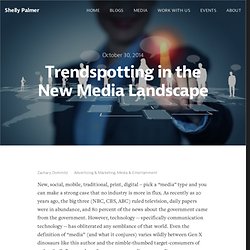 As recently as 20 years ago, the big three (NBC, CBS, ABC) ruled television, daily papers were in abundance, and 80 percent of the news about the government came from the government. Never say never: why TV networks are suddenly ready to unbundle. I got a lot of flack when I suggested in May that a network like AMC may be in a good position to unbundle from cable, and charge consumers for a Netflix-style service that would be available to anyone, even cord cutters. 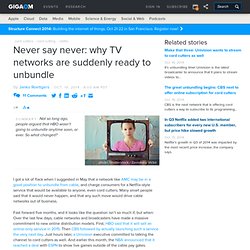 Cable Companies Have More Broadband Than TV Customers. The top U.S. cable firms still have millions of pay TV customers, but for the first time this quarter, the top cable companies had more broadband customers than cable TV subscribers. For Its New Shows, Amazon Adds Art to Its Data. The Devastating Collapse of the Music Industry in One Chart - Rocco Riffs. By: Rocco Pendola Follow | 06/27/14 - 11:00 AM EDT NEW YORK (TheStreet) -- Get a load of this visual, courtesy of the Record Industry Association of America (RIAA), via Digital Music News: That's a breakdown of total music industry revenues. R.R. Donnelley Shows That Not All Innovation Comes From Startups.

Less than a week later, during the 2014 MTV Movie Awards and AMC’s Season 7 premiere of Mad Men, the campaign made its debut on TV. YouTube beauty and fashion gurus Michelle Phan and Bethany Mota and cute and kitschy chef extraordinaire Rosanna Pansino each appeared in her own dedicated 30-second spot during the commercial breaks of the major cable television events. Amazon to unveil smartphone in time for winter holidays - WSJ. SAN FRANCISCO Sun Apr 13, 2014 9:18am IST SAN FRANCISCO (Reuters) - Amazon.com Inc (AMZN.O) is preparing to launch its long-rumored smartphone in the second half of the year, the Wall Street Journal reported on Friday, citing people briefed on the company's plans. The Internet retailer would jump into a crowded market dominated by Apple Inc (AAPL.O) and Samsung Electronics Co Ltd (005930.KS). Google Says Digital Activity Impacts Television Viewing. Lionsgate Forges Alliance With RocketJump Studios. Magazines Coordinate Their Content in Version of TV’s Crossover Episodes.

Disney Buys Maker Studios In Deal Worth At Least $500 Million. Ready for Marissa’s Closeup? Yahoo Is Considering Creating Its Own YouTube (And Poaching YouTube Stars). What will social media's giants look like in 5 or 10 years? Disney Buys Maker Studios, Video Supplier for YouTube. Facebook to Buy Virtual Reality Firm Oculus for $2 Billion. Sony and Microsoft Are in New Kind of Break-Neck Race. (1) Facebook Acquires WhatsApp for $19B (February 2014): Why did Facebook acquire WhatsApp.

Tumblr signs exclusive advertising deal with Viacom for the upfront season. Viacom, Google Bury the Hatchet Over YouTube. 'Veronica Mars' & Kickstarter: Is this the future of movie financing? Cross-platform media planning, time spent using various platforms. Why Media Companies Are Struggling (And How Inbound Can Help)