“Equality of rights is another chimera, praiseworthy when considered in the abstract and ridiculous from the standpoint of the means employed to introduce it in civilisation. 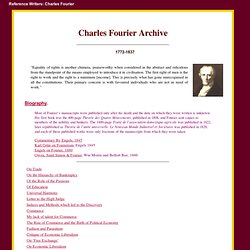 The first right of men is the right to work and the right to a minimum [income]. This is precisely what has gone unrecognised in all the constitutions. Their primary concern is with favoured individuals who are not in need of work.” Biography. Most of Fourier’s mansucripts were published only after his death and the date on which they were written is unknown. Commentary By Engels, 1845Karl Grün on Fourierism, Engels 1845Engels on Fourier, 1880Owen, Saint Simon & Fourier, Wm Morris and Belfort Bax, 1886 Notes. Letters from an Inhabitant of Geneva to His Contemporaries. Claude-Henri Saint-Simon (1803) Source: Letters from an Inhabitant of Geneva to His Contemporaries, (1803). 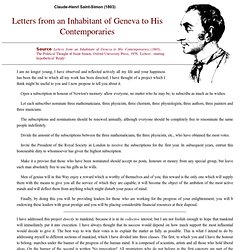 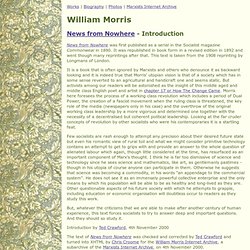 It was republished in book form in a revised edition in 1892 and went though many reprintings after that. This text is taken from the 1908 reprinting by Longmans of London. It is a book that is often ignored by Marxists and others who denounce it as backward looking and it is indeed true that Morris' utopian vision is that of a society which has in some sense reverted to an agricultural and handicraft one and seems static. But activists among our readers will be astonished as the insight of this middle aged and middle class English poet and artist in chapter 17 or How The Change Came. But, whatever the criticisms that we are able to make after another century of human experience, this text forces socialists to try to answer deep and important questions. Introduction by Ted Crawford, 4th November 2000. 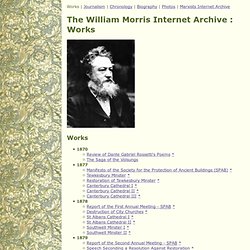 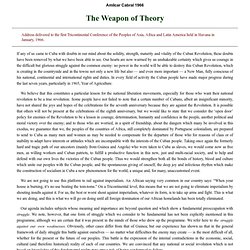 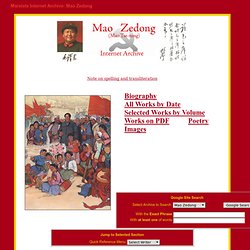 “Mao Zedong”) for Chinese names and words. However, in the case of older transcriptions from publications that predominantly use the Wade-Giles transliteration (i.e. “Mao Tse-tung”), MIA has not converted these documents and they are presented here in their original form. Kasama Project. The rise of Maoists in Nepali politics: from ‘people’s war’ to democratic politics. Authors: Ramesh Sunam and Keshab Goutam, ANU Since its formation in 1994, the United Communist Party of Nepal (Maoists) has gone through a number of radical transformations, shifting from a guerrilla warfare unit to a key democratising force within Nepali politics. 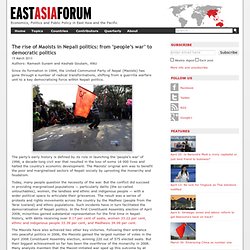 The party’s early history is defined by its role in launching the ‘people’s war’ of 1996, a decade-long civil war that resulted in the loss of some 16 000 lives and halted the country’s economic development. The Maoists’ original aim was to benefit the poor and marginalised sectors of Nepali society by uprooting the monarchy and feudalism. Today, many people question the necessity of the war. But the conflict did succeed in providing marginalised populations — particularly dalits (the so-called untouchables), women, the landless and ethnic and indigenous people — with a wider political space to articulate their grievances. The Maoists have also achieved two other key victories. CPI(Maoist) Documents, Statements and Press Releases. Naxalite–Maoist insurgency. The armed wing of the Naxalite–Maoists is called the PLGA (Peoples Liberation Guerrilla Army) and is estimated to have between 6,500 and 9,500 cadres, mostly armed with small arms.[18] The Naxalites control territory throughout Bihar, Jharkand and Andhra Pradesh states[18] and claim to be supported by the poorest of the rural population, especially the Adivasis.[19] The Naxalites have frequently targeted tribal, police and government workers in what they say is a fight for improved land rights and more jobs for neglected agricultural labourers and the poor.[20] The Naxalites claim that they are following a strategy of rural rebellion similar to a protracted people's war against the government.[21] 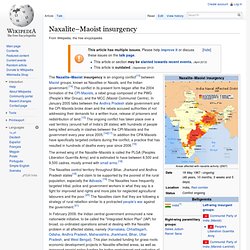 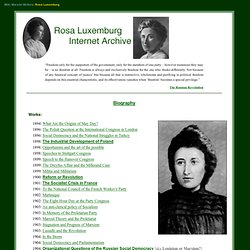 Freedom is always and exclusively freedom for the one who thinks differently. Not because of any fanatical concept of ‘justice’ but because all that is instructive, wholesome and purifying in political freedom depends on this essential characteristic, and its effectiveness vanishes when ‘freedom’ becomes a special privilege.” Clara Zetkin Internet Archive. Only in Conjunction With the Proletarian Woman Will Socialism Be Victorious, October 1896 The Workers’ International Festival, May 1899 May Greetings from Stuttgart, May 1900 Social-Democracy & Woman Suffrage, 1906 For Adult Suffrage, May 1909 German Socialist Women’s Movement, October 1909 A Greeting from Abroad, May 1913 August Bebel Obituary, August 1913. 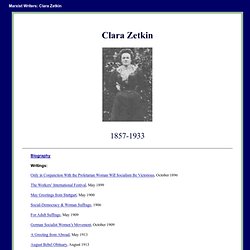 Franz Mehring Internet Archive. Biography: Originally a liberal journalist, Mehring joined the German Social Democratic Party (SPD) in the early 1890s. He rapidly became acknowledged as an important theoretician. In the course of time he moved to the left and became associated with the current around Rosa Luxemburg. With the outbreak of World War I he was, despite his advanced years, a prominent member of the revolutionary opposition to the war along with Rosa Luxemburg, Karl Liebknecht and Clara Zetkin. Leon Trotsky. Isaac Deutscher Archive. Biography Trotsky on Stalin, July 1948 Marx and Russia, November 1948 Soviet Trade Unions: Their Place in Soviet Labour Policy, 1950 Two Revolutions, 1950 The Ex-Communist's Conscience, 1950 A Useful Bogeyman, May 1950.

Even as a scientific discipline it offers nothing to the bourgeoisie. And yet, as an alternative to the discredited bourgeois social theory, it may serve the latter by providing it with some ideas useful for its rejuvenation.” Marxism: Yesterday, Today, and Tomorrow Biography. Women and Marxism Authors-Pankhurst. Left-Wing Communism Subject Archive. Left-Wing, Anti-Bolshevik and Council Communism Index to the works of “Left Communists” (a.k.a. Herman Gorter Archive. Biography Works. Jacques Camatte archive. Ralph Miliband. Ellen Meiksins Wood. David Harvey. Robert Brenner. The Jean-Paul Sartre Internet Archive. “What do we mean by saying that existence precedes essence? We mean that man first of all exists, encounters himself, surges up in the world – and defines himself afterwards. If man as the existentialist sees him is not definable, it is because to begin with he is nothing.