McLuhanResources. Philosophers, Culture Critics, and Theorists. McLuhan. Video clips. Anniversary tributes. Winnipeg virtually ignores Marshall McLuhan on centenary of his birth. Was the seed of "the medium is the message" sowed in a classroom at Gladstone School during the First World War? 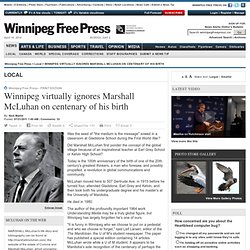 Did Marshall McLuhan first ponder the concept of the global village because of an inspirational teacher at Earl Grey School or Kelvin High School? Today is the 100th anniversary of the birth of one of the 20th century's greatest thinkers, a man who foresaw, and possibly propelled, a revolution in global communications and community. McLuhan moved here to 507 Gertrude Ave. in 1915 before he turned four, attended Gladstone, Earl Grey and Kelvin, and then took both his undergraduate degree and his master's at the University of Manitoba. He died in 1980. MMXI – Celebrating 100 years of McLuhan – Marshall McLuhan.