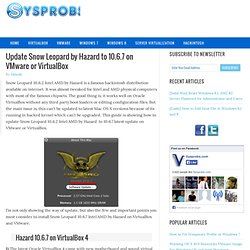 It was almost tweaked for Intel and AMD physical computers with most of the famous chipsets. The good thing is, it works well on Oracle VirtualBox without any third party boot loaders or editing configuration files. But the main issue is, this can’t be updated to latest Mac OS X versions because of its running in hacked kernel which can’t be upgraded. This guide is showing how to update Snow Leopard 10.6.2 Intel AMD by Hazard to 10.6.7 latest update on VMware or VirtualBox. I’m not only showing the way of update, but also the few and important points you must consider to install Snow Leopard 10.6.7 Intel AMD by Hazard on VirtualBox and VMware. Hazard 10.6.7 on VirtualBox 4 1) The latest Oracle VirtualBox 4 came with new motherboard and sound virtual chipsets. Make sure the following chipsets are set for virtual machine before start the hazard installation.

How to Run Mac OS X in VirtualBox on Windows.

I may wish to revisit this project. – williamellerbe

OSX in Virtual Box. How to create a Hackintoshed Virtualbox What you’ll need. 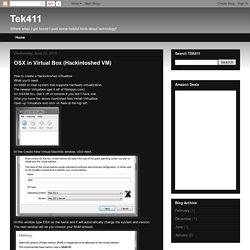 An AMD or Intel system that supports hardware virtualization. The newest Virtualbox (get it off of filehippo.com). An OSX86 iso, Get it off of torrents if you don’t have one. After you have the above mentioned files install Virtualbox. Open up Virtualbox and click on New at the top left. At the Create New Virtual Machine window, click Next. At this window type OSX as the name and it will automatically change the system and version. If you can spare it crank it up as far as you can go but 1024MB should be sufficient. This is where you’ll make your hard disk. 20GB should be enough so what it comes down to is dynamic or static.

How to install Mac OS X Snow Leopard in VirtualBox (Windows or Linux host) Published on 14th June 2010Updated on 1th May 2011 What you will need An Intel CPU with VT-x (almost all modern Intel processors have this, Core2Duo, Quad Core, etc). 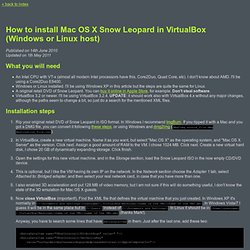 I don't know about AMD. I'll be using a Core2Duo E8400.Windows or Linux installed. I'll be using Windows XP in this article but the steps are quite the same for Linux.A original retail DVD of Snow Leopard. Installation steps Rip your original retail DVD of Snow Leopard in ISO format. And that's it! But there is no sound! In the default retail installation in VirtualBox there is no sound. Resolution is fixed to 1024x768 Just like before, power down your VM and close VirtualBox. Where N is a digit from 0 to 4, referring to 640x480, 800x600, 1024x768, 1280x1024, 1440x900 resolutions respectively. CPU usage is always 100% even when idle. Snow Leopard 10.6.1-10.6.2 Intel AMD made by Hazard. Snow Leopard 10.6.1-10.6.2 Intel AMD made by Hazard Type: Applications > Mac Files: Size: 3.66 GiB (3927819583 Bytes) Tag(s): OSx86 Snowleopard Hackintosh Uploaded: By: Seeders: Leechers: Comments Info Hash: (Problems with magnets links are fixed by upgrading your torrent client!) 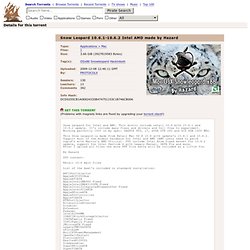 We'll also describe some of the basic issues you may encounter along the way. What You Will Need. How to Run Windows, Mac, and Linux Side by Side and Pain-Free with VirtualBox.