Philosophy_in_the_Bedroom. The Crimes of Love by Donatien-Alphonse-François de Sade - Reviews, Discussion, Bookclubs, Lists. L'homme qui aimait les femmes (1977. Emotional Consumption: Mapping Love and Masochism in an Exotic Dance Club. Dancing%20as%20Seduction%204. LOVE IN KIERKEGAARD'S <i>SYMPOSIA</i></I> Lectures on Kierkegaard's Fear and Trembling (James Mensch) The “evidence” for such things is only apparent only after one has developed the “eye” of the soul—that is, the appropriate character.Is faith like this? 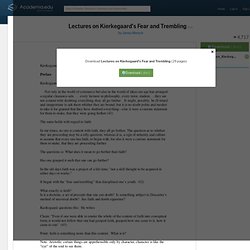 What do you think? Kierkegaard, D. Anthony Storm's Commentary on - Works Of Love. Works of Love: Some Christian Deliberations in the Form of Discourses Kjerlighedens Gjerninger. 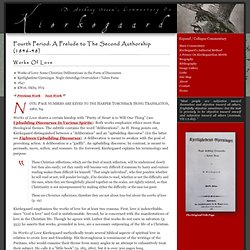 Nogle christelige Overveielser i Talers Form 1847 KW16, SKS9, SV9 Note: Page numbers are keyed to the Harper Torchback Hong Translation, 1962, 64. Works of Love shares a certain kinship with "Purity of Heart is to Will One Thing" (see Upbuilding Discourses In Various Spirits). Both works emphasize ethics more than theological themes. The subtitle contains the word "deliberations". These Christian reflections, which are the fruit of much reflection, will be understood slowly but then also easily; yet they surely will become very difficult if someone by hasty and curious reading makes them difficult for himself. Kierkegaard emphasizes the works of love for at least two reasons. Browse Inside Works of Love by Soren Kierkegaard. The Rigor of Love. The Stone is a forum for contemporary philosophers and other thinkers on issues both timely and timeless. 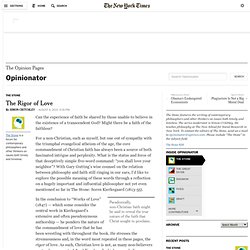 The Role of Love in the Thought of Kant and Kierkegaard. Introduction In his work, Kant and Kierkegaard: The Hidden Debt, Ronald Green has shown how Kant's analysis of the existence of evil in Religion Within the Bounds of Reason Alone influenced Kierkegaard's thought, an influence that he thinks Kierkegaard tried to hide. (1) According to Green, it was Kant who first explored the role of anxiety (Angst) in our experience of ethical guilt. 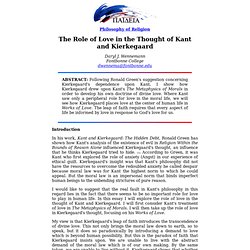 Kierkegaard's insight was that Kant's philosophy did not have the resources to overcome the redoubled anxiety he called despair because moral law was for Kant the highest norm to which he could appeal. But the moral law is an impersonal norm that binds imperfect human beings to the unbending strictures of pure reason. I would like to suggest that the real fault in Kant's philosophy in this regard lies in the fact that there seems to be no important role for love to play in human life. 073.%20Making%20a%20leap%20into%20real-love. Love and Freedom. In the most general sense, to have a philosophy is to have a view of reality or the cosmos and to have values. 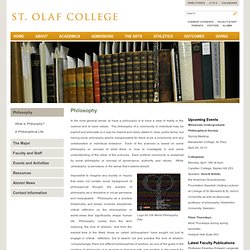 The philosophy of a community or individual may be explicit and articulate or it may be implicit and rarely stated in clear, public terms, but having some philosophy seems indispensable for there to be a community and any collaborative or individual endeavor. Each of the sciences is based on some philosophy or concept of what there is, how to investigate it, and some understanding of the value of the sciences. Each political community is sustained by some philosophy or concept of governance, authority, and values. While ‘philosophy’ is pervasive, in the sense that it seems almost Logo for UN World Philosophy Day “Faced with the complexity of today’s world, philosophical reflection is above all a call to humility, to take a step back and engage in reasoned dialogue, to build together the solutions to challenges that are beyond our control.

Click here to see St. Holland Hall, St. 5Sartre. Sartre on Love. According to Sartre, in his philosophical work Being and Nothingness, one of the most important projects of a for-itself, a human consciousness, is to found its own being, to become, in its own way, an in-itself, like an object one perceives in all its "solidity. 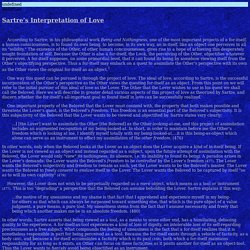 " The existence of the Other, of other human conciousnesses, gives rise to a hope of achieving this desperately sought foundation of self. Because the Other is also a for-itself, the Look, the perceiving of the Other, objectifies whatever it perceives. A for-itself supposes, on some primordial level, that it can found its being by somehow viewing itself from the Other’s objectifying perspective. Thus a for-itself may embark on a quest to assimilate the Other’s perspective with its own as the Other views the original for-itself as an object.1 One way this quest can be pursued is through the project of love. However, the Lover does not wish to be perpetually regarded as a mere object, which means as a tool or instrument (477). Jean-Paul Sartre and the Possibility of Authentic Love...by Martine Heinke-Berenpas, Kritikos V.8, March-April-May 2011.

An international and interdisciplinary journal of postmodern cultural sound, text and image Volume 8, March-April-May 2011, ISSN 1552-5112 Get the <a href=" on Facebook</a> widget and many other <a href=" free widgets</a> at <a href=" Not seeing a widget? 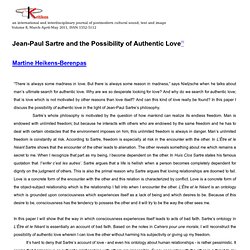 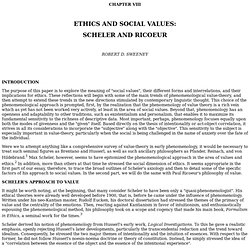 These reflections will begin with some of the main trends of phenomenological value-theory, and then attempt to extend these trends in the new directions stimulated by contemporary linguistic thought. This choice of the phenomenological approach is prompted, first, by the realization that the phenomenology of value theory is a rich vein which as yet has not been worked very actively, at least in the area of social values.

Beyond that, phenomenology has an openness and adaptability to other traditions, such as existentialism and personalism, that enables it to maximize its fundamental sensitivity to the richness of descriptive data. Most important, perhaps, phenomenology focuses equally upon both the modes of givenness and the "given" itself. Patterns of Intersubjective Recognition: Love, Rights, and Solidarity by Axel Honneth 1995. Axel Honneth 1995. 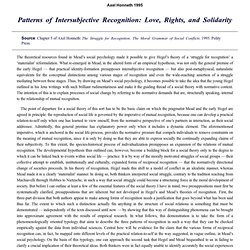 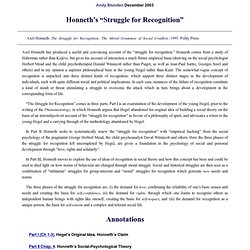 The Moral Grammar of Social Conflicts. 1995. Polity Press. Axel Honneth has produced a useful and convincing account of the “struggle for recognition.” “The Struggle for Recognition” comes in three parts. In Part II Honneth seeks to systematically renew the “struggle for recognition” with “empirical backing” from the social psychology of the pragmatist George Herbert Mead, the child psychoanalyst David Winnicott and others. All You Need is Love: Hegel, Love, and Community (Jacob Held)

Love and law: Hegel's critique of morality. Hegel: Social and Political Thought  Georg Wilhelm Friedrich Hegel (1770-1831) is one of the greatest systematic thinkers in the history of Western philosophy. In addition to epitomizing German idealist philosophy, Hegel boldly claimed that his own system of philosophy represented an historical culmination of all previous philosophical thought. Šķiršanās un konfliktu teorija.

Making Sense of Abstract Theories Sociological theories are the core and underlying strength of the discipline. They guide researchers in their studies. They also guide practitioners in their intervention strategies. And they will provide you with a basic understanding of how to see the larger social picture in your own personal life. A Theory is a set of interrelated concepts used to describe, explain, and predict how society and its parts are related to each other. Friendship. First published Tue May 17, 2005; substantive revision Fri Jun 21, 2013 Friendship, as understood here, is a distinctively personal relationship that is grounded in a concern on the part of each friend for the welfare of the other, for the other's sake, and that involves some degree of intimacy. As such, friendship is undoubtedly central to our lives, in part because the special concern we have for our friends must have a place within a broader set of concerns, including moral concerns, and in part because our friends can help shape who we are as persons.

Michel Foucault (Friendship as a Way of Life) - Keywords. From Keywords. The Social Construction of Love. Heteroseksualitāte un vara. Tang-Wong-Cheng-2002-Social-Construction-of-Women-as-Legitimate-Victims. Seksualitātes sociālā konstrukcija. Mīlestība kā sociāla konstrukcija (pārskats) Homoseksualitātes sociāla konstrukcija. Introductory Note FOUCAULT'S IDEA that even the deepest-lying sexual categories are social constructs has surely been one of the most powerful developments on the intellectual horizon in recent decades. It gives a path of explanation for much that was inexplicable; it liberates us from some of our own most mysterious values; it allows us to see things in other societies and ages that were simply overlooked before.

Foucault%20And%20Love. Crazy Love. Why do fools fall in love? And when we do fall, why do our faculties of reason--and decency and self-respect and even right and wrong--sometimes not come along? For that matter, why would anyone reciprocate the love of a partner who has come so romantically unhinged? The thought of a loved one can turn our wits upside down, ratchet up our heart rate, impel us to slay dragons and write corny songs.

Intimitātes sociālā konstrukcija. Love: The Legacy of Cain by Leopold von Sacher-Masoch - Reviews, Discussion, Bookclubs, Lists. 'Venus in Furs' Review. Not many writers have the distinction-or the notoriety-of having a psycho-sexual term named after them. Humboldt-Universität zu Berlin. Leopold Ritter von Sacher-Masoch (1836-1895) was an Austrian novelist, from whose name the term "masochism" was derived by the psychiatrist Richard von Krafft-Ebing. 'Venus in Furs' Review. Deleuze - From Sacher-Masoch to Masochism.