5 Tips For Using Distortion. Distortion is one of the most popular and widely used effects in all music production.

You would be hard pressed to find a song that doesn’t use at least some distortion. Many producers seem to think they can just grab their favorite distortion plugin, throw it on one of their tracks, dial in the dry wet knob, and they’re good to go. But the best producers know that there is a world of creativity to be explored with these dynamic processors and getting creative opens up a completely new sonic palette. Here are 5 unique ways to get the most out of your distortion units. 1. For some reason, producers often overlook the dramatic effects which can be achieved by automating their distortion.

Here are few ways to use distortion automation: Need a list of FREE high-quality distortion plugins for your next song? 2. Adding distortion units to your return/send chains can be a great way add tonal interest to your mix. 3. Circuit Mono Station by Novation Now Available. Tips to Build Your Own Sound Library by Dom McLennon. The producer’s sound library is a sacred place. 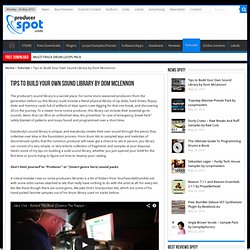 For some more seasoned producers from the generation before us; this library could include a literal physical library of zip disks, hard drives, floppy disks and memory cards full of artifacts of days spent crate digging for that one break, and discovering 20 on the journey. To a newer more novice producer, this library can include their essential go-to sounds. Items that can fill in an unfinished idea, the proverbial “in case of emergency, break here” safety blanket of patterns and loops found and programmed over a short time. Everybody’s sound library is unique, and everybody creates their own sound through the pieces they collective over time in the foundation process. From drum kits to sampled keys and melodies of discontinued synths that the common producer will never get a chance to see in person, you library can consist of a very simple, or very eclectic collection of fragments and samples at your disposal. 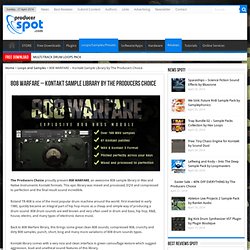 This epic library was mixed and processed, EQ’d and compressed to perfection and the final result sound incredible. Roland TR-808 is one of the most popular drum machine around the world. First invented in early 1980, quickly became an integral part of hip hop music as a cheap and simple way of producing a drum sound. 808 drum sounds are well known and very often used in drum and bass, hip hop, R&B, house, electro, and many types of electronic dance music. Back to 808 Warfare library, this brings some great clean 808 sounds, compressed 808, crunchy and dirty 808 samples, punch, short, long and many more variations of 808 drum sounds types. Kontakt library comes with a very nice and clean interface in green camouflage texture which suggest aggression, loud and unethical sound features of this library. In total this library includes 41 Kontakt Patches. Quality - 9.8. Sampling - 800 Chopped Samples. Price: $22.50 <div style="width:163px;padding:0px;"><a style="text-decoration: none; color: #000000;font-size: 6px;" href=" for Sampling Product Page</a><br /><a target="tradebitWindow" href=" src=" style="border:none;"></a></div> Sampling – 800 Cohopped Samples is a collection of old music samples that can be used in making hip hop beats exactly how the first music producers made. 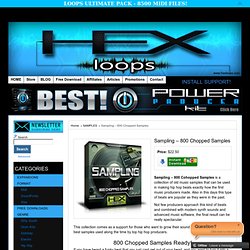 Also in this days this type of beats are popular as they were in the past. Not few producers approach this kind of beats and combined with modern synth sounds and advanced music software, the final result can be really spectacular. This collection comes as a support for those who want to grow their sound arsenal with some of the best samples used along the time by top hip hop producers. If you have heard a funky beat that you just cant get out of your head, and you want to turn it into a new song, sampling beats is a fun and easy project you can do on your home computer. 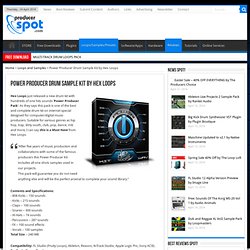 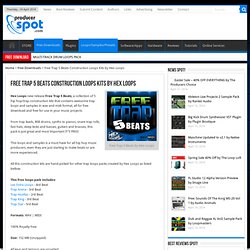 From trap leads, 808 drums, synths to pianos, snare trap rolls, fast hats, deep kicks and basses, guitars and brasses, this pack is just great and most important IT’S FREE! This loops and samples is a must have for all hip hop music producers, even they are just starting to make beats or are more experienced. All this construction kits are hand-picked for other trap loops packs created by Hex Loops as listed bellow. 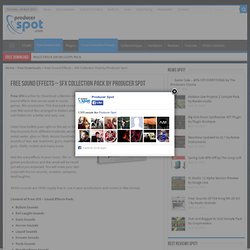 This free pack contains over 800 sound files arranged in folders and sub-folders for a better and easy use. Listen how bullets pass right on the ear or how they bounces from different materials, wood, metal, water, glass or flesh. Deadmau5 XFER Sample Pack by Xfer Records at Loopmasters. Loopmasters presents Deadmau5 XFER, a new collection of loops and samples created by a new label, Xfer Records. 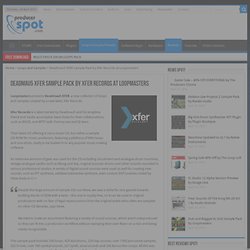 Xfer Records is a label started by Deadmau5 and his longtime friend and studio accomplice Steve Duda for their collaborations, such as BSOD, and WTF? With Tommy Lee and DJ Aero. Their latest CD offering is not a music CD, but rather a sample CD-ROM for music producers, featuring a plethora of WAV loops and one-shots, ready to be loaded in to any popular music-making software. An extensive amount of gear was used for the CD-including circuit-bent and analogue drum machines, vintage analogue synths such as Moog and Arp, original acoustic drums and other sounds recorded in various professional studios. A variety of digital sound sources were used as well for creating new sounds, such as FFT synthesis, additive/subtractive synthesis, even custom DSP routines coded by Steve Duda in C++. Priced at £ 59.95, this sample pack is a must have for any electronic producer from this days. Audio Jack - Retrospective House Sample Pack by Loopmasters. 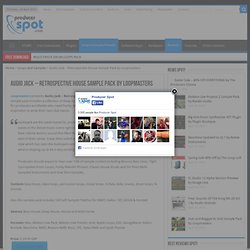 This sample pack includes a collection of Deep Grooving House samples for producers worldwide who need Funky, Melodic Deep House inspiration to write their next club classic. Audiojack are the Leeds based DJ, production duo making big waves in the dance music scene right now. Although it was their robotic techno sound that filled the dance floors at the start of their career, it was their switch to a deeper and housier style which has seen the Audiojack name rise to the top of what is shaping up to be a very exciting time for House music.Producers should expect to hear over 1GB of sample content including Bouncy Bass Lines, Tight Syncopated Drum Loops, Funky Melodic Phrases, Classic House Vocals and On Point Multi Sampled Instruments and One Shot Samples.