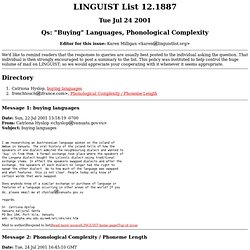 That individual is then strongly encouraged to post a summary to the list. Directory. Blog » Blog Archive » Humboldt’s parrot. There’s a story that in 1799 the German naturalist and explorer Alexander von Humboldt (1769–1859) was exploring the Orinoco and Amazon rivers and documenting the languages and cultures of the tribes he encountered there. 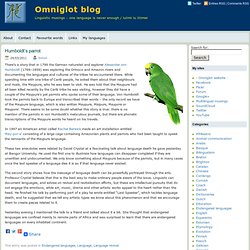 While spending time with one tribe of Carib people, he asked them about their neighbours and rivals, the Maypure, who he was keen to visit. He was told that the Maypure had all been killed recently by the Carib tribe he was visiting, however they did have a couple of the Maypure’s pet parrots who spoke some of their language. Von Humboldt took the parrots back to Europe and transcribed their words – the only record we have of the Maypure language, which is also written Maypure, Maipure, Maypore or Maypore’. Kusunda, a language like no other? Kusunda is a dying isolate language. 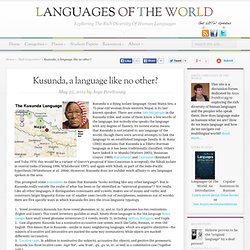 Gyani Maiya Sen, a 75-year-old woman from western Nepal, is its last known speaker. There are some 100-160 people in the Kusunda tribe, and some of them know a few words of the language, but nobody else speaks the language with any degree of fluency. Its isolate status means that Kusunda is not related to any language of the world, though there were several attempts to link the language to an established language family. B. K. This prompted some journalists to claim that Kusunda “looks nothing like any other language”. Vowel inventory. Thus, though Kusunda may be quite different from and unrelated to its neighbors, it is hardly “unlike any other language”, as journalistic reports proclaim it to be. Complexity in language. [Date Prev][Date Next][Thread Prev][Thread Next][Date Index][Thread Index] To: lojbab@access.digex.netSubject: Complexity in languageFrom: j.guy@trl.oz.au (Jacques Guy)Date: Thu, 15 Dec 1994 00:27:26 +0100Comment: Issues related to constructed languagesReply-To: conlang@diku.dkSender: conlang@diku.dkVersion: 5.5 -- Copyright (c) 1991/92, Anastasios Kotsikonas Acting under duress (John Cowan urges me to repost this here), I repeat here what I posted not very long ago on sci.lang about the old saw, found in the FAQ, that all languages are equally complex. 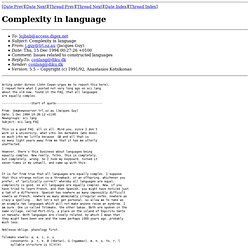 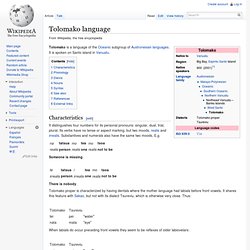 It is spoken on Santo island in Vanuatu. Characteristics[edit] It distinguishes four numbers for its personal pronouns: singular, dual, trial, plural. Its verbs have no tense or aspect marking, but two moods, realis and irrealis. Hypothesis: all languages are equally complex - sci.lang. Seen on alt.language.artificial. The Language Database - Voiauai. Hmong Dictionary - Dictionary Hmong. Pama–Nyungan languages. The Pama–Nyungan languages are the most widespread family of Indigenous Australian languages,[2] containing perhaps 300 languages. 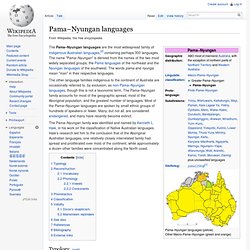 The name "Pama–Nyungan" is derived from the names of the two most widely separated groups, the Pama languages of the northeast and the Nyungan languages of the southwest. The words pama and nyunga mean "man" in their respective languages. The other language families indigenous to the continent of Australia are occasionally referred to, by exclusion, as non-Pama–Nyungan languages, though this is not a taxonomic term. Palawa kani. Palawa kani is a constructed language, a project to create a generic language resembling the extinct languages once spoken by Aboriginal Tasmanians (Palawa). 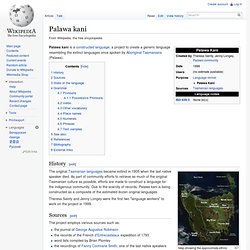 History[edit] Map showing the approximate ethnic divisions in pre-European Tasmania. The original Tasmanian languages became extinct in 1905 when the last native speaker died. As part of community efforts to retrieve as much of the original Tasmanian culture as possible, efforts are made to construct a language for the indigenous community. Due to the scarcity of records, Palawa kani is being constructed as a composite of the estimated dozen original languages. A PEOPLE whose material culture is as simple as that of the Nuer are highly dependent on their environment. Taa. Taa /ˈtɑː/, also known as ǃXoon (! 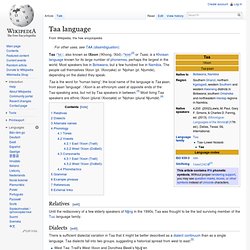 Khong, ! Xóõ) /ˈkoʊ/[2] or Tsasi, is a Khoisan language known for its large number of phonemes, perhaps the largest in the world. Most speakers live in Botswana, but a few hundred live in Namibia.