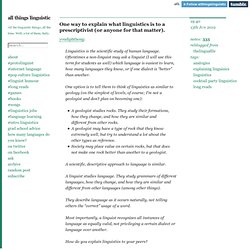 Oftentimes a non-linguist may ask a linguist (I will use this term for students as well) which language is easiest to learn, how many languages they know, or if one dialect is “better” than another.One option is to tell them to think of linguistics as similar to geology (on the simplest of levels, of course; I’m not a geologist and don’t plan on becoming one):A geologist studies rocks. They study their formations, how they change, and how they are similar and different from other rocks.A geologist may have a type of rock that they know extremely well, but try to understand a lot about the other types as reference.Society may place value on certain rocks, but that does not make one rock better than another to a geologist.A scientific, descriptive approach to language is similar.A linguist studies language. 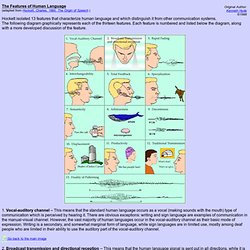 The Origin of Speech.) Hockett isolated 13 features that characterize human language and which distinguish it from other communication systems. The following diagram graphically represents each of the thirteen features. Each feature is numbered and listed below the diagram, along with a more developed discussion of the feature. 1. Go back to the main image 2. 3. 4. How_to_Learn_Martian_1955. Linguistics: Say what? Debates: Language: Guest. People Hate Linguistics « The Compulsive Explainer. And the depth of their hatred is amazing. 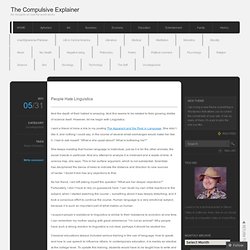 And this seems to be related to their growing dislike of science itself. However, let me begin with Linguistics. I sent a friend of mine a link to my posting The Apparent and the Real in Language. She didn’t like it, and nothing I could say, in the course of several email exchanges would make her like it. I had to ask myself: “What is she upset about? She keeps insisting that human language is instinctual, just as it is for the other animals, the social insects in particular. As her friend, I am left asking myself the question “What are her deeper objections?” I suspect people’s resistance to linguistics is similar to their resistance to evolution at one time. Classical educations always included serious training in the use of language: how to speak and how to use speech to influence others. Here, I think, is the nub of the problem: people are no longer encouraged to understand themselves. 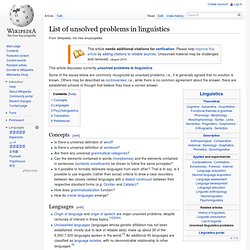 Some of the issues below are commonly recognized as unsolved problems; i.e., it is generally agreed that no solution is known. Others may be described as controversies; i.e., while there is no common agreement about the answer, there are established schools of thought that believe they have a correct answer. Concepts[edit] Languages[edit] Origin of language and origin of speech are major unsolved problems, despite centuries of interest in these topics.[1][2][3][4]Unclassified languages (languages whose genetic affiliation has not been established, mostly due to lack of reliable data) make up about 38 of the 6,000-7,000 languages spoken in the world.[5] An additional 45 languages are classified as language isolates, with no demonstrable relationship to other languages.[5]Undeciphered writing systems Psycholinguistics[edit] Translation[edit] What should the translator adhere to: fidelity or transparency? References[edit] Led on Line - Snippets.