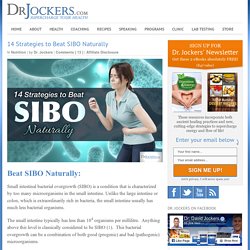 Unlike the large intestine or colon, which is extraordinarily rich in bacteria, the small intestine usually has much less bacterial organisms. SIBO damages the intestinal lining and creates a state of mild-severe leaky gut syndrome and resulting food allergies, sensitivities and chronic inflammatory processes (2). It is imperative to get proper help through good nutrition and lifestyle and the help of a functional nutrition practitioner. Small Intestinal Microbiome: The duodenum and proximal jejunum normally contain small numbers of bacteria, usually lactobacilli and enterococci, gram-positive aerobes or facultative anaerobes. The distal ileum is a transition zone between sparse populations of aerobic bacteria of the proximal small intestine and very dense populations of anaerobic micro-organisms in the large bowel. 1. How to Treat SIBO: 54 Science-Backed Ways to Inhibit Biofilms Naturally (With References) - Selfhacked.

SIBO and IBS – and why you shouldn’t simply accept a diagnosis of IBS. I am frequently told by my patients who have digestive problems that they have been diagnosed with irritable bowel syndrome (IBS). 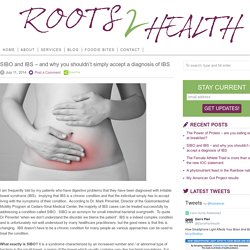 Implying that IBS is a chronic condition and that the individual simply has to accept living with the symptoms of their condition. According to Dr. Mark Pimentel, Director of the Gastrointestinal Motility Program at Cedars-Sinai Medical Center, the majority of IBS cases can be treated successfully by addressing a condition called SIBO.

SIBO is an acronym for small intestinal bacterial overgrowth. To quote Dr Pimentel “when we don’t understand the disorder we blame the patient”. What exactly is SIBO? How do we test for SIBO? How is SIBO treated? Links The US dietitian, Kate Scarlata, has useful FODMAP resources, including low FODMAP recipesMonnash University low FODMAP App My Symptoms App for tracking your diet and symptomsExcellent SIBO resources The Specific Carbohydrate Diet. Small Intestinal Bacterial Overgrowth (SIBO) Okay, I am about to get all science-y on you. 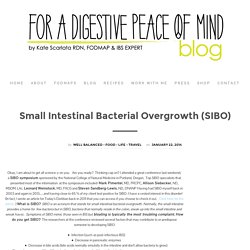 Are you ready? Thinking cap on? I attended a great conference last weekend, a SIBO symposium sponsored by the National College of Natural Medicine in Portland, Oregon. Top SIBO specialists that presented most of the information at the symposium included: Mark Pimentel, MD, FRCPC, Allison Siebecker, ND, MSOM, LAc, Leonard Weinstock, MD, FACG and Steven Sandberg-Lewis, ND, DNANP Having had SIBO myself back in 2003 and again in 2013….and having close to 65 % of my client test positive for SIBO–I have a vested interest in this disorder!

{In fact, I wrote an article for Today’s Dietitian back in 2011 that you can access if you choose to check it out. Infection (such as post-infectious IBS)Decrease in pancreatic enzymesDecrease in bile acids (bile acids normally emulsify in the intestine and don’t allow bacteria to grow).Stress-decreases motility of the intestine so bacteria can build up in the intestine.Low stomach acid Dr. Wow…right!? Migrating motor complex – Getting Healthier Now. Recently I’ve been reading about how fluoroquinolone antibiotics, like Cipro and Levaquin, poison us with fluoride. 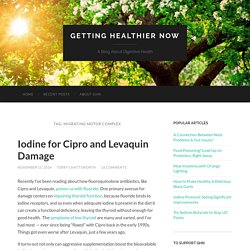 One primary avenue for damage centers on impairing thyroid function, because fluoride binds to iodine receptors, and so even when adequate iodine is present in the diet it can create a functional deficiency, leaving the thyroid without enough for good health. The symptoms of low thyroid are many and varied, and I’ve had most — ever since being “floxed” with Cipro back in the early 1990s. Things got even worse after Levaquin, just a few years ago. It turns out not only can aggressive supplementation boost the bioavailable iodine (some doctors urge caution with iodine in higher doses, others say to avoid it entirely), but iodine also has the ability to remove fluoride from the body, to free up its receptors from toxins, making them available (in my case, perhaps for the first time in 20 years) for proper thyroid function. Lufenuron was a great diagnostic tool for me. MMC and SIBO. Your digestive system eliminates waste through a process known as the migrating motor complex. 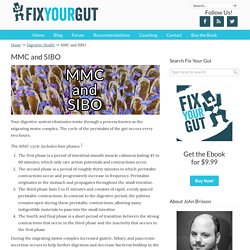 The cycle of the peristalsis of the gut occurs every two hours. The MMC cycle includes four phases: The first phase is a period of intestinal smooth muscle calmness lasting 45 to 60 minutes, which only rare action potentials and contractions occur.The second phase is a period of roughly thirty minutes in which peristaltic contractions occur and progressively increase in frequency. Peristalsis originates in the stomach and propagates throughout the small intestine.The third phase lasts 5 to 15 minutes and consists of rapid, evenly spaced peristaltic contractions. During the migrating motor complex increased gastric, biliary, and pancreatic secretion occurs to help further digestion and decrease bacterial buildup in the proximal segments of the digestive tract. As much as 70% of people afflicted with SIBO experience a disruption of MMC rhythm.