10 Awesome Places to Find Background Music for Video. Video content has exploded in popularity, and it’s no wonder. 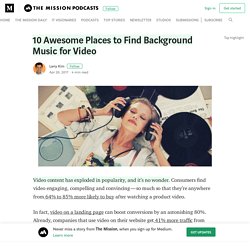 Consumers find video engaging, compelling and convincing — so much so that they’re anywhere from 64% to 85% more likely to buy after watching a product video. In fact, video on a landing page can boost conversions by an astonishing 80%. Already, companies that use video on their website get 41% more traffic from search results than those that don’t, and by next year, you can expect 74% of all web traffic to be video. Sure, every smartphone worth its salt has a decent video camera, but the highly competitive content arena today demands top quality content in all formats — including video. The remix wars: Originality in the age of digital reproduction. How Remix Culture Informs Student Writing & Creativity. Thinkstockphotos.com. 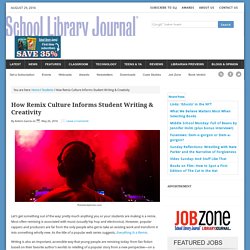 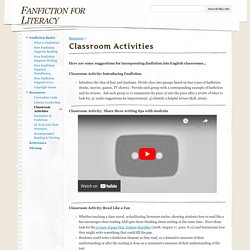 Classroom Activity: Introducing Fanfiction Introduce the idea of fans and fandoms. Divide class into groups based on four types of fanfiction (books, movies, games, TV shows). FanFiction. Wattpad - Stories You'll Love. When Harry Met Bella: Fanfiction is all the rage. But is it plagiarism? Or the perfect thing to encourage young writers? Remember when Harry Potter invited Bella Swan to Hogwarts’s big dance? 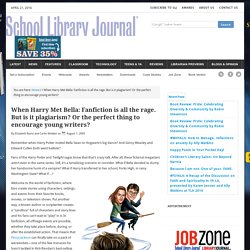 And Ginny Weasley and Edward Cullen both went ballistic? Fans of the Harry Potter and Twilight sagas know that that’s crazy talk. After all, these fictional megastars aren’t even in the same series. Fanfiction: What Educators Really Need to Know — @Peter_Gutierrez Connect the Pop. Fan Fiction Takes Flight Among Teens. Illustration by Michael Byers Many years before Harry Potter was born, his parents, Lily and James, met and fell in love at Hogwarts School of Witchcraft and Wizardry. 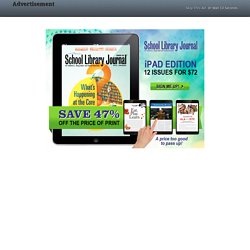 At first, Lily thought James was nothing more than an annoying show-off, but then she got to know the boy behind the bravado. Remix culture: a rights nightmare - Indepth - Catapult - ABC Online. Digital technology is blurring the boundaries of artistic ownership, writes Rebecca Martin. 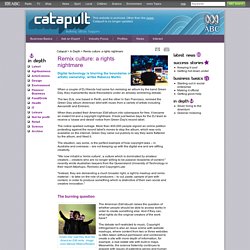 When a couple of DJ friends had some fun remixing an album by the band Green Day, they inadvertently stuck firecrackers under an already simmering debate. The two DJs, one based in Perth, and the other in San Francisco, remixed the Green Day album American Idiot with music from a variety of artists including Aerosmith and Eminem. When they posted their American Edit album into cyberspace for free, it became an instant hit and a copyright nightmare. It took just twelve days for the DJ team to receive a 'cease and desist' notice from Green Day's record label. TEDxWarwick - Doug Belshaw - The Essential Elements of Digital Literacies. Remix culture: a rights nightmare - Indepth - Catapult - ABC Online.

Apple Mac Music Video. Remixing Culture And Why The Art Of The Mash-Up Matters. Editor’s Note: Ben Murray is the editor for The Space, a digital art non-profit organization in the UK and was a former BBC digital editor. 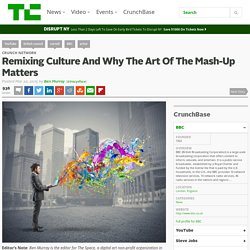 Remix Culture and Amateur Creativity: A Copyright Dilemma. June 2015 By Guilda Rostama, Consultant, WIPO Many commentators today are talking about the “age of the remix”, a practice enabled by widespread access to sophisticated computer technology whereby existing works are rearranged, combined or remixed to create a new work. 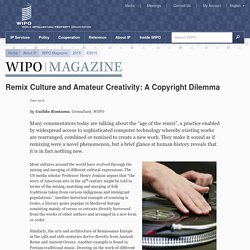 They make it sound as if remixing were a novel phenomenon, but a brief glance at human history reveals that it is in fact nothing new. Most cultures around the world have evolved through the mixing and merging of different cultural expressions. The US media scholar Professor Henry Jenkins argues that “the story of American arts in the 19th century might be told in terms of the mixing, matching and merging of folk traditions taken from various indigenous and immigrant populations.”

Similarly, the arts and architecture of Renaissance Europe in the 15th and 16th centuries derive directly from Ancient Rome and Ancient Greece. A shift in the creative landscape. Fair Use: Remix Culture, Mashups, and Copyright. In this lesson, students will focus on defining the concept, purpose, and impact of fair use in U.S. copyright law. 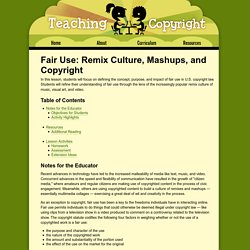 Students will refine their understanding of fair use through the lens of the increasingly popular remix culture of music, visual art, and video. Free to Mix: An educator's guide to reusing digital content. The Free to Mix guide has been written to support teachers and students to reuse digital content. 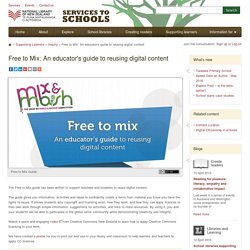 The guide gives you information, activities and ideas to confidently create a remix from material you know you have the rights to reuse. Curriculum Download — ikeepsafe.org. LESSON 1—Creativity in the Online World: Our Roles as Creators and Consumers Lesson 1 covers our roles as consumers and creators and the basic protections of copyright. It also provides a high level view of copyright’s limitations—the things it doesn’t cover, like facts and ideas, fair uses, and works in the public domain. LESSON 2—Acquiring Content Legally and Ethically Lesson 2 shows students what to do when they want new music, movies, images, even software. YouTube Copyright Center. Dr Mashup or why educators should learn to stop worrying and love the remix.

Viva La Library Remix. The New York Public Library Encourages Readers to ‘Remix’ Its Public Domain Collections. The role of a library has long been to “collect and preserve cultural records and documents of our time here on earth as a civilization,” says Ben Vershbow, director of New York Public Library’s NYPL Labs. But that’s just one part of it. The point of collecting and preserving is not to store things away under impenetrable lock and key, but to provide access to historical artifacts that inspire new knowledge and works.

The NYPL made a move Wednesday meant to facilitate this age-old goal. The library has released high-resolution images, metadata and other updates for roughly 187,000 items in its digital collections. This subset of the nearly 700,000 archival items the library has digitized to date has “no known U.S. copyright restrictions.” #remixvic. The Digital Remix Mash-Up Culture Explained. A quick cool audio-visual way to explain to other educators (or kids!) The Digital Remix Mash-Up Culture today is to show clips of these music videos. Secrets of the Remix Mashup YouTube Gen 2015. The Remix Society – Betchablog. Library of Congress Rules YouTube Remixes are Legal! Everything is a Remix (all parts)