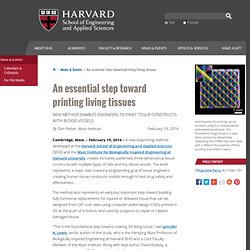 The work represents a major step toward a longstanding goal of tissue engineers: creating human tissue constructs realistic enough to test drug safety and effectiveness. The method also represents an early but important step toward building fully functional replacements for injured or diseased tissue that can be designed from CAT scan data using computer-aided design (CAD), printed in 3D at the push of a button, and used by surgeons to repair or replace damaged tissue. 3D Bioprinting of Vascularized, Heterogeneous Cell‐Laden Tissue Constructs. Bioprinting, Part 2 - The Ethical Conundrum. Bioprinting, Part 1 - The Promise and the Pitfalls Nearly 120,000 people in the United States are on the waiting list for an organ transplant that may save their lives, according to the American Transplant Foundation. 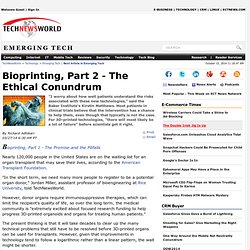 "In the short term, we need many more people to register to be a potential organ donor," Jordan Miller, assistant professor of bioengineering at Rice University, told TechNewsWorld. However, donor organs require immunosuppressive therapies, which can limit the recipient's quality of life, so over the long term, the medical community is "extremely excited about focused research funding to help progress 3D-printed organoids and organs for treating human patients.

" The present thinking is that it will take decades to clear up the many technical problems that still have to be resolved before 3D-printed organs can be used for transplants. However, given that improvements in technology tend to follow a logarithmic rather than a linear pattern, the wait might be shorter. Biology vs.

Phq164_48_dossier.pdf. Serimedis : la banque d'images de l'Inserm. Université Européenne de Bretagne. How Much Does Pharmaceutical Innovation Cost? A Look At 100 Companies. Pwc-pharma-2020-the-vision-french.pdf. PhRMA Profile 2013.pdf. 10-02-drugr-d.pdf. NME Output versus R&D Expense – Perhaps there is an explanation. A popular display of innovative productivity in the Biopharmaceutical Industry has been the plot of New Molecular Entitities (NMEs) versus Total R&D spend in the U.S., Figure 1. 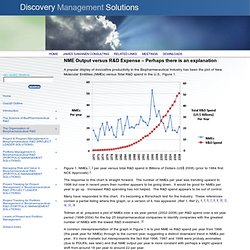 Figure 1, NMEs , per year versus total R&D spend in Billions of Dollars (US$ 2008) (prior to 1984 first NCE Approvals) The response to this chart is straight forward. The number of NMEs per year was trending upward to 1996 but now in recent years then number appears to be going down. It would be good for NMEs per year to go up. Increased R&D spending has not helped. Many have responded to this chart.

Tollman et al. prepared a plot of NMEs over a six year period (2002-2008) per R&D spend over a six year period (1998-2004) for the top 25 biopharmaceutical companies to identify companies with the greatest number of NMEs with the lowest R&D investment. The increasing distance between NMEs and Pharma Spend in Figure 1 is often referred to as the “Innovation Gap”, e.g. Number of Companies. Bioprinting is a Multi-Billion Dollar Pharma Opportunity for 3D Printing. Organovo CEO Sheds Light on its Breakthrough Bioprinting Technology and Roadmap Ahead One of the most exciting and promising applications of 3D printing is bioprinting, the ability to manufacture living human tissue and possibly organs. 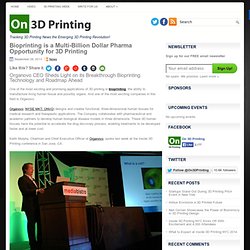 And one of the most exciting companies in this field is Organovo. Organovo (NYSE MKT: ONVO) designs and creates functional, three-dimensional human tissues for medical research and therapeutic applications. The Company collaborates with pharmaceutical and academic partners to develop human biological disease models in three dimensions. These 3D human tissues have the potential to accelerate the drug discovery process, enabling treatments to be developed faster and at lower cost.

Keith Murphy, Chairman and Chief Executive Officer of Organovo, spoke last week at the Inside 3D Printing conference in San Jose, CA. The 3D Bioprinting Revolution. By Suraj Kannan Perhaps no technology has grown as rapidly and promised so much in the last decade as 3D printing. 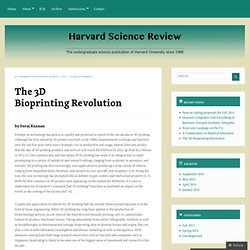 Although the first industrial 3D printer was built in the 1980s, improvements in design and function over the last five years have seen a dramatic rise in production and usage; indeed, forecasts predict that the sale of 3D printing products and services will reach $10.8 billion by 2021, up from $2.2 billion in 2012 (1). The customizable and fast nature of 3D printing has made it an integral tool in rapid prototyping in a variety of industrial and research settings, ranging from academic to aerospace and military. 3D printing has also increasingly seen application in producing a wide variety of objects, ranging from household tools, furniture, and utensils to cars, aircraft, and weaponry (2-4). 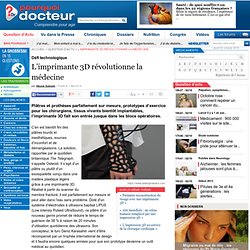 La solution, rapportée par le quotidien britannique The Telegraph, s’appelle Osteoid. Innovation à Bordeaux : la bio-impression laser. Bioprinting, Part 1: The Promise and the Pitfalls. A lire sur: By Richard Adhikari, TechNewsWorld , 03/26/14 6:26 AM PT The technical side of printing small-volume organs "may be achieved within the next two years," said Kevin Healy, chair of the department of bioengineering at the University of California at Berkeley. 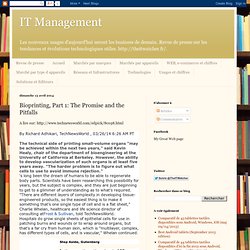 However, the ability to develop vascularization of such organs is at least five years away. "The harder problem is to figure out what cells to use to avoid immune rejection. " Lauréat NETEXPLO 2014 - Eline KUIPERS et Ingmar VAN HENGEL pour SKINPRINT (The Netherlands) How Autodesk's Project Cyborg Will Revolutionize Synthetic Biology. Software is an extremely valuable tool with countless applications. 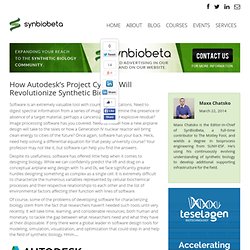 Need to digest spectral information from a series of images to determine the presence or absence of a target material, perhaps a cancerous tumor or explosive residue? Image processing software has you covered. Need to model how a new airplane design will take to the skies or how a Generation IV nuclear reactor will bring clean energy to cities of the future? Once again, software has your back. Can Autodesk and Organovo Bring Tissue Engineering to a Hospital Near You? (ADSK, ONVO) Tissue engineering has captured the imagination of mainstream media and investors alike. 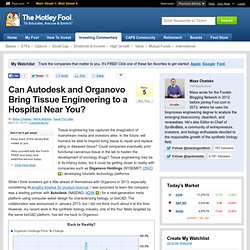 In the future, will humans be able to bioprint living tissue to repair and replace ailing or diseased tissue? Could companies eventually print functional cancerous tissue in the lab to hasten the development of oncology drugs? Tissue engineering may be in its infancy today, but it could be getting closer to reality with companies such as Organovo Holdings (NYSEMKT: ONVO ) developing futuristic technology platforms. While I think investors got a little ahead of themselves with Organovo in 2013, especially considering its lengthy timeline for product revenue, I was surprised to learn the company was a leading partner with Autodesk (NASDAQ: ADSK ) for a next-generation meta platform using computer-aided design for characterizing biology, or bioCAD. 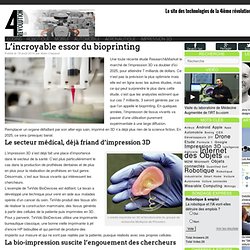 The result. TeVido BioDevices develops 3D bioprinted skin grafts for breast reconstruction. Aug. 15, 2014 New advancements in 3D printing could already improve and save lives with reproducing human cells in laboratories. While companies like Organovo and Wake Forest Institute for Regenerative Medicine are on the path to use the technology to create blood vessels, skin tissue or human organs, another company, TeVido BioDevices is working on 3D printing skin grafts for patients.

The bioprinter contains a 2D table and a Z assembly, on which the nozzles (housing the gel and aggregates) are mounted. Sir, Your Liver Is Ready: Behind the Scenes of Bioprinting. SAN DIEGO -– Say goodbye to donor lists and organ shortages. A biotech firm has created a printer that prints veins using a patients’ own cells.

The device could potentially create whole organs in the future. “Right now we’re really good at printing blood vessels,” says Ben Shepherd, senior research scientist at regenerative-medicine company Organovo. “We printed 10 this week. New Skin Printer Could Print You Some New Skin. Wake Forest's skin printer deposits cells directly on wounds to heal them faster. Healing your wounds quickly and safely may be as easy as filling an inkjet printer with your cells. Wake Forest’s Institute for Regenerative Medicine (WFIRM) and the Armed Forces Institute for Regenerative Medicine (AFIRM) have developed a skin printer that can deposit cells directly onto a wound to help it heal faster.

They recently presented the results of their latest experiments at the American College of Surgeons Clinical Congress (ACSCC) in Washington DC. Mice given topical wounds were able to heal in just three weeks when a new skin was printed onto the damaged area (compared to 5-6 with control groups). WFIRM and AFIRM also stated that the skin printer had been tested to see if it could print human cells, but that the next step forward would be experiments on pigs. Mouse wounds healed better and faster with the skin printer. Inkjet-like device 'prints' cells right over burns.

Researchers aim to 'print' human skin. Each cell type is placed in a vial, rather than in cartridges. The cells are then "printed" directly on the wound. A Myriad of Medical 3D Printing Applications on the Way. Marie Gethins May 2014 Decreasing cost and better access to 3D printing is fuelling a research explosion into using the technique for medical applications. While the technology has created impressive external cosmetic replacements such as ears and noses, research into internal devices constructed through 3D printing for hips, knees, elbows and jaws is on-going.

Perhaps even more exciting is the potential to construct products embedded with biological materials for regenerative purposes, a process known as bioprinting. Multiple applications of this process are being explored. In June 2012, researchers in Belgium used 3D printing to create a replacement titanium lower jaw. Researchers believe the same technique could be applied to hip, knee, elbow and shoulder prostheses, and even large portions of the skull. The idea is to use an implant or a conduit to facilitate the natural regeneration process.