The ability of computers to understand natural speech has been revolutionised in the last few years by the application of deep neural networks (e.g., Google Voice Search). However, generating speech with computers — a process usually referred to as speech synthesis or text-to-speech (TTS) — is still largely based on so-called concatenative TTS, where a very large database of short speech fragments are recorded from a single speaker and then recombined to form complete utterances.

This makes it difficult to modify the voice (for example switching to a different speaker, or altering the emphasis or emotion of their speech) without recording a whole new database. WaveNet changes this paradigm by directly modelling the raw waveform of the audio signal, one sample at a time. 216 "untranslatable" emotional words from non-English languages. University of East London pysch professor Tim Lomas has assembled a list of words referring to emotional states from the world's languages that have no correlate in English.

Whether or not that turns out to be true, the list is fascinating. Some favorites below, a surprising number of which are the names of well-known products, projects, or titles: * S'apprivoiser (French) (v.): lit, 'to tame', but a mutual process - both sides slowly learning to trust the other and eventually accepting each other. Pingu, the cute little British/Swiss penguin who... Pingu, the cute little British/Swiss penguin who has been a TV star since 1986, is a great example of how intonation can convey meaning. 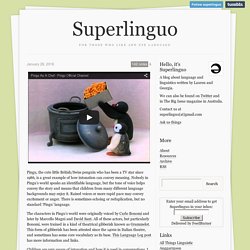 Nobody in Pingu’s world speaks an identifiable language, but the tone of voice helps convey the story and means that children from many different language backgrounds may enjoy it. Endangered Languages Project. Atlas of the World's Languages in danger. Glottolog 2.7 - Ethnologue. Talking parrot missing for 4 years found, now speaks Spanish. When Nigel vanished four years ago, he spoke with a cultivated British accent. 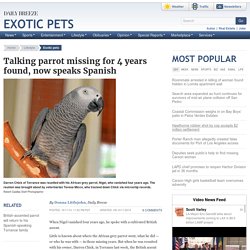 Little is known about where the African grey parrot went, what he did — or who he was with — in those missing years. But when he was reunited with his owner, Darren Chick, in Torrance last week, the British accent was gone and the bird was chattering in Spanish, often mentioning the name “Larry.” The happy reunion began to unfold after veterinarian Teresa Micco — who had been running ads for her own lost African grey parrot, Benjamin — was contacted by the owners of Happy Tails Dog Spa in Torrance, who said they thought they’d found her missing bird at their Torrance home. “I heard somebody whistling and saying, ‘Hello? Locatives in space. A Brief Guide to Embodied Cognition: Why You Are Not Your Brain - Guest Blog. Embodied cognition, the idea that the mind is not only connected to the body but that the body influences the mind, is one of the more counter-intuitive ideas in cognitive science. 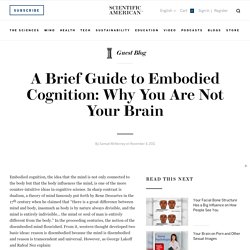 In sharp contrast is dualism, a theory of mind famously put forth by Rene Descartes in the 17th century when he claimed that “there is a great difference between mind and body, inasmuch as body is by nature always divisible, and the mind is entirely indivisible... the mind or soul of man is entirely different from the body.” In the proceeding centuries, the notion of the disembodied mind flourished. From it, western thought developed two basic ideas: reason is disembodied because the mind is disembodied and reason is transcendent and universal. However, as George Lakoff and Rafeal Nez explain: Cognitive science calls this entire philosophical worldview into serious question on empirical grounds... Linguistica - Editorial Ariel. Which Animals Can Differentiate Between Languages? Sounding out ideas on language, vivid sensory words, and iconicity. 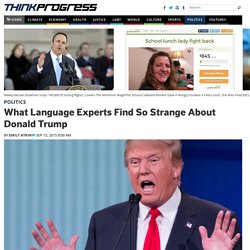 You’ve probably noticed, but can’t quite put your finger down on why. Fascinating analysis of the way Trump uses words / Boing Boing. Nerdwriter broke down the words Donald Trump uses when he answers questions. 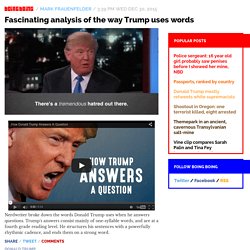 Trump's answers consist mainly of one-syllable words, and are at a fourth grade reading level. Lenguaje Extraterrestre/ Alien language. Emoji Deixis: When emoji don’t face the way you... On my train trip home from working in ‘the city’ the other day, I wanted to send my partner a message to that effect. 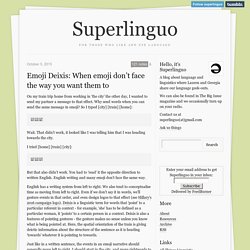 Why send words when you can send the same message in emoji? Subsumptive analogies: Unless you write ad copy, stick to regular similes instead. Linguistic humor. Linguistics and English Language at the University of Edinburgh. The Zipf Mystery. Can a Computer Make a Meme? How is language evolving on the internet? 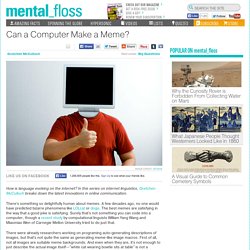 In this series on internet linguistics, Gretchen McCulloch breaks down the latest innovations in online communication. There's something so delightfully human about memes. A few decades ago, no one would have predicted bizarre phenomena like LOLcat or doge. The best memes are satisfying in the way that a good joke is satisfying. Surely that's not something you can code into a computer, though a recent study by computational linguists William Yang Wang and Miaomiao Wen of Carnegie Mellon University tried to do just that. The Ling Space. Beatrice Santorini, Linguistic humor. Caring, more or less. 7 Ways the Internet Is Improving Language.

How is language evolving on the Internet? 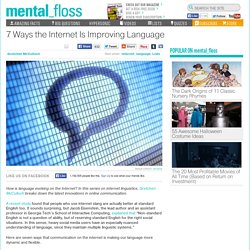 In this series on internet linguistics, Gretchen McCulloch breaks down the latest innovations in online communication. A recent study found that people who use internet slang are actually better at standard English too. It sounds surprising, but Jacob Eisenstein, the lead author and an assistant professor in Georgia Tech’s School of Interactive Computing, explained that “Non-standard English is not a question of ability, but of reserving standard English for the right social situations. In this sense, heavy social media users have an especially nuanced understanding of language, since they maintain multiple linguistic systems.” Here are seven ways that communication on the internet is making our language more dynamic and flexible. What Does "OK" Stand For, Anyway? I'm pretty sure OK comes from morse code operators (telegrams). 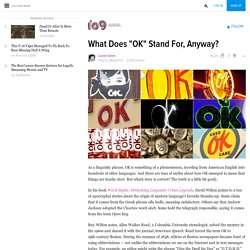 Point A would tap out L.O. (for Line Operator) and the response from point B would be O.K. (On Key). Eggcorn: The Invented Word That Describes Invented Words. The strange quest for a universal, "Earth Standard" language. A brief history of four letter words. What is the fastest way to learn a foreign language? English Phonetic Transcription. Grammar vs. Spelling. An algorithm to figure out your gender. Twitter opened its analytics platform to every user on August 27, allowing all of us — not just verified users and those with advertising accounts — to track how many people viewed and acted upon our tweets. 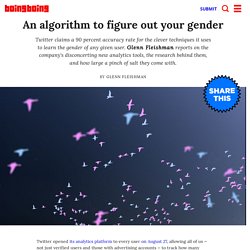 But the "Followers" section, revealing demographics, provoked the most discussion. Alongside breakdowns in followers' interests and location is a gender bar that splits followers into male and female. Many women were surprised how many of their followers — whether they had hundreds or thousands — were men. The ratio is often in the 75 to 80 percent range, and it's easy to find thousands of tweets reporting so.

Las implicaturas conversacionales - Articulos. Could an Animal’s Name Save It from Extinction? Endless Canadian Argument. Who Can Save Ayapaneco? Ayapaneco is a dying Mexican language with only two living speakers left…who refuse to speak to each other. Thanks to the stubbornness of two bitter old men—don Manuel and don Isidro (who’s nicknamed Chilo)—a language will be lost forever. This story has something so compelling, so primordial, that it keeps getting repeated—in prime time news broadcasts and public radio broadcasts, on websites, and in magazines around the globe—even though it’s entirely untrue. Because of my expertise in the languages and communities of the area, every month I receive emails from curious journalists, documentary filmmakers, and linguistics majors eager to capture the Manuel-versus-Isidro conflict in more detail.

I try to tell them the real story of Ayapaneco. Before we get to ergativity, unaccusitivity and... Thanks so much to All Things Linguistic for setting up the Crowdsourced Linguistics project. We tend to prattle on about things we know, or find interesting, so it’s great to get an idea of what some people find bamboozling or tricky about language! I offered to help explain the collected jargon of ergative, accusative, unaccusative and unergative.

I still remember sitting in undergraduate classes and trying to get my head around ergativity, so for anyone trying to puzzle it out, I feel your pain. Indo-European Lexicon: Pokorny Master PIE Etyma. On the Origin of Languages: Studies in Linguistic Taxonomy - Merritt Ruhlen - Google Books. This book presents a series of illuminating studies which conclusively demonstrates that the prevailing conception of historical linguistics is deeply flawed. Most linguists today believe that there is no good evidence that the Indo-European family of languages is related to any other language family, or even any other language. In like manner, the New World is deemed to contain hundreds of language families, among which there are no apparent links. Furthermore, it is claimed, there are no known connections between the languages of the Old World and those of the Americas.

Vancouver School Board Introduces Gender-Neutral Pronouns. Transcriptor fonético automático. Transcriptor - Para transcribir fonéticamente en AFI o en SAMPA. You Know What's Bullshit!? - Word Pronunciations. How language evolved: Laying the foundations - 01 December 2010. A Chart of Emotions that Have No Names in the English Language. A software program that could reconstruct the earliest human languages. The Fascinating Evolution Of Language In The Iberian Peninsula.

How human language could have evolved from birdsong. John McWhorter: A surprising new language. The Xenotext Works : Christian Bök : Harriet the Blog. Literally Everyone In The World Knows What You Mean When You Say 'Huh' Listen to what our ancestors' language sounded like 6,000 years ago. Use of 'language of deceit' betrays scientific fraud - tech - 29 August 2014.

Emailing angry? Your keyboard feels your pain - tech - 29 August 2014. Make People Mute By Forcing Them To Listen to Themselves. 10 Words You Didn't Know Used to Be Dirty. Sounding out ideas on language, vivid sensory words, and iconicity. Annual Report 2013: The State of Linguistics in Higher Education. The rather creepy 19th-century machine that spoke with a human voice.

Minority languages: Cookies, caches and cows. Minority languages: Cookies, caches and cows. You were born with an accent. The Religious Origins Of The @ Sign. How to raise a language from the dead. 'Accentism': New classism determines social status in UK. Anne Curzan: What makes a word "real"? Diccionario de mexicanismos. Unete al proyecto. Can You Trust Your Ears? (Audio Illusions) Soul-crushing office-speak spreads - Boing Boing. 13 phrases only Mexicans understand.