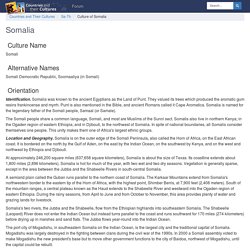 Somalia was known to the ancient Egyptians as the Land of Punt. They valued its trees which produced the aromatic gum resins frankincense and myrrh. The Somali people share a common language, Somali, and most are Muslims of the Sunni sect. Location and Geography. At approximately 246,200 square miles (637,658 square kilometers), Somalia is about the size of Texas. A semiarid plain called the Guban runs parallel to the northern coast of Somalia. Somalia's two rivers, the Jubba and the Shabeelle, flow from the Ethiopian highlands into southeastern Somalia.

The port city of Mogadishu, in southeastern Somalia on the Indian Ocean, is the largest city and the traditional capital of Somalia. Demography. Somalia Linguistic Affiliation. Arabic, the language of the Qur'an, is spoken and read for religious purposes. Symbolism. The leopard is considered the national symbol of Somalia. Trade. Somalia - History Background - Somalis, Educational, Language, and Education.

The Somali Democratic Republic is located in northeast Africa, in the region known as the Horn of Africa. 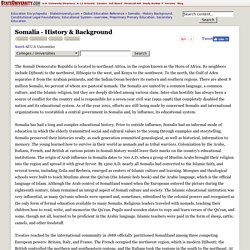 Its neighbors include Djibouti to the northwest, Ethiopia to the west, and Kenya to the southwest. To the north, the Gulf of Aden separates it from the Arabian peninsula, and the Indian Ocean borders its eastern and southern regions. There are about 8 million Somalis, 60 percent of whom are pastoral nomads. The Somalis are united by a common language, a common culture, and the Islamic religion, but they are deeply divided among various clans.

Inter-clan hostility has always been a source of conflict for the country and is responsible for a seven-year civil war (1991-1998) that completely disabled the nation and its educational system. Somalia has had a long and complex educational history. Treaties reached by the international community in 1888 officially partitioned Somaliland among three competing European powers: Britain, Italy, and France. Somalia profile - Overview. Created in 1960 from a former British protectorate and an Italian colony, Somalia collapsed into anarchy following the overthrow of the military regime of President Siad Barre in 1991. 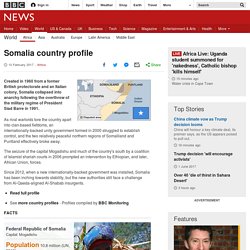 As rival warlords tore the country apart into clan-based fiefdoms, an internationally-backed unity government formed in 2000 struggled to establish control, and the two relatively peaceful northern regions of Somaliland and Puntland effectively broke away. The seizure of the capital Mogadishu and much of the country's south by a coalition of Islamist shariah courts in 2006 prompted an intervention by Ethiopian, and later, African Union, forces.

Since 2012, when a new internationally-backed government was installed, Somalia has been inching towards stability, but the new authorities still face a challenge from Al-Qaeda-aligned Al-Shabab insurgents. President: Mohamed Abdullahi Mohamed Image copyright Getty Images He has expressed readiness to talk to the Islamist al-Shabab militants. Image copyright AFP. Image result for somalia ma. Image result for background information somali.