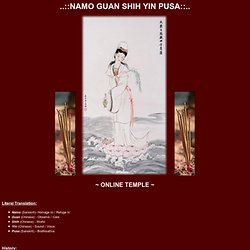 ::Namo Guan Shih Yin Pusa::.. ~ Online Temple ~ Literal Translation: Namo (Sanskrit)- Homage to / Refuge in Guan (Chinese) - Observe / Care Shih (Chinese) - World Yin (Chinese) - Sound / Voice Pusa (Sanskrit) - Bodhisattva History: Prayers: Prayers can be offered to Guan Yin from anywhere, and there are no hard and fast 'rules'... Below are a few of the acknowledged mantras: Traditional Guan Yin Chant - Audio Instrumental Hymn - Audio Guan Yin Lotus Sutra - Script Great Compassion Mantra - Script Prayer for the Abuser - Script Yellow-Paper Amulet - Script Taoism & Paganism: I don't practise the form of Paganism that most people would find familiar, although I used to read the Runes (cards), and was learning how to use the tarot deck, and bamboo oracle (I-Ching related) but gave up after awhile as I had a lot on my plate at the time. Guan Yin is my particular favourite...because of the serenity that she radiates. "The tao is omnipresent. 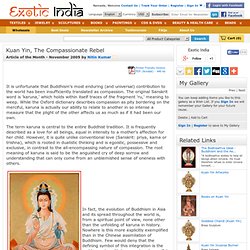 The original Sanskrit word is 'karuna,' which holds within itself traces of the fragment 'ru,' meaning to weep. While the Oxford dictionary describes compassion as pity bordering on the merciful, karuna is actually our ability to relate to another in so intense a measure that the plight of the other affects us as much as if it had been our own. The term karuna is central to the entire Buddhist tradition. It is frequently described as a love for all beings, equal in intensity to a mother's affection for her child. However, it is quite unlike conventional love (Sanskrit: priya, kama or trishna), which is rooted in dualistic thinking and is egoistic, possessive and exclusive, in contrast to the all-encompassing nature of compassion. There are many reasons why this gender transformation took place.

"I know how birds fly, fishes swim and animals run. The Legend of Quan Yin, Goddess of Mercy. Ne of the deities most frequently seen on altars in China's temples is Quan Yin (also spelled Kwan Yin, Kuanyin; in pinyin, Guanyin). 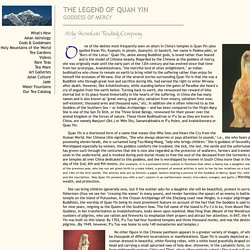 In Sanskrit, her name is Padma-pâni, or "Born of the Lotus. " Quan Yin, alone among Buddhist gods, is loved rather than feared and is the model of Chinese beauty. Kuan Yin. 21.6KGoogle + 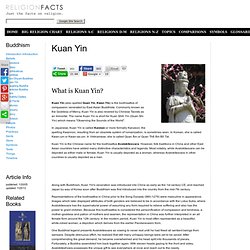 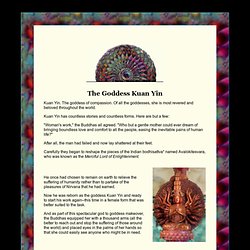 The goddess of compassion. Of all the goddesses, she is most revered and beloved throughout the world. Kuan Yin has countless stories and countless forms. Here are but a few: "Woman's work," the Buddhas all agreed. After all, the man had failed and now lay shattered at their feet. Kuan Yin. A mind perfected in the four virtues, A gold body filled with wisdom, Fringes of dangling pearls and jade, Scented bracelets set with lustrous treasures, Dark hair piled smoothly in a coiled-dragon bun, And elegant sashes lightly fluttering as phoenix quills, Her green jade buttons And white silk robe Bathed in holy light; Her velvet skirt And golden cords Wrapped by hallowed air, With brows of new moon shape And eyes like two bright stars, Her jadelike face beams natural joy, And her ruddy lips seem a flash of red. 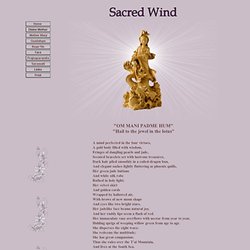 Her immaculate vase overflows with nectar from year to year, Holding sprigs of weeping willow green from age to age. She disperses the eight woes; She redeems the multitude; She has great compassion; Thus she rules over the T'ai Mountain, And lives at the South Sea. She saves the poor, searching for their voices, Ever heedful and solicitous, Ever wise and efficacious. Her orchid heart delights in green bamboos; Her chaste nature loves the wisteria. Mantra: OM MANI PADME HUM. Guanyin. Guanyin is the bodhisattva associated with compassion as venerated by East Asian Buddhists, usually as a female. 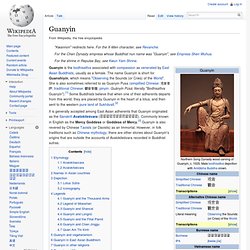 The name Guanyin is short for Guanshiyin, which means "Observing the Sounds (or Cries) of the World". She is also sometimes referred to as Guanyin Pusa (simplified Chinese: 观音菩萨; traditional Chinese: 觀音菩薩; pinyin: Guānyīn Púsà; literally "Bodhisattva Guanyin").[1] Some Buddhists believe that when one of their adherents departs from this world, they are placed by Guanyin in the heart of a lotus, and then sent to the western pure land of Sukhāvatī.[2] It is generally accepted among East Asian adherents that Guanyin originated as the Sanskrit Avalokiteśvara (अवलोकितेश्वर). Commonly known in English as the Mercy Goddess or Goddess of Mercy,[3] Guanyin is also revered by Chinese Taoists (or Daoists) as an Immortal. Etymology[edit] Avalokitasvara[edit] Kuan_yin_wf12.jpg (JPEG Image, 539 × 850 pixels) - Scaled (98%)