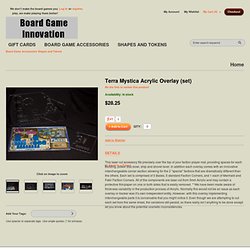 In addition each overlay comes with an innovative interchangeable corner section allowing for the 2 “special” factions that are dramatically different than the others. Each set is comprised of 5 Bases, 5 standard Faction Corners, and 1 each of Mermaid and Fakir Faction Corners. Eagle River Games. Dear FLGS, We need to talk. You see, I've met someone online.

Someone who can give me the same thing you give me, but cheaper. I'm not going to give you the "it's not you, it's me" speech, because ... well, it actually is you. We can still stay together, but you're going to have to make some changes. Do business a new way. . • Share retail space. . • Invest in a laser cutter to put into your shop. . • Start being a service-oriented business. Quote: • Local trade market - On your website and at a kiosk within your store, setup a game trading service where users can advertise game trades. . • Local workshops/seminars/classes - Offer painting classes, game design workshops and fiction writing seminars. . • Offer a playtesting service for designers worldwide, and free fun beta testing opportunities for local customers. These are just some starting-point ideas.

CraftMates - Boîte de rangement 5 casiers - Rangement - Transport - Scrapbooking. Patchistory. Patchistory is a strategy board game with cards that symbolize historical heroes and wonders, with the whole game being divided into three eras. 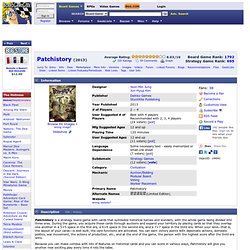 During the game, you acquire these cards through auctions and expand your territory by placing cards so that they overlap one another in a 5×5 space in the first era, a 6×6 space in the second era, and a 7×7 space in the third era. When your land—that is, the layout of your cards—is well built, the card functions are activated. You can earn victory points with diplomatic actions, domestic politics, war movement, the actions of production, etc., and at the end of the game, the person with the highest score after the third era wins. Because you can make combos with lots of features on historical cards and you can score in various ways, Patchistory will give you another new exciting play every time it hits the table. Subscriptions 2014 « Treefrog Games. The Treefrog Subscription Plan for 2014 The New Year is here and Treefrog is going back in time, to 2008 to be exact. 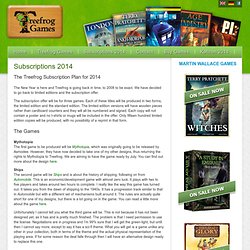 We have decided to go back to limited editions and the subscription offer. The subscription offer will be for three games. Each of these titles will be produced in two forms, the limited edition and the standard edition. The limited edition versions will have wooden pieces rather than cardboard counters and they will all be numbered and signed. The Games Mythotopia The first game to be produced will be Mythotopia, which was originally going to be released by Asmodee. Ships The second game will be Ships and is about the history of shipping, following on from Automobile. Unfortunately I cannot tell you what the third game will be. Gaming Unplugged Since 2000. GMT Games - The Hunters - 2nd Printing. German U-Boats at War, 1939-43 "Hostilities with England effective immediately. 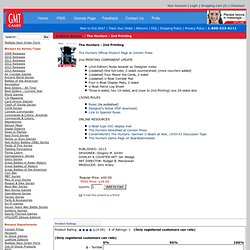 "the time is: 1256 hours, 3 September 1939 The Hunters is a solitaire tactical level game placing you in command of a German U-boat during WWII. Your mission is to destroy as much Allied Shipping and as many Capital ships as possible while advancing your crew quality and increasing your commander rank culminating in special decoration ‒ all while remembering you have to make it home. The Hunters is purposely designed to deliver a brisk yet intensive gaming experience that forces many decisions upon you as you will take command among the major German U-boat models in service during WWII, and try to complete an entire tour.

Those familiar with the classic Avalon Hill game title, B-17: Queen of the Skies, will come to enjoy the same type of gaming experience of the German U-boat War. Reprint coming soon? Jonathan Challis United KingdomHerne BayKent tontione wrote: Some informations that can perhaps make you more confident : -The designer Serge Laget works on this new rules for several years now. 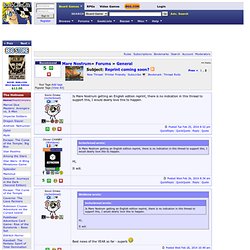 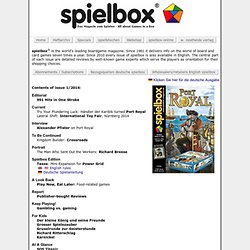 Since 1981 it delivers info on the world of board and card games seven times a year. Since 2010 every issue of spielbox is also available in English. The central part of each issue are detailed reviews by well-known game experts which serve the players as orientation for their shopping choices. Klicken Sie hier für die deutsche Ausgabe Contents of issue 1/2014: Editorial991 Hits in One Stroke Current Try Your Plundering Luck: Händler der Karibik turned Port Royal Lateral Shift: International Toy Fair, Nürnberg 2014 InterviewAlexander Pfister on Port Royal.