jQ.Mobi. A JavaScript Toolkit For Interactive & Real-Time Graphs – Rickshaw. Rickshaw is a JavaScript toolkit, created by the developers of the stock photo service Shutterstock, for generating interactive and real-time graphs. 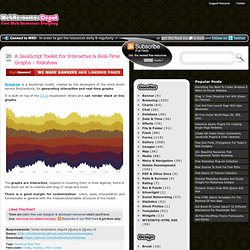 It is built on top of the D3.js visualization library and can render stack or line graphs.

List.js - Add search, sort and flexibility to plain HTML lists with cross-browser native JavaScript by @javve. PanoJS3 - JavaScript viewer for huge images. Add Change Tracking to Online Text Editing with Ice.js. Curtain.js – Create a page with multiple fixed panels that unroll with an amusing effect. CanJS – JavaScript framework that makes building web applications easy. Loop waveform visualizer. Analog or digital. You may have noticed that we’re fond of a bit of retro, so it was hard to resist this pixelated music video from Wildlife Control… from their blog: We were tinkering around with the SoundCloud API late one night several weeks ago and realized we could use the timing events and track comments to make something cool. 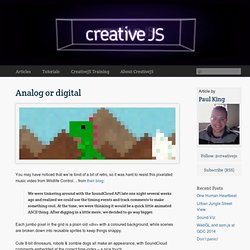 At the time, we were thinking it would be a quick little animated ASCII thing. Web-Drawing Throwdown: Paper.js Vs. Processing.js Vs. Raphael. Advertisement Before drawing anything in a browser, ask yourself three questions: Do you need to support older browsers? 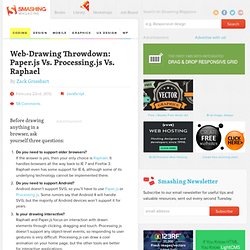 If the answer is yes, then your only choice is Raphaël. It handles browsers all the way back to IE 7 and Firefox 3. Braaains! I’m letting out my inner zombie, and I think you should, too! 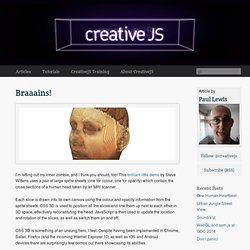 This brilliant little demo by Steve Wittens uses a pair of large sprite sheets (one for colour, one for opacity) which contain the cross sections of a human head taken by an MRI scanner. Each slice is drawn into its own canvas using the colour and opacity information from the sprite sheets. CSS 3D is used to position all the slices and line them up next to each other in 3D space, effectively reconstituting the head. JavaScript is then used to update the location and rotation of the slices, as well as switch them on and off. CSS 3D is something of an unsung hero, I feel. When combined with JavaScript it can be an extremely simple yet powerful renderer. "Lathe Machine" by Einar Öberg. Multiplayer music making with Plink! Trigger Rally – online edition. Trigger Rally is a fast-paced open source racing game for Linux, maintained by a small but dedicated team of developers. 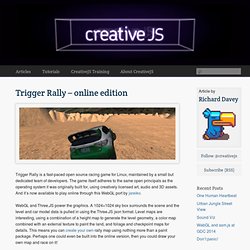 The game itself adheres to the same open principals as the operating system it was originally built for, using creatively licensed art, audio and 3D assets. "Input/Output" by Instrument. From the Author: Launch the particle from the input to the output in this HTML5 game developed for Google I/O 2012. 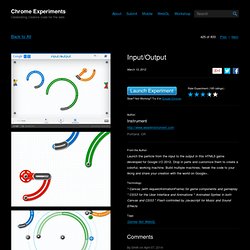 Drop in parts and customize them to create a colorful, working machine. Build multiple machines, tweak the code to your liking and share your creation with the world on Google+. Technology: * Canvas (with requestAnimationFrame) for game components and gameplay * CSS3 for the User Interface and Animations * Animated Sprites in both Canvas and CSS3 * Flash controlled by Javascript for Music and Sound Effects Tags: Games Not WebGL. SearchMeme – A jQuery plugin for on-demand search. Heatmap.js – A HTML5 canvas heatmap library. jQuery Menu: Dropdown, iPod Drilldown, and Flyout styles with ARIA Support and ThemeRoller Ready. Posted by Maggie on 04/02/2009 Topics: css jQuery jQuery UI ThemeRoller ui design Update: We contributed this menu plugin to the jQuery UI library. 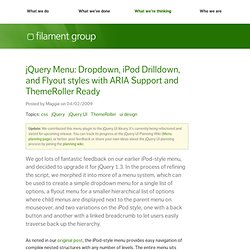 SlabText – a jQuery plugin for creating big, bold & responsive headlines. I’ve been wanting to attempt a port of Erik Loyer’s slabtype algorithm for quite some time now and seeing Paravel’s fittext jQuery plugin, in combination with a gloriously hassle-free lunch hour gave me the impetus to attempt it. 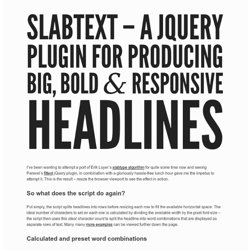 This is the result – resize the browser viewport to see the effect in action. So what does the script do again? Put simply, the script splits headlines into rows before resizing each row to fill the available horizontal space. The ideal number of characters to set on each row is calculated by dividing the available width by the pixel font-size – the script then uses this ideal character count to split the headline into word combinations that are displayed as separate rows of text.

Blur Any Web Element Easily – Blur.js. Blur.js is a flexible jQuery plugin for implementing blur effect to any web element. 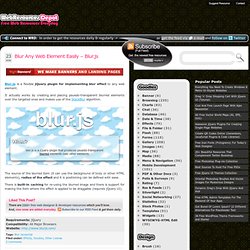 It actually works by creating and placing psuedo-transparent blurred elements over the targeted ones and makes use of the StackBlur algorithm. JS1K Speech Synthesizer. When you think of your computer talking to you it’s usually space aged computers and robots, or maybe Siri if you’re less imaginative. 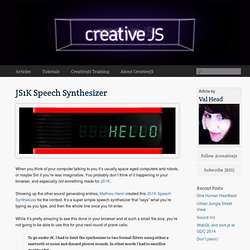 You probably don’t think of it happening in your browser, and especially not something made for JS1K. Showing up the other sound generating entries, Mathieu Henri created this JS1K Speech Synthesizer for the contest. It’s a super simple speech synthesizer that “says” what you’re typing as you type, and then the whole line once you hit enter.