Religulous Script - transcript from the screenplay and/or the Bill Maher movie. Religulous. Religulous /rɨˈlɪdʒʉləs/ is a 2008 American documentary film written by and starring comedian Bill Maher and directed by Larry Charles. 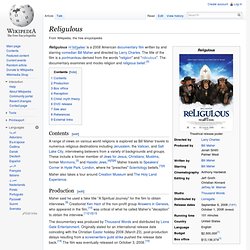 The title of the film is a portmanteau derived from the words "religion" and "ridiculous". The documentary examines and mocks religion and religious belief.[2] Contents[edit] A range of views on various world religions is explored as Bill Maher travels to numerous religious destinations including Jerusalem, the Vatican, and Salt Lake City, interviewing believers from a variety of backgrounds and groups. 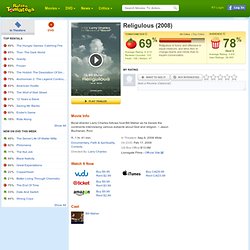 Maher is essentially and professionally a comic, and the measure of this movie is not just the thoughts it provokes but the laughs it generates. I think this is an important movie, challenging, many beliefs that many of us seem unwilling to talk about. Mainly, though, you'll laugh...a lot. Religulous has an unholy fervor that should start many bonfires. Religulous - Trailer. Religulous (2008) - Memorable quotes.