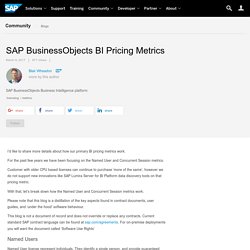 For the past few years we have been focusing on the Named User and Concurrent Session metrics. Customer with older CPU based licenses can continue to purchase ‘more of the same’, however we do not support new innovations like SAP Lumira Server for BI Platform data discovery tools on that pricing metric. With that, let’s break down how the Named User and Concurrent Session metrics work. Please note that this blog is a distillation of the key aspects found in contract documents, user guides, and ‘under the hood’ software behaviour. This blog is not a document of record and does not override or replace any contracts. Named Users. SAP Business Intelligence Platform Pattern Books - Business Intelligence (BusinessObjects) - SCN Wiki.

The 2015 guide to SAP BusinessObjects BI 4.1 improvements for managin… 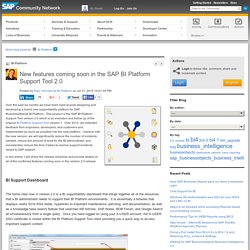 This product is the SAP BI Platform Support Tool version 2.0 which is an evolution and follow up of the original BI Platform Support Tool version 1. Over 2014, we collected feedback from engineers, developers, and customers and implemented as much as possible into the new platform. I believe with the new version, we will significantly reduce the number of incidents needed, reduce the amount of work for the BI administrator, and considerably reduce the time it takes to resolve support incidents raised to SAP support.

Adding Bulk Users & Groups in SAP BI 4.x: R... Recently while working on a requirement where I had to add multiple users in BI 4.1 SP04, I sort of missed the Import Wizard and I am sure most of us still do. 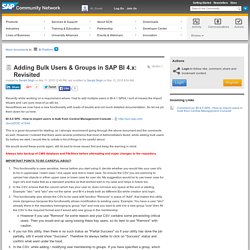 Neverthless we now have a new functionality with loads of doubts and not much detailed documentation. So let me jot them down for us here: BI 4.0 SP6 - How to import users in bulk from Central Management Console - This is a good document for starting, so I strongly recommend going through the above document and the comments as well. However I noticed that there were several problems that most of Administrators faced, while adding bulk users.

We would revisit these points again, still its best to know issues first and keep the warning in mind: Always take backup of CMS database and FileStore before attempting and major changes to the repository. This functionality is case sensitive, hence before you start using it, decide whether you would like your user id's to be in uppercase / lower case / one upper and rest in lower case. A. B. Cluster Key Issues! - Recent blog posts - IT Performs Blog. A Cluster Key is a symmetric key wrapping key, which protects the cryptographic keys.

These cryptographic keys are stored in the CMS Repository. The Cluster Key maintains a level of access control to the CMS repository. It should be noted at this point, that each node will have its own cluster key (Therefore, if you have a clustered environment, each node will have a different cluster key). Atlassian Cloud. BusinessObjects 4.0 .BIAR Backup Script.

Printing (or not printing) Crystal Reports with SAP BusinessObjects BI 4.1. I recently wrapped up a BI 4.1 upgrade project that was 80% Crystal Reports and 20% Web Intelligence. 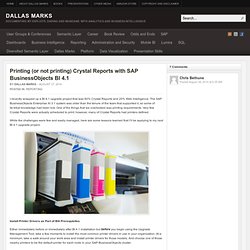 The SAP BusinessObjects Enterprise XI 3.1 system was older than the tenure of the team that supported it, so some of its tribal knowledge had been lost. One of the things that we overlooked was printing requirements. Very few Crystal Reports were actually scheduled to print; however, many of Crystal Reports had printers defined. While the challenges were few and easily managed, here are some lessons learned that I’ll be applying to my next BI 4.1 upgrade project.

Install Printer Drivers as Part of BI4 Prerequisites Either immediately before or immediately after BI 4.1 installation but before you begin using the Upgrade Management Tool, take a few moments to install the most common printer drivers in use in your organization. BusinessObjects Mobile 4.0. How to Delete Stale BI4 User Sessions with biUs. Since the release of BI 4.0 (and going back as far as XI 3.x and XI R2), we've had various issues related to stale user sessions. 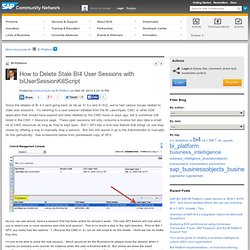 I'm referring to a user session initiated from the BI Launchpad, CMC or other SDK application that should have expired and been deleted by the CMS hours or days ago, but is somehow still listed in the CMC > Sessions page. These open sessions not only consume a license but also take a small bit of CMS resources as long as they're kept open. BI4.1 SP3 has a nice new feature that brings us one step closer by offering a way to manually drop a session. 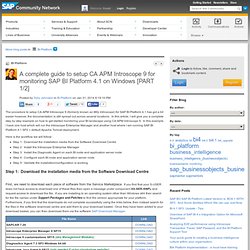 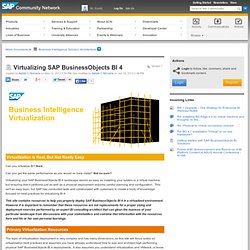 Sure. Can you get the same performance as you would on bare metal? Not so sure? Please integrate the integrated enterprise BI platform. Earlier this week, SAP hosted one of their ongoing SAP Analytics Innovation Community calls for Self-Service BI and SAP Lumira, hosted by my fellow Diversified Semantic Layer contributors Jamie Oswald and Josh Fletcher with presentations by SAP’s Jayne Landry, Olivier Duvelleroy, and Aaron Graber (see Nic Smith’s official wrap-up article). 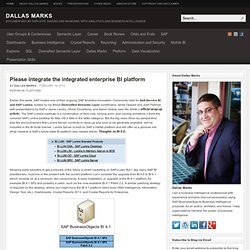 The SAP Lumira roadmap is a combination of here now, coming soon, and coming sometime (I think the rumored SAP Lumira Desktop for Mac OS X falls in the latter category). But the big news (from my perspective) was the announcement that Lumira Server, currently in ramp-up and soon to be generally available, will be included in the BI Suite license.

Lumira Server is built on SAP’s HANA platform and will offer us a glimpse into what I believe is SAP’s future-state BI platform (see related article, Thoughts on BI 5.0). Allowing early adopters to get a preview of the future is smart marketing on SAP’s part. But what if you are using Explorer? BI Platform & Data Services Patch History A. When investigating a problem on a SAP BusinessObjects node, it is often very helpful to understand what software has been installed on the host and in what order was it installed. 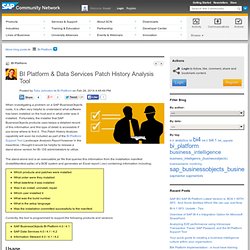 Fortunately, the installer that SAP BusinessObjects products uses keeps a detailed record of this information and this type of detail is accessible if you know where to find it. This Patch History Analysis capability will soon be included as part of the BI Platform Support Tool Landscape Analysis Report however in the meantime, I thought it would be helpful to release a stand-alone version for BI / DS administrators to utilize. The stand-alone tool is an executable jar file that queries this information from the installation manifest (InstallManifest.sqlite) of a BOE system and generates an Excel report (.csv) containing information including: Currently, the tool is programmed to support the following products and versions Usage.

Changing Business Objects Timeout Settings. BI Platform Support Tool - Business Intelligence (BusinessObjects. E2E Trace Wizard The E2E Trace Wizard simplifies the process of executing and collecting E2E traces in SAP BI Platform 4.x. In landscapes where there are multiple SIA nodes and application server nodes, the collection of logs from each server can be a very time consuming and tedious task. Additionally, before each trace session the global BO_trace.ini on each SIA node must be updated manually otherwise the GLF logs will be overwritten and the E2E trace will be incomplete. When the trace session is complete, then you must revert each global BO_trace.ini back to the original settings again to prevent too many logs from being generated. The E2E Trace Wizard addresses these issues by automating the setting of BO_trace.ini on each node and automatically collecting / zipping the necessary logs from each node in the landscape.

Splitting the Adaptive Processing Server: SAP BI Platform 4.0. Sybase SQL Anywhere Database Client Download. SAP BusinessObjects BI 4.1 Build Date and Version. – November 13, 2013Posted in: Administration and Security In SAP BusinessObjects Business Intelligence 4.1, the build date, build number, and product version no longer appear in the Central Management Console (CMC) under Settings -> Properties as they did in prior releases. Instead, the version number can be determined from Help -> About. And the build date, build number, and product version can be found under Servers > Central Management Server > Metrics.

But having multiple Adaptive Job Servers if you really want them sounds like something that should work on paper but doesn’t in practice. 1679970 - How to reset the Administrator password in Business Intelligence Platform 4.0.

[XI 3.1] SP6 Imminent...? Yes! Our issue was upgrading from SP02 to SP04 i believe, but the exact same problem, WinAD stopped working entirely. (Ours I believe was due to the Tomcat version upgrade) I went through all the AD settings myself and again with the tech who confirmed it was all set up properly. He tried monkeying with several tomcat settings but they didn't work. BI Platform: Getting an Update on BI4 Maintenan. BI Platform Migration. Windows Server. Monitoring. BusinessObjects 4.0 Sizing Companion Guide. I'd like to address p.56, under Web Intelligence tuning.

"Multiple Processing Instances It is not recommended that you run multiple WebI Processing Server instances on the same machine. The two services can degrade the performance of each other as they make heavy use of I/O bandwidth, BI Platform: What administrators need to know a.