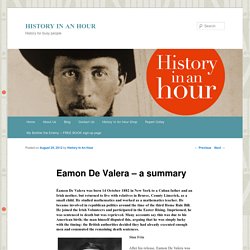 He became President of Sinn Féin the same year. He was rearrested in 1918 for allegedly plotting with the Germans (a baseless accusation) and held in Lincoln jail, from which he escaped dramatically with two other inmates, using a copy of the Catholic chaplain’s key. While on the run de Valera was elected leader of the first Dáil. He went to America in June 1919, where he campaigned and raised funds (around $6 million) for the Irish republic. The refusal of Éamon de Valera to lead the Irish delegation is impossible to explain satisfactorily. None of these explanation are completely convincing and it is hard to disagree with the assessment that the Irish team went out without its strongest player. 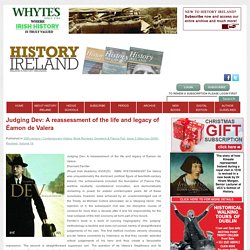 His achievements included the foundation of Fianna Fáil, wartime neutrality, constitutional innovation, and democratically remaining in power for sixteen uninterrupted years. All of these successes, however, were achieved by an unacknowledged use of the Treaty, as Michael Collins advocated, as a ‘stepping stone’. His rejection of it, the subsequent civil war, his disruptive course of conduct for more than a decade after it and his responsibility for the near-collapse of the Irish economy all form part of his record. Ferriter’s book is a work of cunning hagiography.

Ferriter does not mention this statement. Url?sa=t&rct=j&q=&esrc=s&source=web&cd=25&cad=rja&uact=8&ved=0ahUKEwivsZ2pnZ_KAhVCDg8KHejyCec4ChAWCFswDg&url= A highlight of this year’s Dublin Theatre Festival was the Rough Magic Theatre Company’s production of The Train, a musical by Arthur Riordan and Bill Whelan. 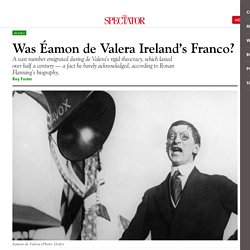 Political theatre at its wittiest and craziest, it told the story of the fledgling Irish Women’s Liberation Movement’s publicised trip in 1971 to Belfast to buy contraceptives, ostentatiously importing these banned Satanic devices back into the Republic, where the law obeyed the writ of the Catholic church. Watching it, one was reminded of the sheer extent of theocracy in Éamon de Valera’s Ireland (he remained president till 1973, having been Taoiseach for most of the period from 1932 to 1959), and the long journey from those days to this year’s equal marriage referendum.

Ronan Fanning’s crisp, economical but deeply thought-provoking biography anatomises de Valera’s influence, and reminds us just how transformed the country is since his heyday. Fanning’s description of ‘engineering a separation’ is well put. Éamon de Valera: A Will to Power review – the man who made modern Ireland. When Winston Churchill attacked Irish taoiseach Éamon de Valera 70 years ago at the end of the second world war for what he regarded as southern Ireland’s shameful neutrality, De Valera responded in a dignified and firm way. 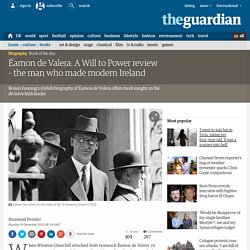 Irish neutrality was the logical culmination of De Valera’s mission to achieve Irish sovereignty, and as far as he was concerned the capacity to implement an independent foreign policy was the ultimate measure of that sovereignty. That he had managed to guide southern Ireland to that point was testament to his political success, nearly 20 years after Churchill, as secretary of state for the colonies, had suggested De Valera “may gradually come to personify not a cause but a catastrophe”.

Despite the deep-rooted antagonism between the two wartime leaders, they had much in common. Both had extraordinary political longevity, made spectacular comebacks after political defeat and humiliation and felt they were walking with destiny. Eamonn de Valera. Eamonn de Valera played a key role in Ireland’s recent history. 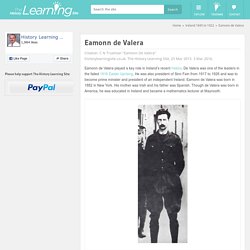 De Valera was one of the leaders in the failed 1916 Easter Uprising. He was also president of Sinn Fein from 1917 to 1926 and was to become prime minister and president of an independent Ireland. Eamonn de Valera was born in 1882 in New York. His mother was Irish and his father was Spanish. Though de Valera was born in America, he was educated in Ireland and became a mathematics lecturer at Maynooth. De Valera developed a passionate love of Ireland and hated what he considered to be the English domination and control of the island. By 1922, Ireland had effective independence but this was not enough for de Valera.

In 1926, de Valera decided that it was in the interests of Ireland to accept the new Irish parliament (the Dáil) and he founded a new political party called Fianna Fáil which served as an opposition party from 1926 to 1932. History - 1916 Easter Rising - Profiles - Eamon de Valera. History - Eamon de Valera.