Why Android will gain HUGE tablet marketshare later this year. Today I took a brief break from my family vacation to visit Vizio’s and Oakley’s headquarters down in Southern California with my friends Marc Ostrick and Sam Levin to get up to date on the latest 3D technologies from both companies. 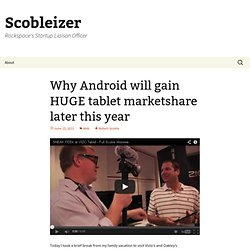 But while there Vizio pulled out their new Tablet and it shocked me what I thought of it (I’ve hated the Android tablets so far, when compared to iPad 2). Mark Ostrick, of eGuiders, shot this video (you should follow his YouTube channel). Sam Levin does a cool gadget podcast for app freaks at AppMinute. I finally had someone explain to me why Android will gain huge marketshare this year in the large-screen tablet wars (aka where iPad is dominant).

How A Great Product Can Be Bad News. Apple’s iPad is here. 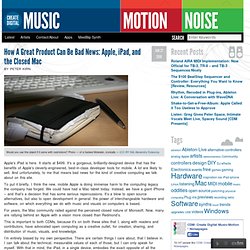 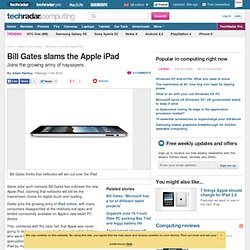 Gates joins the growing army of iPad critics, with many consumers disappointed at the relatively low-spec and limited connectivity available on Apple's new tablet PC device. This, combined with the clear fact that Apple was never going to deliver a new computer that would satisfy its fans who were hyped on the pre-release rumour and speculation, has led to a somewhat muted response to the iPad by many. Netbooks will win out Jobs' longtime rival, Bill Gates said of the new iPad: "You know, I'm a big believer in touch and digital reading, but I still think that some mixture of voice, the pen and a real keyboard - in other words a netbook - will be the mainstream on that. iPad reveals Microsoft Tablet PCs as flawed. What about Google? First a disclaimer: Apple’s new iPad didn’t meet expectations, either mine, or the folks who I’ve been talking with on Twitter. 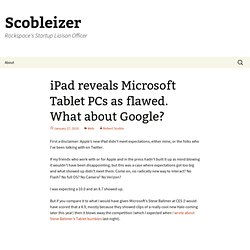 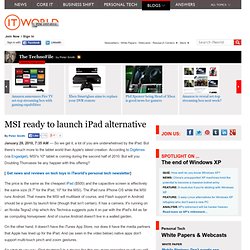 But there's much more to the tablet world than Apple's latest creation. According to Digitimes (via Engadget), MSI's 10" tablet is coming during the second half of 2010. But will you Doubting Thomases be any happier with this offering? [ Get news and reviews on tech toys in ITworld's personal tech newsletter] The price is the same as the cheapest iPad ($500) and the capacitive screen is effectively the same size (9.7" for the iPad, 10" for the MSI).

Consumers lose interest in iPad after Apple's unveiling - survey. By Katie Marsal Despite a highly publicized public debut, potential customers lost a great deal of interest in Apple's new touchscreen iPad after it was unveiled, a new study has found. 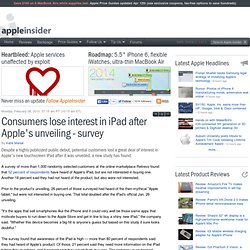 8 Things That Suck About the iPad - apple ipad - Gizmodo. Pictures: The iPad Being Manhandled. How the iPad is Changing Interaction Design - ReadWriteStart. Applications that looked amazing on larger multi-touch experiences like Microsoft Surface may have a more affordable consumer-facing counterpart. 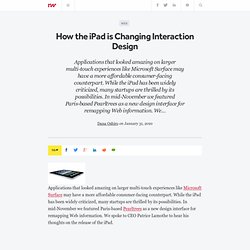 While the iPad has been widely criticized, many startups are thrilled by its possibilities. In mid-November we featured Paris-based Pearltrees as a new design interface for remapping Web information. We spoke to CEO Patrice Lamothe to hear his thoughts on the release of the iPad. Pearltrees is a new way of organizing information where users create mindmap-style visualizations of their favorite websites and Web-based media.

Adobe CEO: Android Will Overtake iPad Just Like it Did the iPhone (Video) – AllThingsD. Adobe’s Shantanu Narayen debunked a myth today at D that there’s an ongoing feud between it and Apple over running Flash on iOS. Still, he didn’t hesitate downplaying Apple’s early lead in the tablet market, saying over the long-term, he is putting his money on Google’s Android, which runs Flash (coincidentally). “What you saw with smartphones hitting an inflection point with Android, you’ll see it again with tablets,” he said. He also named both HP and RIM as two companies that will gain traction in the enterprise. Both of those platforms also support Flash. 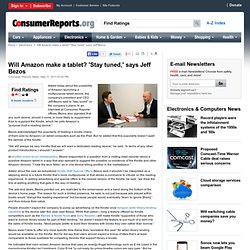 In an interview at Consumer Reports' offices, Bezos also signaled that any such device, should it come, is more likely to supplement than to supplant the Kindle, which he calls Amazon’s “purpose-built e-reading device.” Bezos acknowledged the popularity of reading e-books (many of them sold by Amazon) on tablet computers such as the iPad. But he added that this popularity doesn’t spell the demise of the Kindle.

“We will always be very mindful that we will want a dedicated reading device,” he said. “In terms of any other product introductions, I shouldn’t answer.” Rumor: Amazon has an “entire family” of Android devices coming this holiday – Android and Me. Amazon’s Android tablet is both the best and worst kept secret in the mobile industry. 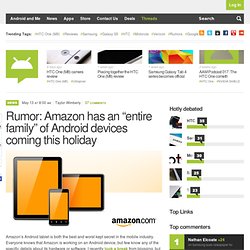 Everyone knows that Amazon is working on an Android device, but few know any of the specific details about its hardware or software. I recently took a break from blogging, but I had to come out of retirement for this post because it’s the most interesting Android topic that still remains a mystery. Read on after the jump to see what details I have dug up. The Rumor Amazon has an “entire family” of Android devices that will launch this holiday shopping season. Google survey finds games trump all other uses for tablets. A survey of more than 1,400 tablet owners in the US by Google's AdMob subsidiary has found that gaming is the most popular use for these devices, considerably ahead of music, video and ebooks. 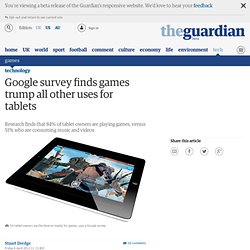 According to the survey, 84% of tablet owners play games, ahead of even searching for information (78%), emailing (74%) and reading the news (61%). 56% of tablet owners use social networking services on their device, while 51% consume music and/or videos, and 46% read ebooks. I Don't Like The iPad Because... …it’s driven by the same old media love affair with distribution lock in. I’ve been on about this ever since I studied Google in 2001: Media traditionally has gained its profits by owning distribution. Cable carriage, network airwaves, newsstand distribution and printing presses: all very expensive, so once you employ enough capital to gain them, it’s damn hard to get knocked out.

The web changed all that and promised that economics in the media business would be driven by content and intent: the best content will win, driven by the declared intent of consumers who find it and share it. Search+Social was the biggest wave to hit media since the printing press. And the open technology to make better and better experiences has been on a ten year tear: blogging software, Flash, Ajax, HTML 5, Android, and more and more coming. But the iPad, just like the iPhone, is designed for vertical integration and distribution lock in. HP Slate makes an appearance to show off Flash, stays for a rock. Ipad - l'ordinateur du 3ème age. Report: The iPad won’t go mass market anytime soon.

The whokle problem of consummer research applied to tech innovation is at most new tech products never fill needs... They create them. Neither Twitter, nor Facebook, Google... or even the internet would have done well in intial studies. – Patrice

And despite the warm reception the iPad has received from consumers, it hasn't exactly meant overnight success for publishers that have rushed to develop iPad versions of their magazines. Web developers can rule the iPad. A lot of tech commentators seem disappointed that the iPad feels more like an evolutionary step than a revolutionary step. For one group of technologists, though, the iPad is an opportunity for revolution, to take center stage in creating experiences users will want, and even want to buy. More iPad thoughts. iPad vs EtchASketch.