Using Showbie with the SAMR Model. What is SAMR? 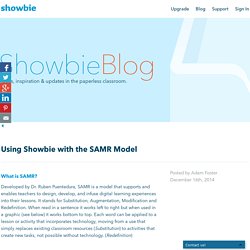 Developed by Dr. Office for iPad: Free for Everyone. Last week, Microsoft surprised a lot of people when they made Word, Excel and PowerPoint completely free for iOS devices. 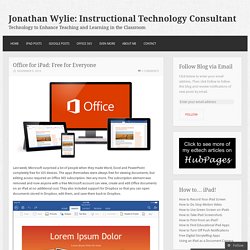 The apps themselves were always free for viewing documents, but editing access required an Office 365 subscription. Not any more. The subscription element was removed and now anyone with a free Microsoft account can view, create and edit Office documents on an iPad at no additional cost. They also included support for Dropbox so that you can open documents stored in Dropbox, edit them, and save them back to Dropbox. The Refinery of Life: My Top 5 iPad Apps for the Classroom Series: Keynote. The use of iPads in schools has grown tremendously over the past few years. 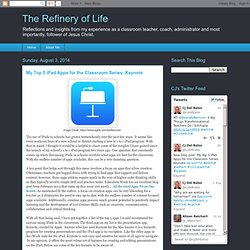 It seems like every week you hear of a new school or district starting a new to 1 to 1 iPad program. With that in mind, I thought it would be a helpful to share some of the insights I have gained since the launch of my school's 1 to 1 iPad program two years ago. One question that constantly comes up when discussing iPads in schools involves what apps are best for the classroom. With the endless number of apps available, this can be a very daunting question.A key point that helps sort through this mess involves a focus on apps that allow creation.

Oftentimes, teachers get bogged down with trying to find apps that support and deliver content; however, these apps seldom require much in the way of higher order thinking skills as they typically involve simple drill and practice tasks. Most office workers aren't actually using Microsoft Office. By Daniel Eran Dilger Businesses that license Microsoft Office company-wide are wasting money because few employees actually make significant use of the programs, according to the results of new app usage study. 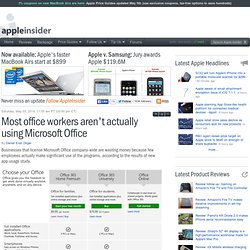 According to a report by John E Dunn for PC World, startup firm SoftWatch has been studying how employees use Office apps and concluded that many businesses can save significant resources by switching from Office to cheaper cloud-based applications. SoftWatch said that in a study of 148,500 employees across 51 international companies that licensed Microsoft Office, 70 percent of employees were only using the productivity software for viewing or light editing. "What the study seems to be telling us is that the age of the all-purpose Office suite based on monolithic licensing has probably had its day because most users simply don't use applications often enough to justify the cost. 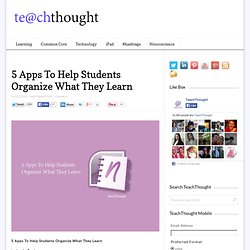 Here’s a list of apps that can help them stay organized when they’re working on group presentations, research papers or other big tasks that might take a little extra energy to keep everything together. 1. Microsoft OneNote Probably the most powerful and versatile app here, OneNote can act like a digital notebook, locker, and collaboration grounds for project-based learning, mobile learning, and other portfolio-heavy approaches to understanding. Available for Android, iPad, and PC, OneNote is the original organizational tool–Evernote before there was Evernote, allowing students to separate notes into notebooks, and then pages within each notebook.

It’s also free and available for every major operating system, desktop or mobile. 2. iStudiez 3. 4. Not every student learns about mind mapping in school, but those who do almost never forget it. 5. 7 best word processing apps for tablets. Will Microsoft Word come to the iPad? 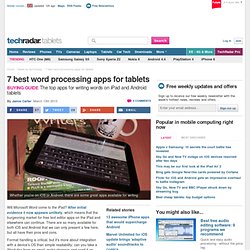 After initial evidence it now appears unlikely, which means that the burgeoning market for free text editor apps on the iPad and elsewhere can continue. There are so many available for both iOS and Android that we can only present a few here, but all have their pros and cons. Did You Know: Note Links, and How to Use Them. Posted by Kasey Fleisher Hickey on 21 Oct 2011 Comment Note Links are a new-ish feature we introduced that’s been talked about here and there on the blog. 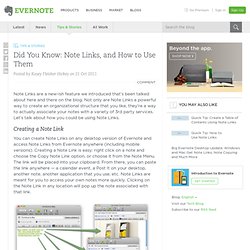 6 Apps You Should Be Using with Evernote. Mashable calls it a second brain, Evernote is a powerful productivity app that, I believe, every teacher should be using. 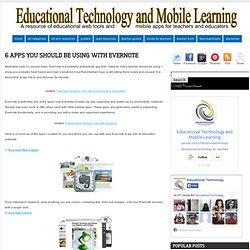 I know you probably have heard and read a lot about it but that elephant logo is still sitting there lonely and unused. It is about time to tap into to and discover its marvels. Evernote is definitely one of the apps I use everyday. It helps me stay organized and scales up my productivity. However, the app has even more to offer when used with other partner apps. 1- Evernote Web Clipper From interests to research, save anything you see online—including text, links and images—into your Evernote account with a single click. 2- Evernote Clearly Clearly makes blog posts, articles and webpages clean and easy to read.

Enrich Your Notes - Add Attachments to Evernote For iPhone, iPad [iOS Tips. Christmas is right around the corner whether you’re ready or not. 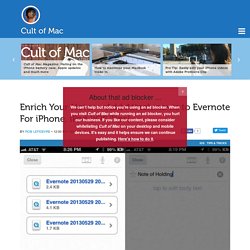 If you’re anything like us, procrastination is also one of the biggest hallmarks of the holidays. We’re here to with our gift guide liveblog that will be updated from now until Santa starts dropping through chimneys, brining you the best gifts ideas so you can get back to procrastinating on more important things. Whether you’re looking for something for a friend, spouse, significant other, or just your dog, we’ve got a little something for everyone.