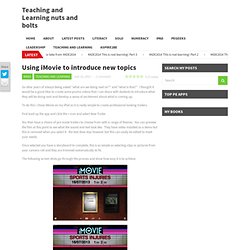 And “what is that?” I thought it would be a good idea to create some promo videos that I can share with students to introduce what they will be doing next and develop a sense of excitement about what is coming up. To do this i chose iMovie on my iPad as it is really simple to create professional looking trailers. First load up the app and click the + icon and select New Trailer.

How To 'App Smash' And Implement Digital Storytelling On The iPad. App smashing, the process of using more than one apps in conjunction with one another to create a final product, is a concept that allows students to create engaging educational projects and illustrate their creativity in multifaceted ways. 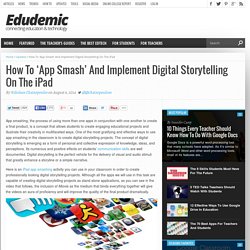 One of the most gratifying and effective ways to use app smashing in the classroom is to create digital storytelling projects. The concept of digital storytelling is emerging as a form of personal and collective expression of knowledge, ideas, and perceptions. Its numerous and positive effects on students’ communication skills are well documented. How to Do Stop Motion Videos on iPads. The Popularity of Stop Motion Effects Stop motion movies date back to the early 20th century, but they have seen a resurgence of late with popular releases like Wallace and Gromit, Chicken Run, Coraline and Frankenweenie topping box offices around the world. 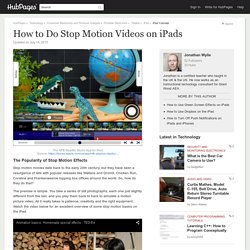 So, how do they do that? The premise is simple. You take a series of still photographs, each one just slightly different from the last, and you play them back to back to simulate a motion picture video. All it really takes is patience, creativity and the right equipment. Intro Designer for iPad: Free iMovie Video Effects on iOS. iMovie has a number of built-in themes that can be customized to give you some professional looking videos with great titles, transitions and effects. 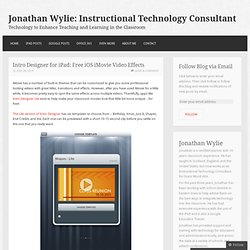 However, after you have used iMovie for a little while, it becomes pretty easy to spot the same effects across multiple videos. Thankfully, apps like Intro Designer Lite exist to help make your classroom movies look that little bit more unique…for free! The Lite version of Intro Designer has six templates to choose from – Birthday, Xmas, Just It, Shapes, End Credits and Ink. iMovie for iPad – Storyboard help sheets for trailers. iMovie for iPad – Storyboard help sheets for trailers Saturday, 30 June 2012 16:13 Written by Tim CC Jonathan Kos-Read via Compfight I did a quick search, delving a few pages deep in the results, but couldn’t find what I wanted. 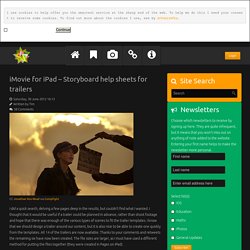 I thought that it would be useful if a trailer could be planned in advance, rather than shoot footage and hope that there was enough of the various types of scenes to fit the trailer templates. 5 Best Paid Apps for Students' iPads. “Play, design, and share sorting, labeling, and matching puzzles. 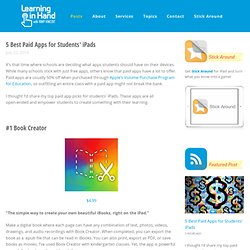 " Turn what you know into a game using Stick Around. It’s built using the same engine as Explain Everything and can import and export to that app. To create a project, students design a background, which can be a drawing or photo. Then they add stickers, which can be text, photos, or drawings. 22 Apps To Make Videos In The Classroom. 22 Of The Best Apps To Make Videos In The Classroom by TeachThought Staff In education, perhaps one of the least utilized talents of iOS hardware is creating exceptional video. 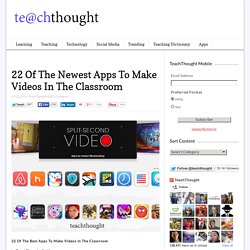 While it’s not uncommon for teachers and students to use iPads to create videos, creating stunning videos that are compelling, well-produced, innovative, truly social, and/or something worth sharing with the world isn’t so easy. Truth be told, that’s less about the technology and more a matter of teaching, learning, and planning–who is creating the video, why are they creating it, and who are they creating it for. Audience, purpose, and design. Sra. Spanglish: Three Apps, Three Types of Movie Projects. A quality five-minute movie project will suck weeks away from your class time, if done right. 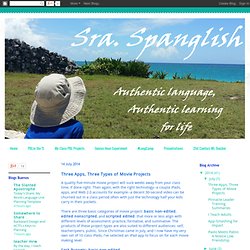 Then again, with the right technology--a coupla iPads, apps, and Web 2.0 accounts for example--a decent 30-second video can be churned out in a class period often with just the technology half your kids carry in their pockets. There are three basic categories of movie project: basic non-edited, edited nonscripted, and scripted edited. that more or less align with different levels of assessment: practice, formative, and summative. The products of these project types are also suited to different audiences: self, teacher/peers, public. Since Christmas came in July, and I now have my very own set of 10 class iPads, I've selected an iPad app to focus on for each movie making level. How to Combine Tellagami Clips in iMovie. How to Do Stop Motion Videos on iPads. 10 tasks every iPad classroom should be able to do. The Educational and Mobile Learning site highlighted a great step by step iPad task tutorial by the folks over at iSupport. 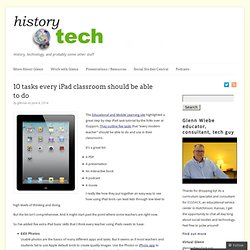 Using Pic Collage as a Mini Yearbook. I have 2 blogs that I try to post to each day – this one and a class blog. 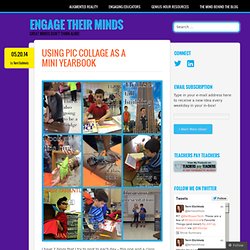 My goal for this year was to have the students take over the class blog posts, but that was only partially successful and will be part of my Epic Fails for the Year series in the near future. Part 2 of that particular Epic Fail was getting people to actually read the class blog. As far as I can tell, only a sprinkling of parents read the posts. But a few did seem to appreciate them so I trudged on. I included a lot of pictures throughout the year on the class blog. Add Interactive Elements to Videos With TouchCast. This is guest post from ETT Summit presenter Sabba Quidwai (@askmsq) first appeared on Free Technology for Teachers.

EdTechTeacher.org is an advertiser on this blog. At the top of my list these days is an app called TouchCast. How many times have you watched a video where they point out a great resource only to say that you’ll come back to it later and never do? Or, have you ever shared a great resource and wanted to provide a variety of links for someone to choose from to extend their knowledge? Apple Distinguished Educators choose Book Creator as their 'One Best Thing' - Book Creator app. Apple recently asked 102 of their ADEs to share their best practices, ideas and projects for a collection of multi-touch books to be published for free on iTunes. The One Best Thing section in the iBooks Store is a collection of all these books, divided into categories, including ‘Content Creation in the Classroom’ among others. When we had a closer look at some of the ideas that had been shared, we were humbled to see how many people had chosen to say something about Book Creator for iPad.

Special thanks to these people below (and if we’ve missed anyone out, do let us know!) Jane Ross Jane Ross is an Apple Distinguished Educator and Technology Coach teaching in Asia. 4 compelling ideas for using Book Creator in the classroom - Book Creator app. Technology Coach Chris Loat shares his ideas on how Book Creator can be used effectively in the classroom. Chris Loat has taught for 16 years between grades 2-7, and recently moved to the district board office in Richmond, Canada, as a teacher consultant for the integration of technology. Book Creator is a versatile and intuitively set-up app that allows students to easily create digital content in a variety of ways. In Richmond, teachers have used their iPads and Book Creator to publish ebooks on a variety of topics and in a variety of genres. Below are some ideas for using Book Creator in your classroom. 1. Top iPad Apps for Student Creativity.

My school is currently 1:1 iPads in Grades 1, 4, and 5, and next year we're expanding that to include Grades 2 and 3. Like most schools, we went through a phase where we tried out LOTS of different apps, but over time, we whittled those down into our Core Apps, ones that are flexible and powerful enough to be used in every subject all day long. One of the keys for me is that these apps can be used by students to CREATE things, not just consume things.

Here are our favorites: 6 Best iPad Apps for design and illustration. Major App Update! Introducing Whiteboard Clip Recording and More!!! We're super excited to share with you the new update for the eduClipper iPad app that was released today! Here are some of the amazing new features in eduClipper Version 2.2 And there's a lot more too! From new animations (which we really love), to the new caching system that will improve the overall app functionality and allow for off-line access, there are a lot of tweaks and enhancements under the hood of this new version that make it great! iMovie for iOS projects no longer work on the Mac (for now) 30 iPad Apps for Music Teachers. Education App – WriteRight for iPad. The New and Improved iMovie for iPad [TUTORIAL] Pic Collage - More than just making posters! ProTuber for YouTube [free] – Save YouTube Videos to Camera Roll!

**Update November 2013! Looks like this app has been pulled from the App Store. If you were able to download it, do NOT update! Grab this app while you can! ProTuber (free, universal) allows you to download YouTube videos onto your Camera Roll. This is a feature that I have discussed during my reviews of TubeBox (App since removed) and Instatube (still available). Like TubeBox, downloading videos for offline viewing gives many benefits. ProTuber allows you to choose the video quality of your download (1080p, 720p etc.) Once saved within the app, you can save to your Camera Roll: Truth be told, YouTube does NOT generally like apps that are able to do this, so download it now before it gets pulled (like TubeBox did). The “lite” version is free, while the $1.99 in-app upgrade will give you unlimited downloads (not sure how many you get with the free version exactly).

95 best iPad apps for designers. We've gathered together the very best iPad apps in Apple's App Store – and many are free. You're sure to find a timelessly brilliant app that meets your needs, saving you the hassle of searching through the hundreds of thousands available. Whether you're looking to design on your iPad, carry out research, find inspiration, or improve your task management and productivity there are tons of iPad apps in our list. So here goes, in no particular order... 01. Adobe Capture CC Price: Free Packed with useful features to work alongside apps like Adobe Photoshop CC and Illustrator CC, Adobe Capture CC lets users extract colour themes from photos and convert images into vector graphics. 02.

Students can now conveniently publish podcasts directly from an iPad app. Keynote: Create Stunning Presentations on the Move. Sound Like A Virtuoso Musician With Your iPad [Feature. 7 Essential iPad Apps for Designers.