Police Body Cameras Will Do More Than Just Record You. It was a cool autumn evening in Paris in 2015, and a number of executives from the police supplier Taser International were enjoying dinner at a cafe when the shooting began. 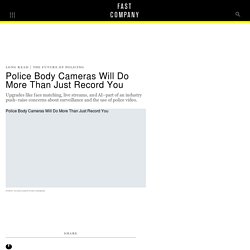 They took cover, and in the havoc, soon learned that some 150 yards away, armed men were laying siege to the Bataclan concert hall—part of a series of attacks that would turn out to be the deadliest in France since World War II. “They got caught in the middle of everything,” says Taser’s cofounder and CEO, Rick Smith, who was in the outskirts of the city at the time and stayed up until the early hours to make sure his employees were safe. Real-Time Face Recognition Threatens to Turn Cops’ Body Cameras Into Surveill... Last year, a Russian startup announced that it could scan the faces of people passing by Moscow’s thousands of CCTV cameras and pick out wanted criminals or missing persons. 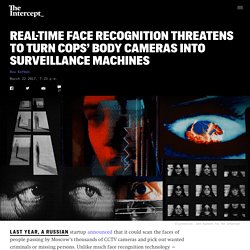 Unlike much face recognition technology — which runs stills from videos or photographs after the fact — NTechLab’s FindFace algorithm has achieved a feat that once only seemed possible in the science fictional universe of “Minority Report”: It can determine not just who someone is, but where they’ve been, where they’re going, and whether they have an outstanding warrant, immigration detainer, or unpaid traffic ticket. For years, the development of real-time face recognition has been hampered by poor video resolution, the angles of bodies in motion, and limited computing power. But as systems begin to transcend these technical barriers, they are also outpacing the development of policies to constrain them. Police see the appeal. Photo: David McNew/Getty Images A Digital Enemies List Photo: Mary Altaffer/AP. 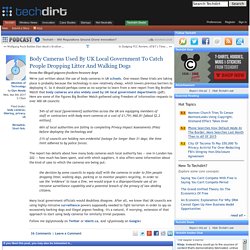 One reason these trials are taking place is probably because the technology is now relatively cheap, which lowers previous barriers to deploying it. So it should perhaps come as no surprise to learn from a new report from Big Brother Watch that body cameras are also widely used by UK local government departments (pdf). Here are some of the figures Big Brother Watch gathered using Freedom of Information requests to over 400 UK councils: 54% of all local [government] authorities across the UK are equipping members of staff or contractors with body worn cameras at a cost of £1,791,960.81 [about $2.2 million]. 66% of local authorities are failing to completing Privacy Impact Assessments (PIAs) before deploying the technology and 21% of councils are holding non-evidential footage for longer than 31 days; the time limit adhered to by police forces.

Many local government officials would doubtless disagree. Www.telegraph.co. Wearable Cameras Move Beyond Sports to the Mainstream. A tiny camcorder called the Looxcie, left, loops over the ear Ronda Churchill/Bloomberg News A GoPro camera was worn at the International Consumer Electronics Show in Las Vegas. 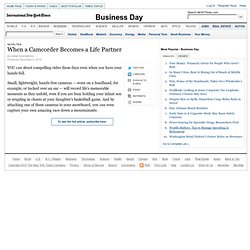 Small, lightweight, hands-free cameras — worn on a headband, for example, or tucked over an ear — will record life’s memorable moments as they unfold, even if you are busy holding your infant son or erupting in cheers at your daughter’s basketball game. And by attaching one of these cameras to your snowboard, you can even capture your own amazing race down a mountainside. Cameras worn on helmets or harnesses have been popular during the last decade for specialized uses like skydiving or auto racing. The cameras are likely to be very popular for both business and recreational use, said Jonathan Zittrain, a law professor at Law School and a co-founder of the Berkman Center for Internet and Society. “We usually learn about them when we see the videos on or on CNN,” he said. 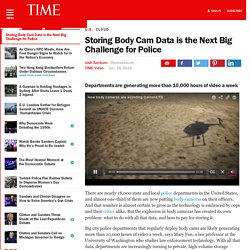 And that number is almost certain to grow as the technology is embraced by cops and their critics alike. But the explosion in body cameras has created its own problem: what to do with all that data, and how to pay for storing it. Big city police departments that regularly deploy body cams are likely generating more than 10,000 hours of video a week, says Mary Fan, a law professor at the University of Washington who studies law enforcement technology. With all that data, departments are increasingly turning to private, high-volume storage businesses like VERIPATROL, a cloud-based service owned by body cam maker Vievu, and evidence.com, a similar service owned by competitor TASER International.

Read more: Los Angeles Police to Launch Largest Body Cam Program in U.S. For these companies, storage is becoming big business. CPDP 2016: A new surveillance revolution: Body worn cameras and public services. Why police are pushing back on body cameras. New York — Scrutinized as never before, police officers across the nation are beginning to push back and demand greater respect for their on-the-job privacy. 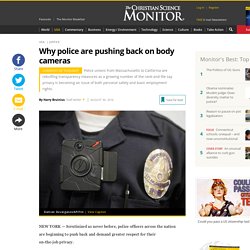 From bystanders’ smartphones to the body cameras being clipped to officers’ lapels, digital technology has in many ways upended the relationship between police officers and the communities they serve. Dozens of videos, of course, have helped fuel long-simmering tensions between many minority communities and the police – a crucial factor in the emergence of the Black Lives Matter movement, many criminal justice experts say.

They have also contributed to current widespread calls to have police officers record their interactions with the public with the new technology of body cameras. “I think more often than not, body cameras will exonerate law enforcement officers,” Dr. How the police's body-worn camera technology is changing the justice system. Just before 10am on a rainy Thursday in southeast London, a small group of men gather in a pokey corridor inside Bexley magistrates court to await their punishment. 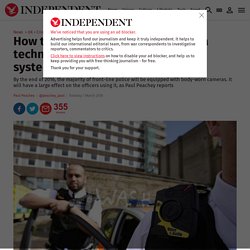 They don't chat much and they have little in common – one is in his 70s, another is a self-employed T-shirt seller, while a third is just out of prison – but they share the status of convicted domestic abusers. As they trail one by one into court for a morning of sentencing, common themes emerge: alcohol, anger and then remorse and sometimes a promise that it will never happen again.

But a major change in the working of the criminal justice system only becomes obvious when Karl Langridge, 41, takes his turn. He accepts that he had too much to drink in the pub before heading to the home of his business partner and brief short-term partner. Police Body Camera Use. At a time when police across the U.S. are being watched warily by the citizens they serve, many departments are embracing wearable cameras to document their interactions with the public. 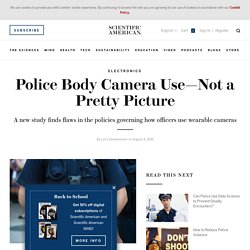 Police and rights activists alike had hoped recording incidents on patrol would help discourage violence against officers as well as increase transparency in how police treat citizens. But a report released this week questions how much law enforcement agencies are telling the public about the use of the cameras—and the footage they collect.

The latest body-worn camera scorecard from the The Leadership Conference on Civil and Human Rights, working with technology and policy consulting firm Upturn, examined 50 U.S. police departments and pronounced them lacking in most of the study’s eight criteria. Research on Body-Worn Cameras and Law Enforcement. On this page find: Overview of Body-Worn Camera Use by Law Enforcement. 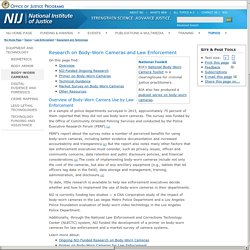 Study Links Police Bodycams to Increase in Shooting Deaths - Law Blog. In the wake of high-profile police shootings, the Obama administration has encouraged local police departments to equip their officers with body-worn cameras. 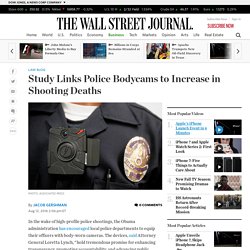 The devices, said Attorney General Loretta Lynch, “hold tremendous promise for enhancing transparency, promoting accountability, and advancing public safety.” A new study by Temple University researchers, however, suggests that the wearable video cameras may not lead to fewer police shootings of civilians, but may actually make officers more likely to use lethal force.