Www.cosmopolitan. If you've been on any site that sells sex toys in the past year, you've probably seen a cropping of fancy new "smart" sex toys that use Bluetooth. 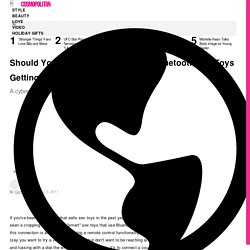 Sometimes this connection is as simple as adding a remote control functionality to a toy (say you want to try a vibrating butt plug but don't want to be reaching around and fussing with a dial the whole time). Consent in the age of big data and connected sex toys. Des sextoys sèment la panique sur le Vieux-Port de Marseille. Vendor Best Practices. Work in progress As a producer of IoD devices, your company is responsible for the safety of your products. 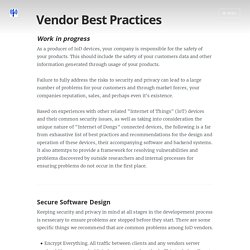 This should include the safety of your customers data and other information generated through usage of your products. Failure to fully address the risks to security and privacy can lead to a large number of problems for your customers and through market forces, your companies reputation, sales, and perhaps even it's existence. Based on experiences with other related "Internet of Things" (IoT) devices and their common security issues, as well as taking into consideration the unique nature of "Internet of Dongs" connected devices, the following is a far from exhaustive list of best practices and recommendations for the design and operation of these devices, their accompanying software and backend systems. Secure Software Design Keeping security and privacy in mind at all stages in the developement process is nessecary to ensure problems are stopped before they start. Smart sex toy's security flaws fulfil every hacker's fantasy. 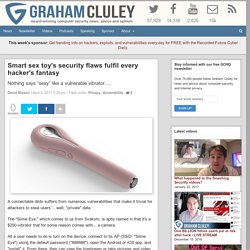 The "Siime Eye," which comes to us from Svakom, is aptly named in that it's a $250-vibrator that for some reason comes with... a camera. All a user needs to do is turn on the device, connect to its AP (SSID: "Siime Eye") using the default password ("888888"), open the Android or iOS app, and "install" it. From there, they can view the livestream or take pictures and video. 240568-objets-connectes-les-victimes-dun-vibromasseur-espion-remportent-leur-... La société canadienne Standard Innovation, accusée par sa clientèle d'avoir omis de révéler que son sex-toy phare collectait leurs données personnelles, a été condamnée à leur payer 3 millions de dollars et à supprimer ces informations. 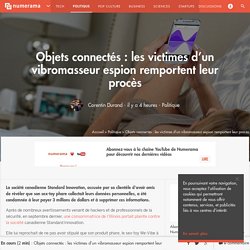 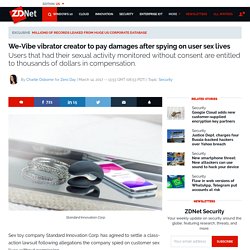 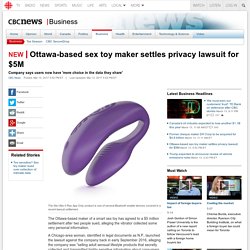 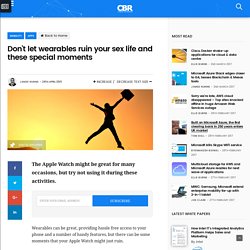 Wearables can be great, providing hassle free access to your phone and a number of handy features, but there can be some moments that your Apple Watch might just ruin. CBR has compiled a handy list of times when it’s probably for the best that you aren’t wearing the device. 1. Sex If your Apple Watch battery lasts long enough for you to wear it through the night, then you might find that the fitness and health tracking features to be a bit of a turn off. 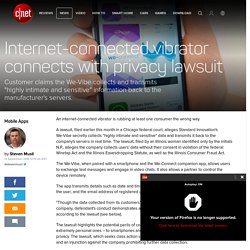 A lawsuit, filed earlier this month in a Chicago federal court, alleges Standard Innovation's We-Vibe secretly collects "highly intimate and sensitive" data and transmits it back to the company's servers in real time. The lawsuit, filed by an Illinois woman identified only by the initials N.P., alleges the company collects users' data without their consent in violation of the federal Wiretap Act and the Illinois Eavesdropping Statute, as well as the Illinois Consumer Fraud Act. The We-Vibe, when paired with a smartphone and the We-Connect companion app, allows users to exchange text messages and engage in video chats. It also allows a partner to control the device remotely. The app transmits details such as date and time of each use, the intensity and mode chosen by the user, and the email address of registered users, according to the lawsuit. N.P. v. 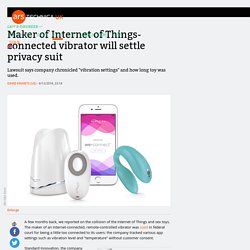 Hyundai is getting into the business of producing exoskeletons, claiming that it can make Iron Man-like suits much less expensive than other exoskeleton brands priced between $80,000 and $40,000. The H-Mex model in particular is meant to give paraplegics a way to walk, so hopefully Hyundai’s exoskeletons will be downright cheap; then it might be able to accomplish the goal of helping people walk by being affordable for folks on very limited budgets who need it. The crutches used along with the robot-legs have controls like a game controller. Engadget explained, “One button would move the left leg forward, and the other would move the right.

Two Sex Tracking Wearables That Might Actually Make It to Market. Lovely - The smart wearable sex toy for couples. Smart condom ring i.Con is like a Fitbit for your man bits - CNET. The i.Con Smart Condom, which markets itself as the "world's first smart condom," is actually a ring that fits over a boring, dumb condom and claims to track the exercise of your man bits, as well as detect chlamydia and syphilis.

The ring, first announced last July, is currently available for preorder on British Condoms for £59.99 (about $74, AU$97) with an unknown release date.