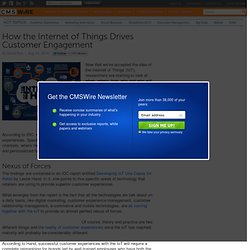 They're also looking into potential risks. Recent research from IDC, for example, shows that retailers are leading the charge to the IoT in the quest for better customer experiences. According to IDC, retailers see the IoT as a way to improve customer experiences. Specifically, they are using it to pull consumers into one of their channels, where they will entice them with products that have been contextualized and personalized for the customers’ gratification.

Nexus of Forces The findings are contained in an IDC report entitled Developing IoT Use Cases for Retail by Leslie Hand. One network, A billion dreams - SigFox - Cisco Firefox. Why You Should Compete at the IoT Olympiad. Whether you are an expert in your field or looking to expand your skills, the IoT Olympiad will provide you with the opportunity to get under the hood of Enterprise-class IoT platform services and possibly win an Occulus Rift V1 dev kit. 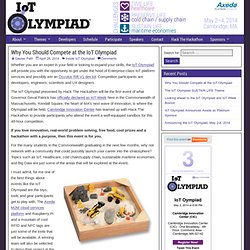 Competition participants are developers, engineers, scientists and UX designers. Seniors And The Internet Of Things: Empowerment And Security. I was quoted extensively in a Sunday Boston Globe feature on the IoT. 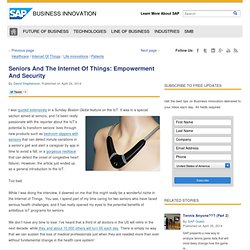 It was in a special section aimed at seniors, and I’d been really passionate with the reporter about the IoT’s potential to transform seniors’ lives through new products such as bedroom slippers with sensors that can detect minute variations in a senior’s gait and alert a caregiver by app in time to avoid a fall, or a gorgeous necklace that can detect the onset of congestive heart failure). However, the article just ended up as a general introduction to the IoT. Too bad. While I was doing the interview, it dawned on me that this might really be a wonderful niche in the Internet of Things. We don’t have any time to lose: I’ve heard that a third of all doctors in the US will retire in the next decade, while they and about 10,000 others will turn 65 each day.

Let’s also not forget about the benefits to seniors living alone and their families living miles away, of smart home devices. Let’s go! Industrie 4.0 and Industrial Internet of Things at the Hanover Fair - ARC Helps Clients Get Value from Technology. Edit in Dashboard Designer /_layouts/images/ppsEditDesigner.png {SiteUrl}/_layouts/ppswebparts/DesignerRedirect.aspx? 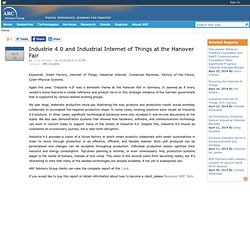 Operation=OpenItem&ItemLocation={ItemUrl} How Broadcom is trying to figure out the Internet of Things. BUSINESS JOURNAL PHOTO | Marcus R. 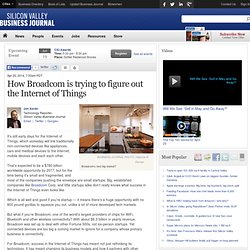 Donner Broadcom's next big market? IoT and M2M Market Size to Swell Close to USD500 billion by 2019 with Widespread Adoption Across Consumer and Industrial Applications. How to make the most of the Internet of Things. David Cameron's announcement of an extra £45 million to develop the Internet of Things is great news – that's £73 million that the UK has earmarked in funding research in this space. 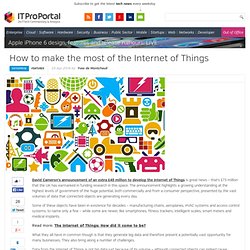 The announcement highlights a growing understanding at the highest levels of government of the huge potential, both commercially and from a consumer perspective, presented by the vast volumes of data that connected objects are generating every day. Some of these objects have been in existence for decades – manufacturing chains, aeroplanes, HVAC systems and access control systems, to name only a few – while some are newer, like smartphones, fitness trackers, intelligent scales, smart meters and medical implants. Read more: The Internet of Things: How did it come to be? What they all have in common though is that they generate big data and therefore present a potentially vast opportunity for many businesses. They also bring along a number of challenges. Managing use cases. How to Mine Gold from the Internet of Things.

The Internet of Things (IoT) has been an idea at the edge of market disruption for some time now, and a lot of companies are jumping into the game. 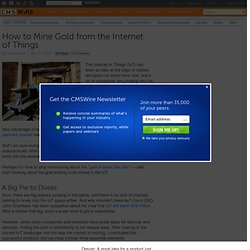 Google acquired Nest to elbow its way into the smart home market. Samsung is pumping out smart watches at breakneck speed to stake its claim on the wearable tech market. Companies are jockeying to take advantage of technologies like iBeacon in the retail space, and a new NFC payment system seems to pop up in tech news each week. And I am sure everyone has seen the weekly rumors about Apple's unconfirmed, unannounced, often speculated smart watch, which is supposed to be its own entry into the wearable market. 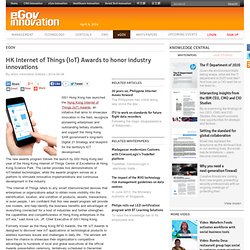 The center provides live demonstrations of IoT-related technologies, while the awards program serves as a platform to stimulate innovative implementations and continuous development in the industry. “The Internet of Things refers to any smart interconnected devices that enterprises or organizations adopt to obtain more visibility into the identification, location, and condition of products, assets, transactions, or even people.

I am confident that this new award program will provide role models, and help identify the business benefits and advantages of 'everything connected' for a host of industries and further strengthen the capabilities and competitiveness of Hong Kong enterprises in the IoT era,” said Anna Lin, JP, Chief Executive of GS1 Hong Kong. 7 weird applications for the Internet of Things - TechOnline India - Embedded Software & Systems Industry News. The Internet of Things (IoT) involves a lot of technologies that provide it with immense potential. 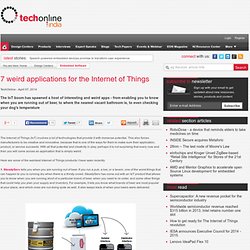 This also forces manufacturers to be creative and innovative, because that is one of the ways for them to make sure their application, product, or service succeeds. With all that potential and creativity in play, perhaps it is not surprising that every now and then you will come across an application that is simply weird. Internet of Things Enables $3.88 Trillion in Potential Value to Manufacturers - IEN.eu.

Previous Internet of Things Enables $3.88 Trillion in Potential Value to Manufacturers Next. 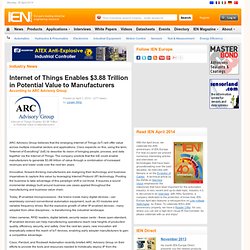 The QCA4002 and QCA4004 networking platforms include the IP stack and full networking services on the chip to enable customers to add Wi-Fi to virtually any product with minimal development effort or cost. The platforms feature an on-chip processor and memory, which are designed to eliminate the need for a system controller that adds to product cost, complexity and power consumption. Using the QCA4004, customers can now write their own applications on the Qualcomm Atheros platform instead of simply using it for Wi-Fi connectivity. Internet of Things Technology - Cisco Firefox. Mâchez, la fourchette vibrante vous surveille.

Z-Wave home automation solutions. Smart Home Control - Rule creator. Home Automation Systems Store. Embedded Automation, Inc. - Front Page. Smart Citizen Kit. The Smart Citizen Project Welcome! The Smart Citizen Project is a collaborative, international effort to deploy a distributed network of citizen-collected data, with the goal of monitoring the environment around us. Hover around each image to find out more! An Open-Source environmental monitoring platform. It comprises a hardware device that can be placed on your balcony or windowsill, an online platform where you can visualize, log, or share your data, and a mobile app. Energizing the Wireless World. IoT Works. Company - Your Partner for Open Standards based Middleware since 1997.

ProSyst is a software vendor, offering the middleware for the Internet of Things. Our roots are in the field of Java, OSGi and embedded software. In general, the company is entirely focused on open standards technology and open and neutral software platforms for service providers and device manufacturers to deploy apps and services. ProSyst provides the most advanced cloud-based open standards based middleware for managing connected products and implementing innovative M2M applications.

We take the cost and complexity out of connecting and remotely servicing the products of the world’s leading device manufacturers and service providers. Service providers, product manufacturers and consumer channel partners across the globe use our solutions to foster deeper consumer relationships, differentiate their products, achieve business objectives and drive increased value over the lifetime of the consumer. The company was founded in 1997.

JustShareIt - Borrow your neighbor's ride or rent out yours. The easiest way to make money sharing the things you own and save money borrowing the things you don't. Internetofthings2.jpg (JPEG Image, 2000 × 1500 pixels) - Scaled (54%) - Cisco Firefox. Www.nickhunn.com/wp-content/uploads/downloads/2013/03/to-ubiquity-and-beyond.pdf. Beacons — real world context for your apps. Home of the ION Air Pro - One of the lightest HD action cameras on the market.

Technicolor presents QEO. The Fast Track to the Internet of Everything - AllJoyn. Sensor PlatformsSensor Platforms. Xanboo. MQTT. RabbitMQ - Messaging that just works - Cisco Firefox. Enabling the Internet of Things. The XMPP Standards Foundation. Advancing open standards for the information society. NewAer. Get Started with Ayla. Weightless SIG for M2M and Internet of Things IOT. Neul - the Internet of Everything. Weightless technology - small is dutiful. How do you develop a standard that meets the need for thousands - maybe millions - of devices to connect without human intervention? Welcome to the ‘Weightless’ world. When machine-to-machine (M2M) connectivity problems are discussed there tend to be two responses: one is to note that there have been predictions of inter-machine connectivity for years and the fact that the technology has failed to deliver on them suggests that an inherent impracticality exists that technology cannot overcome.

The second, more positive response is to say that cellular transmission systems can handle it all, but that they will need major reinvestment along with backhaul support from other communications infrastructure. There are many possible M2M applications. The Internet of Things Real-Time Web Service and Applications - Pachube. Tracking the Internet of Things. Making your world smarter. Securing the Internet of Things - Embedded SSH, Embedded SSL, Embedded IPSEC and OpenSSH/OpenSSL Alternatives, FIPS Validated Crypto, FIPS Validation, FIPS 140-2 Validated, FIPS 140-2 Validation, FIPS Approved, FIPS certified, FIPS certification, FIPS 140.

Announces LynxOS 7.0 with new Security Features to Protect Embedded Connected Devices. As more embedded devices connect to the Internet and each other, LynxOS 7.0 meets the increasing security requirements for real-time operating systems SAN JOSÉ, CA—June 5, 2013—LynuxWorks™, Inc, a world leader in the embedded software market, today announced LynxOS® 7.0, the next generation of their most popular real-time operating system (RTOS) enabling embedded developers to add security functionality to their connected devices. Supermechanical : Twine - Listen to your world, talk to the Internet. Twine : Listen to your world, talk to the Internet by Supermechanical. The Kickstarter is over, but if you missed out on backing us, not to worry. Lumn: You wait ages, then two bandwagons come at once. Labs' Central Nervous System for the Earth project aims to build a planetwide sensing network: HP Labs Feature Article (November 2009)

In the first commercial application of CeNSE technology, HP and Shell will build a wireless sensing system to acquire high-resolution seismic data.

Broadband for Everyone. Quantified Self Forums. Smart locks.