Connected Objects Pushing Company Bosses to Rethink their Firms’ DNA. The relationship between products and customers is changing. 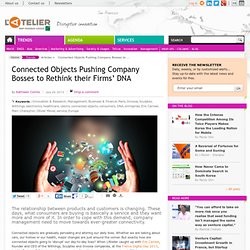 These days, what consumers are buying is basically a service and they want more and more of it. In order to cope with this demand, company management need to move towards ever-greater connectivity. Connected objects are gradually pervading and altering our daily lives. Whether we are talking about cars, our homes or our health, major changes are just around the corner. But exactly how are connected objects going to ‘disrupt’ our day-to-day lives? Internet of Things economic value add will be $1.9 trillion in 2020: Gartner. Internet of Things economic value addition will be $1.9 trillion in 2020, benefiting a range of industries such as healthcare, retail and transportation, said Gartner. 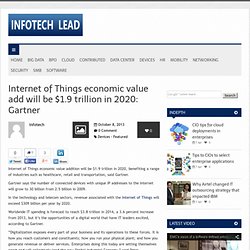 Gartner says the number of connected devices with unique IP addresses to the Internet will grow to 30 billion from 2.5 billion in 2009. In the technology and telecom sectors, revenue associated with the Internet of Things will exceed $309 billion per year by 2020. Worldwide IT spending is forecast to reach $3.8 trillion in 2014, a 3.6 percent increase from 2013, but it’s the opportunities of a digital world that have IT leaders excited, according to Gartner. “Digitalization exposes every part of your business and its operations to these forces. It is how you reach customers and constituents; how you run your physical plant; and how you generate revenue or deliver services.

The business benefits of machine to machine. Machine to machine (M2M), the automated communication of data between connected devices, has begun to increasingly capture the attention of CIOs across the globe. 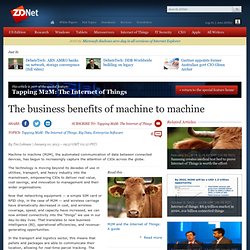 The technology is moving beyond its decades of use in utilities, transport, and heavy industry into the mainstream, empowering CIOs to deliver real value, cost savings, and innovation to management and their wider organisations. Now that networking equipment — a simple SIM card or RFID chip, in the case of M2M — and wireless carriage have dramatically decreased in cost, and wireless coverage, speed, and capacity have increased, we can now embed connectivity into the "things" we use in our day-to-day lives. Internet of things: $8.9 trillion market in 2020, 212 billion connected things. The Internet of things and the technology ecosystem surrounding it are expected to be a $8.9 trillion market in 2020, according to IDC. 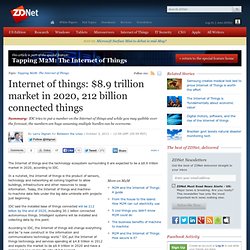 In a nutshell, the Internet of things is the product of sensors, technology and networking all coming together to allow buildings, infrastructure and other resources to swap information. Today, the Internet of things and machine-to-machine data falls under the big data umbrella with projects just beginning. IDC said the installed base of things connected will be 212 billion by the end of 2020, including 30.1 billion connected autonomous things.

Celebrating International Internet of Things Day! - Inside Scoop. Did you know that today is a holiday? 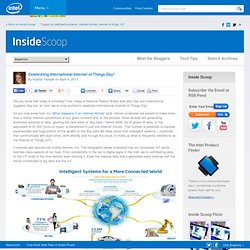 Blog — Internet of Things Consortium. The most interesting thing that I took away from the last two Apple product announcements had nothing to do with the iPhone 6 or Apple Watch. 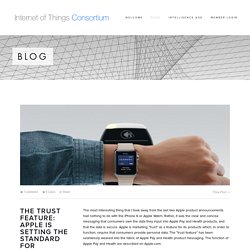 Rather, it was the clear and concise messaging that consumers own the data they input into Apple Pay and Health products, and that the data is secure. Apple is marketing “trust” as a feature for its products which, in order to function, require that consumers provide personal data. The “trust feature” has been seamlessly weaved into the fabric of Apple Pay and Health product messaging. The function of Apple Pay and Health are described on Apple.com: “With Apple Pay, instead of using your actual credit and debit card numbers when you add your card, a unique Device Account Number is assigned, encrypted, and securely stored in the Secure Element, a dedicated chip in iPhone, iPad, and Apple Watch.

The Health app lets you keep all your health and fitness information in one place on your device and under your control. Internet of things: $8.9 trillion market in 2020, 212 billion connected things. The Internet of Things is 'fundamentally about economic value' DETROIT—Self-driving vehicles, intelligent refrigerators, stoke-detecting gadgets that everyone wears: the idea of an "Internet of Things" is all the rage in the technology industry today. 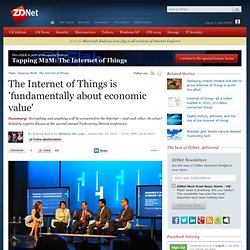 But what does it really mean? And is there substance beneath all that hype? That was the topic of discussion during Tuesday's Techonomy Detroit conference, at which experts from the technology, automotove, agriculture and political sectors gathered to debate how this concept will affect their businesses—and ultimately, the U.S. economy. First, a definition. The "Internet of Things," a term coined in 1999 by technologist Kevin Ashton, describes a world in which everything—from a living, breathing you to the inanimate objects around you—has a digital identity, to enable computers to organize and manage them. Is it possible to quantify the potential of the Internet of Things? Sounds great—but in a place like Detroit, still the premier hub for the U.S. automotive industry, how does that translate? See also: