The "server/incorporation" terminology has its roots in the Perfect 10 ruling where the Ninth Circuit had to decide whether there was infringement of the display right where the defendant (Google) did not actually serve the copyrighted image but merely framed it in such a way that the end user may have gotten the impression that Google was displaying it (despite the fact that the actual bits were being served by a third-party site). 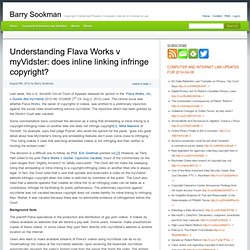 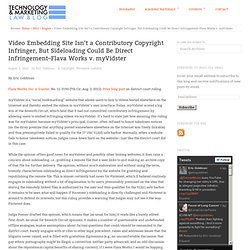 Gunter, No. 11-3190 (7th Cir. Aug. 2, 2012). Prior blog post on district court ruling. myVidster is a “social bookmarking” website that allows users to link to videos hosted elsewhere on the Internet and thereby embed the videos in myVidster’s user interface. While the opinion offers good news for myVidster and possibly other linking websites, it does raise a concern about sideloading, i.e., grabbing a remote file that a user links to and making an archive copy of that file for further delivery. Judge Posner drafted this opinion, which means that (as usual for him) it reads like a barely edited first-draft. The main ruling is that the folks uploading infringing videos are direct infringers, but myVidster isn’t contributorily liable for letting users link to those infringing videos.

Judge Posner: Embedding Infringing Videos Is Not Copyright Infringement, And Neither Is Watching Them. Recently we've seen a number of cases, both civil and criminal, brought against websites that involve either links or embeds of videos hosted elsewhere. 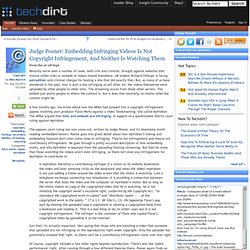 UK student Richard O'Dwyer is facing extradition and criminal charges for hosting a site that did exactly that. But, as many of us have wondered in the past, how is such a site infringing at all? After all, the videos themselves were uploaded by other people to other sites. The streaming occurs from those other servers. The embed just points people to where the content is, but it does that neutrally, no matter what the content might be.

MyVidster: A Victory for Innovation and a Vote for Sensible Copyright Law. Last week, the Seventh Circuit Court of Appeals issued an opinion in Flava Works v. myVidster, a case that raises questions about embedded videos and copyright infringement. 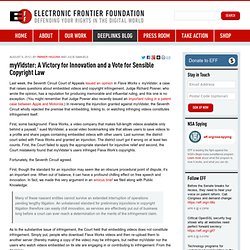 Judge Richard Posner, who wrote the opinion, has a reputation for producing memorable and influential ruling, and this one is no exception. (You might remember that Judge Posner also recently issued an important ruling in a patent case between Apple and Motorola.) Flava Works v Gunter: Injunction Vacated. The headlines heralding a Seventh Circuit decision in Flava Works v. 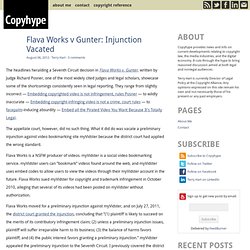 Gunter, written by Judge Richard Posner, one of the most widely cited judges and legal scholars, showcase some of the shortcomings consistently seen in legal reporting. They range from slightly incorrect — Embedding copyrighted video is not infringement, rules Posner — to wildly inaccurate — Embedding copyright-infringing video is not a crime, court rules — to facepalm-inducing absurdity — Embed all the Pirated Video You Want Because It’s Totally Legal. The appellate court, however, did no such thing. What it did do was vacate a preliminary injunction against video bookmarking site myVidster because the district court had applied the wrong standard. More on linking: the US says linking to infringing content is ok. Further to the recent Canadian decision saying that linking to legally uploaded photographs is not an infringement, a decisionwas handed down in the US yesterday which says that it is not an infringement to embed a copyright-infringing video on another website (Case 113190). 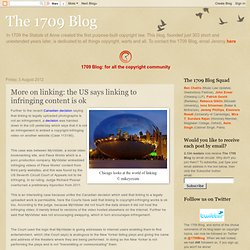 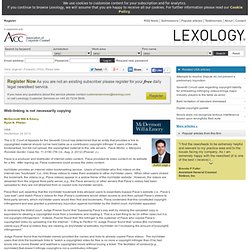 Court of Appeals for the Seventh Circuit has determined that an entity that provides a link to copyrighted material should not be held liable as a contributory copyright infringer if users of the site bookmarked, but did not upload, the copyrighted material to the site servers. Flava Works v. Marques Rondale Gunter, Case No. 11-3190 (7th Cir., Aug. 2, 2012) (Posner, J.). Flava is a producer and distributer of internet video content.

Flava provided its video content on its website for a fee. MyVidster provides an internet video bookmarking service. Flava filed suit, asserting that the myVidster bookmark links allowed users to essentially bypass Flava’s website (i.e., Flava’s “pay wall”) and watch Flava’s videos for free (Flava’s customers would obtain access to and then upload Flava’s videos to third-party servers, which myVidster users would then find and bookmark). Judge Posner found that myVidster merely provided the names and links to already copied Flava videos. American Server and French Incorporation. American server French corporation With the Seventh Circuit's ruling in Flava Works, we now have a clear divergence between US and French copyright law in relation to the "server" approach and the "incorporation" approach for assessing infringement of the public performance/display right. 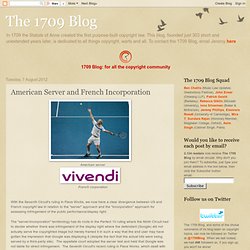