All the topics I and other consider interesting and we all should know about. Join us keep the world informed!!!

Perseid Meteor Shower 2012: Shooting Stars Saturday and Sunday Night; Crescent Moon Helps Seeing. <br/><a href=" US News</a> | <a href=" Business News</a> Copy Go outside in the wee hours of Sunday morning and, if the night sky is clear, you may see exquisite showers. 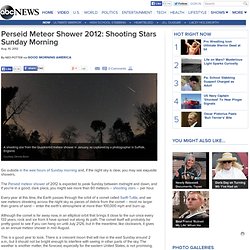 Photos: 8 Moon-Landing Hoax Myths. Erin Hamlin. Erin Mullady[1] Hamlin (born 19 November 1986) is a three-time Olympian[2] and the first female American luger to medal at any Winter Olympics, as well as the first American of either gender to medal in singles competition.[3][4] She took the singles bronze medal in Sochi's 2014 Winter Olympics, something the Associated Press called "a feat that will surely go down as perhaps the greatest moment in USA Luge history".[5] Having opened her luging career in 2005, her first major international victory was the gold medal in the women's singles event at the 2009 FIL World Luge Championships in Lake Placid, New York. 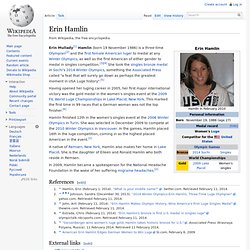 This marked the first time in 99 races that a German woman was not the top finisher.[6] Hamlin finished 12th in the women's singles event at the 2006 Winter Olympics in Turin. She was selected in December 2009 to compete at the 2010 Winter Olympics in Vancouver. In the games, Hamlin placed 16th in the luge competition, coming in as the highest placed American in the event.[2] Arvind Kejriwal asks for criminal case against Mukesh Ambani over gas prices. All India | Edited by Prasad Sanyal | Updated: February 11, 2014 19:06 IST Delhi Chief Minister ,Arvind Kejriwal (R) delivers a statement as Minister for Education, PWD and Urban Development, Manish Sisodia looks on during a press conference in New Delhi on February 11, 2014. 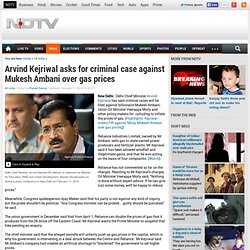 New Delhi: Delhi Chief Minister Arvind Kejriwal has said criminal cases will be filed against billionaire Mukesh Ambani, Union Oil Minister Veerappa Moily and other policy-makers for colluding to inflate the prices of gas. (Highlights: Kejriwal orders FIR against Moily, Mukesh Ambani over gas pricing) Reliance Industries Limited, owned by Mr Ambani, sells gas to state-owned power producers and fertilizer plants. Mr Kejriwal said it has been allowed windfall and illegitimate gains, and that he was acting on the basis of four complaints. Reliance has not commented so far on the charges. DeVernon LeGrand. The Rev. 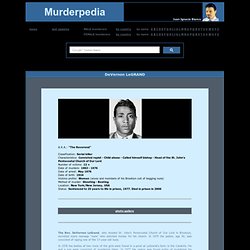 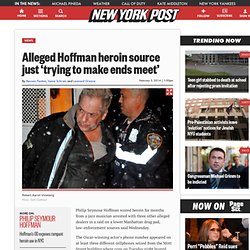 The Oscar-winning actor’s phone number appeared on at least three different cellphones seized from the Mott Street building where cops on Tuesday night busted alleged dealer Robert Vineberg, 57, the sources said. The tip that led to the raid came from a known heroin user, who proved his credibility to investigators because he, too, had Hoffman’s cellphone number. Cops also arrested Thomas Kushman, 48, Max Rosenblum, 22, and Juliana Luchkiw, 22. Vineberg and Kushman were charged with felony criminal possession of a controlled substance, sources said. Fugitive found in California 37 years after escape. SAN DIEGO (AP) — A woman who escaped from a Michigan prison nearly 37 years ago while serving time for attempted larceny was found living under an alias in San Diego, police said Tuesday. 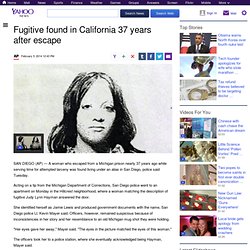 Acting on a tip from the Michigan Department of Corrections, San Diego police went to an apartment on Monday in the Hillcrest neighborhood, where a woman matching the description of fugitive Judy Lynn Hayman answered the door. She identified herself as Jamie Lewis and produced government documents with the name, San Diego police Lt.

Kevin Mayer said. Officers, however, remained suspicious because of inconsistencies in her story and her resemblance to an old Michigan mug shot they were holding. "Her eyes gave her away," Mayer said. The officers took her to a police station, where she eventually acknowledged being Hayman, Mayer said. A 13-Year-Old Wants to Map All the Bullies in the US. Image via flickr/pressmanwill Imagine you're a parent deciding where to raise your kids. 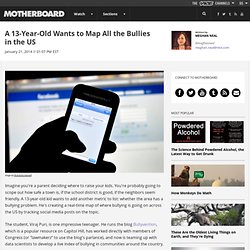 You're probably going to scope out how safe a town is, if the school district is good, if the neighbors seem friendly. The Subway Gangs of Mexico City. By Bernardo Loyola The subway authorities move passengers to different cars so that the Sikarios will bother the least amount of people possible. 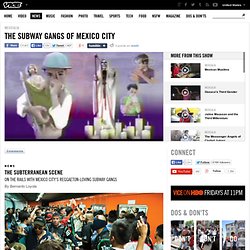 Photos by Mauricio Castillo. It’s Saturday morning in a Mexico City subway station, and the members of the Panamiur gang are headed to a party. Their leader, Cidel, is wearing huge sunglasses, a fauxhawk slathered in hair gel, cargo pants, and a T-shirt with a giant 2 and 6 airbrushed across it—a reference to November 26, 2010, the date the Panamiurs were founded. The Illegal Dirt Bike Gangs of Baltimore. Photo by Lotfy Nathan There is something undeniably American about biker gangs, from the quintessential images ingrained in our mind of the 60s-era Hell's Angels made legendary by the writing of Hunter S. Thompson and The Rolling Stone's film Gimme Shelter to DMX's video for the "Ruff Ryders' Anthem" where he had all those dudes in baggie jeans riding through the ghettos of New York on ATVs and suicycles. It's time to add one more motorist collective to that pantheon of rebels on wheels: Baltimore's Twelve O'Clock Boyz.

They're a hundred-strong gang who wheely dirt bikes through a city where police are banned from chasing them, creating an illegal underground sport that the cops are powerless to do anything about. CDC Issues Alert On Deadly New Designer Drug, Acetyl Fentanyl. Hero Buffalo Bus Driver Darnell Barton Stops Woman From Jumping Off Bridge. On Fox and Friends this morning, Heather Nauert reported an amazing story out of Buffalo, where a hero bus driver prevented a woman from jumping off a bridge. 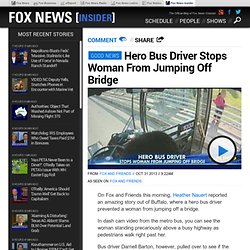 In dash cam video from the metro bus, you can see the woman standing precariously above a busy highway as pedestrians walk right past her. Bus driver Darnell Barton, however, pulled over to see if the woman was OK. She didn't respond, so he left the bus, and wrapped his arms around her. She agreed to come back over the rail at that point. Barton later likened the whole situation to football. "Ya know, when you sit on the bench and the coach calls your number, you gotta go in there and make a play and you gotta do what the play calls for. Cops: white couple attacked by group of black youths near Kings Plaza.

BROOKLYN (PIX11)- A couple was viciously attacked on Monday by a group of black youths in Brooklyn. 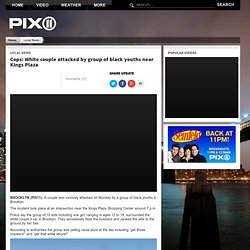 The incident took place at an intersection near the Kings Plaza Shopping Center around 7 p.m. Police say the group of 10 kids including one girl, ranging in ages 12 to 18, surrounded the white couple’s car in Brooklyn. They senselessly beat the husband and yanked the wife to the ground by her hair. According to authorities the group was yelling racial slurs at the two including “get those crackers!” George Zimmerman’s wife: 'I have doubts but I also believe the evidence' News Scott Stump TODAY contributor Sep. 26, 2013 at 9:30 AM ET In the midst of divorce proceedings against husband George Zimmerman, Shellie Zimmerman said she has doubts about what really happened in the shooting death of Florida teen Trayvon Martin last year, she told Matt Lauer in an exclusive interview.

Anderson’s Mother and Brother Beaten then Burned - NorthForkVue. Christina Anderson was hit at least a dozen times in her head, while duct tape covered her mouth and a cable tie bound her ankles. Her son Ethan, who was just eight years of age, was burned so much he was unrecognizable. Those were only a few of the gruesome details that were released by the Medical Examiner’s office in San Diego this week that is investigating the two deaths connected to the kidnapping of Hannah Anderson. Over the last month, the case has drawn the attention of many Americans across the nation. This past August, Christian Anderson, who was 42 and son Ethan were murdered by James Lee DiMaggio, a family friend.

Jesus Was the World's First Tweeter, Vatican Says. ROME — Jesus Christ was the world's first tweeter because his pronouncements were "brief and full of meaning," Vatican cardinal Gianfranco Ravasi said Wednesday. Christ "used tweets before everyone else, with elementary phrases made up of fewer than 45 characters like 'Love one another'," said Ravasi, the Vatican's equivalent of a culture minister. Editor's Note: Should ObamaCare Be Defunded? Vote in Urgent National Poll. Miyuki Ishikawa. Miyuki Ishikawa (石川 ミユキ, Ishikawa Miyuki, born 1897, date of death unknown) was a Japanese midwife and serial killer who is believed to have murdered many infants with the aid of several accomplices throughout the 1940s.

It is estimated that her victims numbered between 85 to 169, however the general estimate is 103. Politicians' potentially career-ending photos. Tickets for bike riders up 7% in Manhattan, 81% in Brooklyn: NYPD. Jefferson Siegel for New York Daily News The Citi Bike bike-share program has been popular among tourists and locals since it launched in May. New York Post. Daily News Building. The lobby of the building includes a black glass domed ceiling, under which is the world's largest indoor globe, which was kept up to date however it has now not been updated for some time.

This was conceived by the Daily News as a permanent educational science exhibit.[4][7] Bill Gallo. Biography[edit] Gallo was born in Manhattan, the son of a journalist father who died when Gallo was 11 years old.[1] Gallo's mother and father were natives of Spain.[2][3] When Gallo graduated from high school in 1941, he landed a copy boy job on the Daily News. Daily News (New York) Taylor Gang Rapper Quay Meanz Arrested for Stabbing NFL Player.

Boston art heist: FBI says it has solved mystery of $500m theft. The FBI says it has solved the decades-old mystery of who stole $500m (£330m) worth of art from Boston's Isabella Stewart Gardner Museum, but it is withholding the identities of the thieves, adding a further twist to the largest property heist in US history. On the 23rd anniversary of the theft, authorities announced a new publicity campaign aimed at generating tips on what they still do not know: where the missing art is.

Their focus has shifted from catching the thieves to bringing home the precious work, including paintings by Rembrandt, Manet, Degas and Vermeer. "The key goal here is to recover those paintings and bring them back," US Attorney Carmen Ortiz said at a news conference at the FBI's Boston headquarters. Just after midnight on 18 March 1990, two men posing as police officers pulled off the heist, stealing 13 pieces of art in 81 minutes. After the attempted sale, the FBI does not know what happened to the art, he added.

Goldman Limits Facebook Investment to Foreign Clients. New Benchmarking Law Has City Buildings Track Energy, Water Use. Former Haitian Dictator Taken Away by Police. Santorum says when his grandfather came to the U.S. in 1925, 'there were no government benefits' Interstate 95 Traffic Cameras.