Interesting Books on the Brain & Mind

The Self Illusion: How Our Social Brain Constructs Who We Are. What Is Character? Debunking the Myth of Fixed Personality. Heaven is for neuroscience: How the brain creates visions of God. For most of recorded history, human beings situated the mind — and by extension the soul — not within the brain but within the heart. 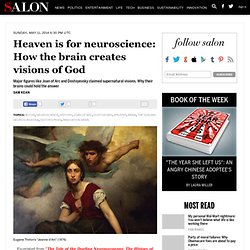 When preparing mummies for the afterlife, for instance, ancient Egyptian priests removed the heart in one piece and preserved it in a ceremonial jar; in contrast, they scraped out the brain through the nostrils with iron hooks, tossed it aside for animals, and filled the empty skull with sawdust or resin. (This wasn’t a snarky commentary on their politicians, either—they considered everyone’s brain useless.) Most Greek thinkers also elevated the heart to the body’s summa. The Man Who Mistook His Wife for a Hat: Amazon.co.uk: Oliver Sacks. The Woman who Changed Her Brain: Unlocking the Extraordinary Potential of the Human Mind: Amazon.co.uk: Barbara Arrowsmith-Young.

Book Description Publication Date: 24 May 2012 Barbara Arrowsmith-Young was born with severe learning disabilities that caused teachers to label her as slow, stubborn or worse. 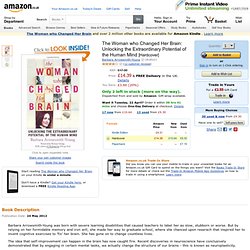 But by relying on her formidable memory and iron will, she made her way to graduate school, where she chanced upon reserach that inspired her to invent cognitive exercises to 'fix' her brain. She has gone on to change countless lives. The idea that self-improvement can happen in the brain has now caught fire. The Woman Who Changed Her Brain powerfully demonstrates how the lives of children and adults struggling with learning disorders can be dramatically transformed. Frequently Bought Together Customers Who Bought This Item Also Bought Product Description Review.

The Archaeology of Mind: Neuroevolutionary Origins of Human Emotion. Incognito: David Eagleman Unravels the Secret Lives of the Brain. By Maria Popova What seeing rainbows has to do with artificial intelligence and the biology of infidelity. 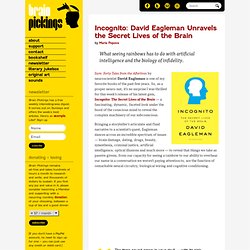 Sum: Forty Tales from the Afterlives by neuroscientist David Eagleman is one of my favorite books of the past few years. So, as a proper neuro-nut, it’s no surprise I was thrilled for this week’s release of his latest gem, Incognito: The Secret Lives of the Brain — a fascinating, dynamic, faceted look under the hood of the conscious mind to reveal the complex machinery of our subconscious. The three-pound organ in your skull — with its pink consistency of Jell-o — is an alien kind of computational material.

It is composed of miniaturized, self-configuring parts, and it vastly outstrips anything we’ve dreamt of building. Sample some of Eagleman’s fascinating areas of study with this excellent talk from TEDxAlamo: And if Incognito tickles your fancy, you might also enjoy V. Brain Pickings has a free weekly newsletter and people say it’s cool. Share on Tumblr. Incognito: The Secret Lives of The Brain: Amazon.co.uk: David Eagleman. Who Am I and If So How Many?: A Journey Through Your Mind: Amazon.co.uk: Richard David Precht. There are many books about philosophy, but Who Am I? 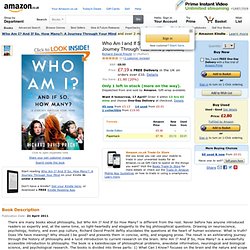 And If So How Many? Is different from the rest. Never before has anyone introduced readers so expertly and, at the same time, so light-heartedly and elegantly to the big philosophical questions. The Neurotourist: Postcards from the Edge of Brain Science: Amazon.co.uk: Lone Frank. Book Description Publication Date: 1 Jun 2011 Acclaimed journalist and intrepid brain 'explorer' Lone Frank embarks on an incredible adventure to the frontiers of neuroscience to reveal how today's top scientists are reinventing human nature, morality, happiness, health, and reality itself. 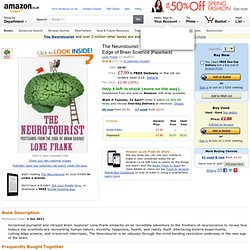 Interlacing bizarre experiments, cutting-edge science, and irreverent interviews, The Neurotourist is an odyssey through the mind-bending revolution underway in the new age of the brain. Frequently Bought Together Customers Who Bought This Item Also Bought Product Description Review. The Self Illusion: Why There is No 'You' Inside Your Head: Amazon.co.uk: Bruce Hood. The Mind, the first volume in The Best of Edge Series, presenting eighteen provocative, landmark pieces. By Maria Popova What mirror neurons have to do with Abu Ghraib, the science of religion, and how happiness flourishes. For the past 15 years, literary-agent-turned-crusader-of-human-progress John Brockman has been a remarkable curator of curiosity, long before either “curator” or “curiosity” was a frivolously tossed around buzzword. His Edge.org has become an epicenter of bleeding-edge insight across science, technology and beyond, hosting conversations with some of our era’s greatest thinkers (and, once a year, asking them some big questions.)

You Are Not So Smart: Why You Have Too Many Friends On Facebook, Why Your Memory Is Mostly Fiction, And 46 Other Ways You're Deluding Yourself By David McRaney.