NASA Admits It Is In Contact With Alien Species And Just Forgot To Mention It. NASA spokeswoman confirms the existence of aliens During the two-hour briefing, Chamberson confirmed that a number of theories which had previously been dismissed as groundless speculation from fringe enthusiasts are actually grounded in reality. 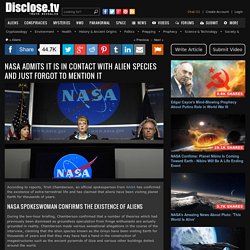 Chamberson made various sensational allegations in the course of the interview, claiming that the alien species known as the Greys have been visiting Earth for thousands of years and that they may have had a hand in the construction of megastructures such as the ancient pyramids of Giza and various other buildings dotted around the world. Alien Contact? There are so many films, documentaries and TV programs on aliens, that we thought everyone was aware of them by now Chamberson went on to confirm various theories about alien mining operations in the solar system.

Sorry. Chamberson also alleged that NASA is in regular contact with no less than four different and entirely separate alien species from various locations in the galaxy. Mummified Alien Discovered in Egypt. Wisdom-Square › Our True History › Mummified Alien Discovered in Egypt A strange story about the Great Pyramid of Giza appeared in the March 2000 issue of the Egyptian magazine Rose El-Yussuf. 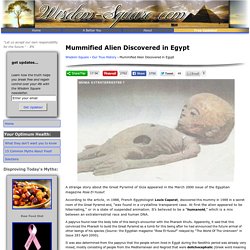 According to the article, in 1988, French Egyptologist Louis Caparat, discovered this mummy in 1988 in a secret room of the Great Pyramid and, "was found in a crystalline transparent case. At first the alien appeared to be hibernating," or in a state of suspended animation. It’s believed to be a “humanoid,” which is a mix between an extraterrestrial race and human DNA. A papyrus found near the body tells of this being’s encounter with the Pharaoh Khufu. Listen Closely To What A U.S. Air Force Colonel Has To Say About UFOs. Below is a video of retired USAF Colonel Charles Halt speaking at a conference held a few years ago at the National Press Club in Washington. 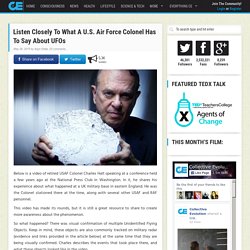 In it, he shares his experience about what happened at a UK military base in eastern England. He was the Colonel stationed there at the time, along with several other USAF and RAF personnel. This video has made its rounds, but it is still a great resource to share to create more awareness about the phenomenon. So what happened? There was visual confirmation of multiple Unidentified Flying Objects. This Is What Happens When A UFO Is Tracked On Military Radar It’s pretty remarkable when you think about it. We are talking about highly skilled, highly trained men who are trusted with jobs usually considered to be of extreme importance – like guarding nuclear missiles, for example. Related CE Article: Why Are UFOs Shutting Down Our Nuclear Missiles For more information, documentation, and statements you can check out this article: Wikileaks Confirmed In 2013, What NASA Was Hiding Till 2015 – Aliens Are REAL AnonHQ. 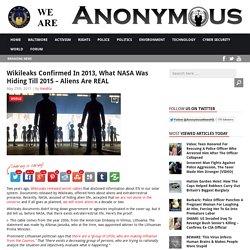 Documents released by Wikileaks, offered hints about aliens and extraterrestrial presence. Recently, NASA, accused of hiding alien life, accepted that we are not alone in the universe and if all goes as planned, we will meet aliens in a decade or two. Wikileaks documents didn’t bring down government or agencies implicated in the cover-up, but it did tell us, before NASA, that there exists extraterrestrial life. Here’s the proof: 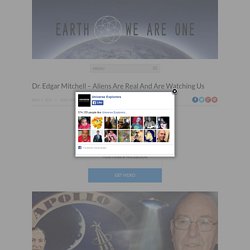 Edgar is a famous NASA astronaut that has walked on the moon. He says he has proof that the Grey aliens are real and that right now aliens are watching us! UFO Aliens Edgar was part of the Apollo 14 space flight January 31, 1971, proceeded by the lunar landing on February 5th. During the two lunar EVAs (Extravehicular Activity), Mitchell along with his Commander Alan Shepard spent about 33 hours on the Moon. Former Canadian Acting PM Paul Hellyer: “USA in grave danger.” Exposes Cabal, calls for New Energy, ET Disclosure, Cabal ouster in 2016 Election - NewsInsideOut. 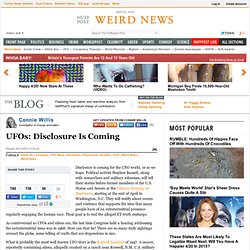 Political activist Stephen Bassett, along with researchers and military witnesses, will tell their stories before former members of the U.S. House and Senate at the Citizens Hearing on Disclosure, starting at the end of April in Washington, D.C. They will testify about events and evidence that supports the idea that many people have of an extraterrestrial presence regularly engaging the human race. Their goal is to end the alleged ET truth embargo. As controversial as UFOs and aliens are, the last time Congress held a hearing addressing the extraterrestrial issue was in 1968.

What is probably the most well known UFO story is the Roswell Incident of 1947. Did you know there was a fleet of UFOs that flew over the White House on July 12, 1952? A massive UFO was spotted by dozens of people over Stephenville, Texas, on Jan. 8, 2008. New Massive UFO Sighting November 30,2012. UFO MASS FLEET Brooklyn, New York 2012. MASS UFO SIGHTING IN MANSFIELD 20/10/2012. Keshe Space exploration.