Should We Be Concerned About an "App Gap"? Last week, the American Academy of Pediatrics restated its long-standing recommendations that parents limits the access to television of children under age two. 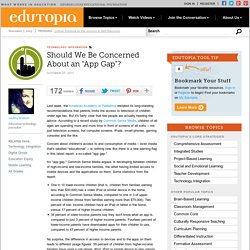 But it's fairly clear that few people are actually heeding the advice. According to a recent study by Common Sense Media, children of all ages are spending more and more time in front of screens of all sorts -- not just television screens, but computer screens, iPads, smart-phones, gaming consoles and the like. Concern about children's access to and consumption of media -- even media that's labelled "educational" -- is nothing new. But there is a new warning flag in this latest report: a so-called "app gap. " An "app gap," Common Sense Media argues, is developing between children of high-income and low-income families, the latter having limited access to mobile devices and the applications on them. Crossing the Digital Divide: Bridges and Barriers to Digital Inclusion. The term digital divide was coined in the mid-1990s as a way to describe the gap in equity between those who have access to computers and the Internet and those who do not. 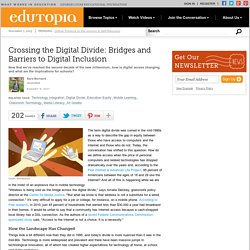 Today, the conversation has shifted to this question: How do we define access when the price of personal computers and related technologies has dropped dramatically over the years and, according to the Pew Internet & American Life Project, 95 percent of Americans between the ages of 18 and 29 use the Internet? And all of this is happening while we are in the midst of an explosive rise in mobile technology. "Wireless is being sold as the bridge across the digital divide," says Amalia Deloney, grassroots policy director at the Center for Media Justice. "But what we know is that wireless is not a substitute for a wired connection.

" It's very difficult to apply for a job or college, for instance, on a mobile phone. Beyond the Teachers' Lounge: The Emerging Connection Gap. We often pontificate about the "haves" and the "have-nots" in our schools -- the unfair way that schools are funded, the ways in which some of our students are robbed of opportunity while others are awash in it. 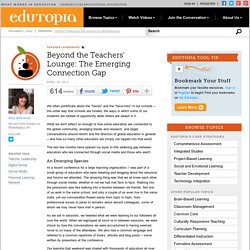 What we don't reflect on enough is how some educators are connected to the global community, emerging trends and research, and larger conversations around reform and the direction of global education in general -- and how so many other educators are simply not tapped into that world. The last few months have opened my eyes to this widening gap between educators who are connected through social media and those who aren't. An Emerging Species At a recent conference for a large teaching organization, I was part of a small group of educators who were tweeting and blogging about the sessions and forums we attended. The amazing thing was that we all knew each other through social media, whether or not we had met face to face.

Celebrating Access to Information. Bridging the New Digital Divide. At the highest performing urban school in the city of Providence, Rhode Island, the mantra when it comes to education is "children always come first. 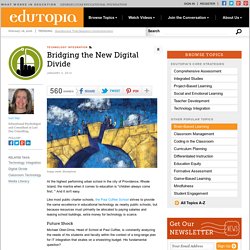 " And it isn't easy. Like most public charter schools, the Paul Cuffee School strives to provide the same excellence in educational technology as nearby public schools, but because resources must primarily be allocated to paying salaries and leasing school buildings, extra money for technology is scarce. Future Shock Michael Obel-Omia, Head of School at Paul Cuffee, is constantly analyzing the needs of his students and faculty within the context of a long-range plan for IT integration that skates on a shoestring budget. His fundamental question? In March of 2010, no one had even heard of an iPad. Technology is a tool, not a solution. Striking a Virtual-Actual Balance The term "digital divide" used to refer to whether classrooms had computers and Internet connections.

Obel-Omia concludes: How Teachers Use Technology: The Latest Research. Back in 2011, I wrote a post about the "New Digital Divide. 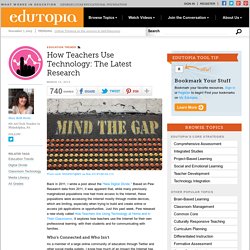 " Based on Pew Research data from 2011, it was apparent that, while many previously marginalized populations now had more access to the Internet, these populations were accessing the Internet mostly through mobile devices, which are limiting, especially when trying to build and create online or access job applications or opportunities.

Just this past week, Pew released a new study called How Teachers Are Using Technology at Home and in Their Classrooms. It explores how teachers use the Internet for their own professional learning, with their students and for communicating with families. Who's Connected and Who Isn't. Is Your School #FutureReady? How long did you spend clearing your email inbox of Cyber Monday messages this week? 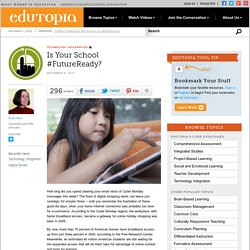 The flood of digital shopping alerts can leave you nostalgic for simpler times -- until you remember the frustration of those good old days, when your home Internet connection was probably too slow for e-commerce. According to the Cyber Monday legend, the workplace, with faster broadband access, became a gateway for online holiday shopping way back in 2005. By now, more than 70 percent of American homes have broadband access, up from just three percent in 2000, according to the Pew Research Center. Meanwhile, an estimated 40 million American students are still waiting for the expanded access that will let them take full advantage of online content and tools for learning. Education Superhighway, a nonprofit advocacy group backed by tech entrepreneurs, estimates that 72 percent of America's schools lack sufficient Internet infrastructure for digital learning.