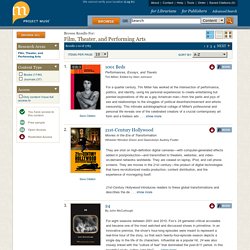 Cones has updated his now classic 43 Ways toFinance Your Feature Film: A Comprehensive Analysis of Film Finance with a substantially reorganized and expanded third edition. An essential reference guide for film professionals on every side of film financing, 43 Ways answers the question that every filmmaker and producer ultimately faces, the issue that can make or break any venture into the film industry: How do I finance my feature film? The third edition includes updated information and coverage of new options for financing.

<i>The Scene of Harlem Cabaret: Race, Sexuality, Performance</i> Le Chat Noir: Historic Montmartre Cabaret. Imagine it is November 18, 1881, and you are standing at 84, boulevard de Rochechouart, just below Montmartre, in the cold of night. 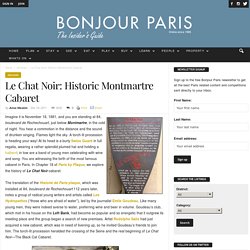 You hear a commotion in the distance and the sound of drunken singing. Flames light the sky. A torch-lit procession is heading your way! At its head is a burly Swiss Guard in full regalia, wearing a rather splendid plumed hat and holding a halberd; in tow are a band of young men celebrating with wine and song. You are witnessing the birth of the most famous cabaret in Paris. The translation of the Histoire de Paris plaque, which was installed at 84, boulevard de Rochechouart 112 years later, notes a group of radical young writers and artists called Les Hydropathes (“those who are afraid of water”), led by the journalist Emile Goudeau. In its early days Le Chat Noir was simply the most exciting place to be for an emerging artist. Rodolphe Salis was an eccentric showman. 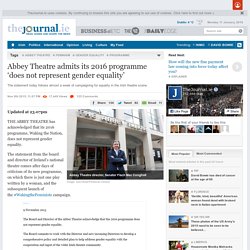 The statement from the board and director of Ireland’s national theatre comes after days of criticism of its new programme, on which there is just one play written by a woman, and the subsequent launch of the #WakingtheFeminists campaign. Lian Bell, a set designer and arts manager, has used the hashtag #WakingTheFeminists over the past week to create a call to action for people who want equality for women in Irish theatre. Pavilion Theatre, Dún Laoghaire - Music, Theatre, Cinema, Dance, Comedy and Family Events - Pavilion Theatre. Druid Theatre and Drama Education - Inspiration for our Podcast. NationalTheatre. Broadway enjoys highest-grossing year ever in 2014. It’s currently playing host to stars including Bradley Cooper, Emma Stone and Jake Gyllenhaal, and now statistics from trade association the Broadway League confirm that the Great White Way is drawing the crowds too. 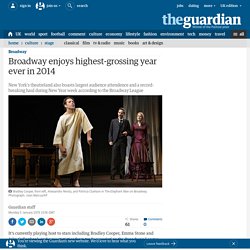 Over the course of 2014, 13.13 million people attended Broadway shows, up 13% on 2013, with box office takings totalling $1.362bn, up 14% on the year before. The Broadway League’s executive director, Charlotte St Martin, said that the increase “demonstrat[es] that our producers are giving audiences a variety of plays and musicals to please many tastes … In addition to long-running favorites, audiences are enthusiastic about the new shows too.”

Variety reports that New Year week was Broadway’s most lucrative week ever, with $42.8m taken at the box office and 37 shows running at 94% of theatres’ total capacity – or, in other words, 346,913 bums on Broadway’s plush velvet seats. Non-Boring Theatre: Three Plays That Will Change Your Mind About Theatre. You don’t like theatre. 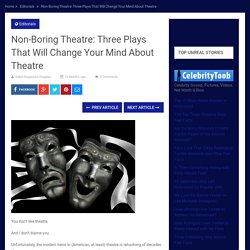 And I don’t blame you. Unfortunately, the modern trend in (American, at least) theatre is rehashing of decades if not centuries-old plays that may have blown audiences’ hair back in the day, but nowadays they fizzle like a soggy sparkler. Theatre is usually thought of as a boring, laborious, and dinosaur artform, and, sadly, it’s hard to argue otherwise. But for as much as I love being a pop-culturist, I have just as big a piece of heart for the stage. I was born and raised in it, and have yet to take my final curtain call. Nowadays entertainment is everywhere and why bother blowing fifty bucks to watch people sit and talk in a room when you can get Angry Birds Star Wars II (obviously, the best in the series) for a buck while listening to your favorite podcast as the latest episode of Rupaul’s Drag Race downloads off of iTunes? 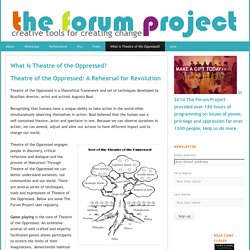 Recognizing that humans have a unique ability to take action in the world while simultaneously observing themselves in action, Boal believed that the human was a self-contained theatre, actor and spectator in one. Weighing In – Bewley’s Cafe Theatre – Review. Header Weighing In by Ger Gallagher – Review by Frank L. 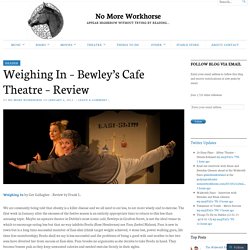 We are constantly being told that obesity is a killer disease and we all need to eat less, to eat more wisely and to exercise. The first week in January after the excesses of the festive season is an entirely appropriate time to return to this less than amusing topic. Maybe an upstairs theatre in Dublin’s most iconic café, Bewleys in Grafton Street, is not the ideal venue in which to encourage eating less but that no way inhibits Breda (Rose Henderson) nor Pam (Isobel Mahon). Pam is new in town but is a long time successful member of Easi-slim (think target weight achieved, 4 stone lost, power walking guru, life time free membership); Breda shall we say is less successful and the problems of being a good wife and mother to her two sons have diverted her from success at Easi-slim. Henderson and Mahon complement each splendidly in a two hander which takes a fair old swipe at the slimming industry. 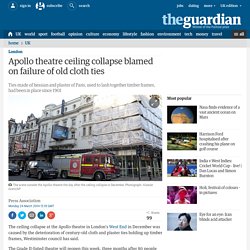 The Grade II-listed theatre will reopen this week, three months after 80 people were injured when about 10 square yards of plaster fell on to the stalls during a performance of The Curious Incident Of The Dog in the Night-Time on 19 December. The ties, made of hessian and plaster of Paris, were used to lash together timber frames to support the suspended ceiling, and had been in place since the theatre opened in 1901. A council spokeswoman said guidance would be issued to other theatres and historic buildings built with similar materials. PALS: The Irish at Gallipoli. Theater Business Costs & Earnings - How Much it Costs to Put on a Show.