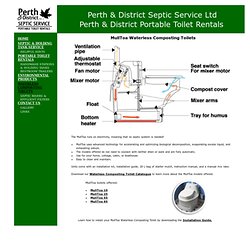 MullToa uses advanced technoligy for accelerating and optimizing biological decomposition, evaporating excess liquid, and exhausting odours.The models offered do not need to coonect with neither drain or ware and are fully automatic.Use for your home, cottage, cabin, or boathouse.Easy to clean and maintain. Units come with an installation kit, installation guide, 20 L bag of starter mulch, instruction manual, and a manual mix rake. 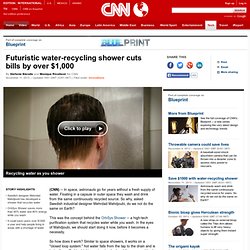 Floating in a capsule in outer space they wash and drink from the same continuously recycled source. So why, asked Swedish industrial designer Mehrdad Mahdjoubi, do we not do the same on Earth? This was the concept behind the OrbSys Shower -- a high-tech purification system that recycles water while you wash. In the eyes of Mahdjoubi, we should start doing it now, before it becomes a necessity. 6 Water-purifying Devices for Clean Drinking Water in the Developing World. With 3.575 million people dying each year from water-related disease, our current water crisis is one of epic proportions. 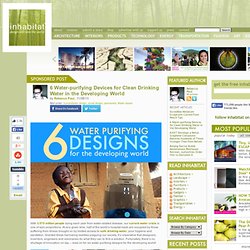 At any given time, half of the world’s hospital beds are occupied by those suffering from illness brought on by limited access to safe drinking water, poor hygiene and sanitation. Granted these harrowing realities plaguing our society, it’s imperative that designers, inventors, engineers and visionaries do what they can to find a solution. 13. Plasma-treated, Carbon-nanotube Filters For Water Purification In Developing Countries. Health Published on August 26th, 2013 | by James Ayre. 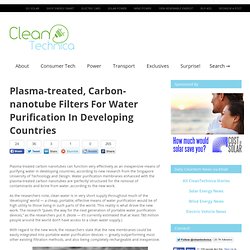 The Lifestraw: A portable water filter that could save millions of third world lives. LifeStraw is portable water filter developed in DenmarkEnabling millions of people in Third World do drink unclean water safelyRemoves 99.99% of water-borne bacteriaNow being sold on Firebox for £29.99 By Martha De Lacey Published: 09:14 GMT, 13 August 2013 | Updated: 14:35 GMT, 13 August 2013 It's the bane of every hiker's life: what to do when you run out of water. 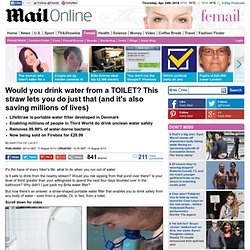 Is it safe to drink from the nearby stream? 5 Gallon Bucket Water Filtration System. MadiDrop: Water Filter for Developing World-Borgen. In developing nations, people living in rural or poor communities rely on local groundwater that is often contaminated, and water filters are often too expensive to install. 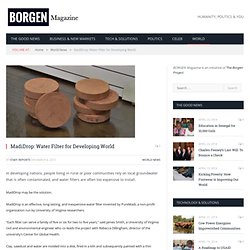 MadiDrop may be the solution. MadiDrop is an effective, long-lasting, and inexpensive water filter invented by PureMadi, a non-profit organization run by University of Virginia researchers. “Each filter can serve a family of five or six for two to five years,” said James Smith, a University of Virginia civil and environmental engineer who co-leads the project with Rebecca Dillingham, director of the university’s Center for Global Health. Students invent inexpensive water purification system that costs $5. (ConsumerWellness.org) A new, inexpensive water purification technology developed by engineering students at Gonzaga University of Spokane, Wash., shows promise in offering clean water to African nations that currently go without. 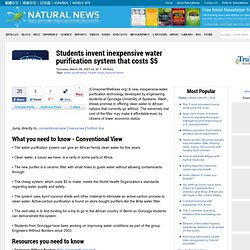 The extremely lost cost of the filter may make it affordable even by citizens of lower economic status. Jump directly to: conventional view | resources | bottom line. Australian scientist create free water filter to solve world's drinking water problems. An innovative new technology, developed by Australian National University (ANU) materials scientist Mr Tony Flynn, allows water filters to be made from commonly available materials and fired on the ground using using only manure, without the need for a kiln, furnace or Western technology. 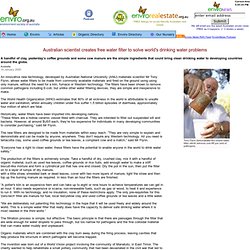 The filters have been shown to remove common pathogens including E-coli, but unlike other water filtering devices, they are simple and inexpensive to make. Clay Pot Water Filter. How to Make a Coffee-Clay Water Filter - Howtopedia. From Howtopedia - english Water-borne, diarrhoea-causing bacteria, such as E. coli, kill 1.6 million people every year. 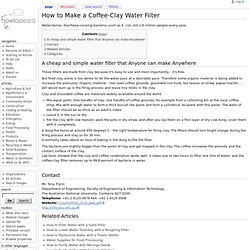 A cheap and simple water filter that Anyone can make Anywhere Those filters are made from clay because it's easy to use and most importantly... it's free. But fired clay alone is too dense to let the water pass at a desirable pace. Therefore some organic material is being added to increase the porousity: Organic material - like used coffee grounds, grounded rice husk, tea leaves or straw, papier-maché... - will would burn up in the firing process and leave tiny holes in the clay.

Clay and Grounded coffee are materials widely available around the world. Mix equal parts: One handful of clay, one handful of coffee grounds, for exemple from a collecting bin at the local coffee shop. A dung fire burns at around 950 degrees C - the right temperature for firing clay. The bacteria are slightly bigger than the pores of clay and get trapped in the clay. Contact Mr. Related Articles. Bill Gates Names Winners of the Reinvent the Toilet Challenge.

“Next-generation” toilets showcased at Gates Foundation offer innovative sanitation solutions that can save and improve lives around the world SEATTLE – Bill Gates today announced the winners of the Reinvent the Toilet Challenge—an effort to develop “next-generation” toilets that will deliver safe and sustainable sanitation to the 2.5 billion people worldwide who don’t have it. 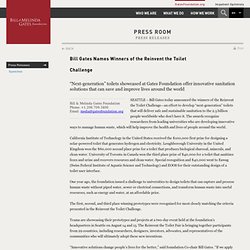 The awards recognize researchers from leading universities who are developing innovative ways to manage human waste, which will help improve the health and lives of people around the world. California Institute of Technology in the United States received the $100,000 first prize for designing a solar-powered toilet that generates hydrogen and electricity. Loughborough University in the United Kingdom won the $60,000 second place prize for a toilet that produces biological charcoal, minerals, and clean water. “Innovative solutions change people’s lives for the better,” said foundation Co-chair Bill Gates.

The History and Design of the Bathroom Part 8: Pulling It All Together. Images and drawings by Lloyd Alter Over the last few weeks I have tried to pull all of the disparate ideas for the bathroom together and come up with a functional and practical set of ideas. Here is a summary of them all, in one bathroom that you can't have; the components don't exist. But they could easily. 1) Separate the functions. Crapping On Bill Gates' "Reinvent the Toilet" Winner. Caltech/Video screen capture I was out of town last week when the Gates Foundation announced the winner of its Reinventing the Toilet Competition; Brian covered it here. When I first wrote about it I was rather negative about the idea, writing Gates Foundation Throwing $42 Million Into The Toilet.

I have rarely received so many nasty comments, calling me every name in the book for criticizing the Gates Foundation, they are geniuses and I am just a...blogger!