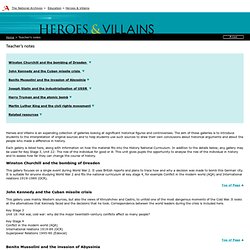 The aim of these galleries is to introduce students to the interpretation of original sources and to help students use such sources to draw their own conclusions about historical arguments and about the people who made a difference in history. Each gallery is listed here, along with information on how the material fits into the History National Curriculum. In addition to the details below, any gallery may be used for Key Stage 3, Unit 22: The role of the individual for good or ill. This unit gives pupils the opportunity to analyse the role of the individual in history and to assess how far they can change the course of history. Winston Churchill and the bombing of Dresden This gallery focuses on a single event during World War 2. Yt Treaty of Versailles - all u need 2 know. Yt DEM BONES 1. Yt DEM BONES 2. Yt Tom Waits Buddy can you spare a dime. Yt SPY WHO SHAGGED ME. GCSE/IB History: The Peace Treaties After WW1. 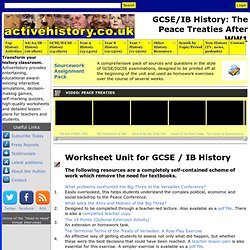 ActiveHistory provides entertaining, educational award-winning interactive simulations, decision-making games, self-marking quizzes, high-quality worksheets and detailed lesson plans for teachers and students. Useful Links Home of the "Head to Head"Virtual Interviews Testimonials from subscribers 'Excellent website which brings lessons to life, and enhances teaching and learning'. Alan Riley, Head of Humanities, Towneley High School, Burnley. 'ActiveHistory inspires students, it brings together their understanding to engage with the subject at a deeper level, aids revision and is a godsend for planning for overstretched teachers! 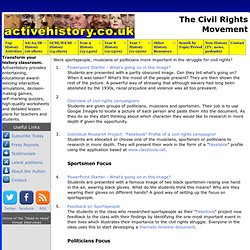 Postwar 1945 - present. Many postwar records held at The National Archives are still so secret they are not open to the public. 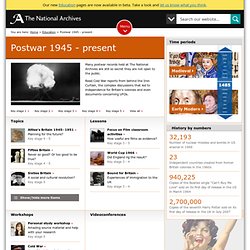 Read Cold War reports from behind the Iron Curtain, the complex discussions that led to independence for Britain's colonies and even documents concerning UFOs. Topics Attlee's Britain 1945- 1951 Planning for the future? Key stage 4 - 5 Fifties Britain Never so good? Yt ANIMATED SOVIET PROPAGANDA Anti imperialism. Fifties Britain. For many people, the 1950s were a golden age. 'Let's be frank about it,' declared Harold Macmillan in July 1957: 'most of our people have never had it so good.' Almost immediately the Prime Minister's words became a symbol of the age, capturing the optimism of a nation basking in the sunshine of the affluent society. 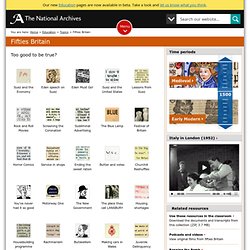 Yet like so many political quotations, they are often misunderstood. Macmillan meant them not as an expression of complacency, but as a warning. 'What is worrying us,' he went on, 'is "Is it too good to be true? " It is no wonder that we rarely remember what Macmillan really meant by his famous phrase. As the economy began to boom, wages soared and unemployment almost disappeared, everyday life became more comfortable. It was this extraordinary economic growth that paved the way for everything that followed. Yet as the reaction to rock and roll suggests, there was a thick vein of anxiety beneath the surface of the affluent society.