Martial Artistry. Intense thunderstorms likely to only become worse. By Paul Brown for The Daily Climate LONDON – More intense thunderstorms combined with damaging winds are expected to occur because of climate change, according to speakers at the seventh European Conference on Severe Storms being held in Helsinki, Finland. 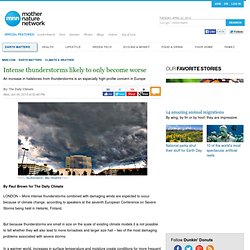 But because thunderstorms are small in size on the scale of existing climate models it is not possible to tell whether they will also lead to more tornadoes and larger size hail – two of the most damaging problems associated with severe storms. In a warmer world, increases in surface temperature and moisture create conditions for more frequent – and intense – thunderstorms, researchers say. Climate change also decreases the temperature difference between the poles and the equator. It is this temperature difference – when cold and warm air masses collide – that causes dangerous wind sheer, in turn producing the devastating tornadoes such as occurred recently in Oklahoma. Limits of global models. Scientists discover what’s killing the bees and it’s worse than you thought - Quartz. Universal Basic Income (UBI) proposals are gaining in popularity across the political spectrum. 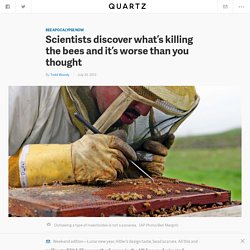 The measures would see governments hand a set monthly income to every single citizen within a country, either in addition to existing benefits or in place of them (depending on the details of the particular UBI proposal). Left-wing fans favor UBI’s ability to eradicate absolute poverty, while right-wing libertarians are drawn to its simplicity and reduction in bureaucracy. In Silicon Valley, startup investment firm Y Combinator has plans to fund a basic income experiment in the US, while Finland announced last year it would conduct its own extensive experiment.

How to avoid getting trapped in FEMA camps. By James Smith I wrote a news story recently called “How technology will send you to hell in the FEMA camps” It was wildly popular and raised the question in my mind, “How do I prevent my family from going to the camps?” 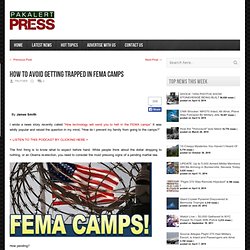 The first thing is to know what to expect before hand. While people think about the dollar dropping to nothing, or an Obama re-election, you need to consider the most pressing signs of a pending martial law. How pending? About 15 minutes or less away from being put into a bus. Illinois illegally seizes Bees Resistant to Monsanto’s Roundup; Kills remaining Queens.

The Illinois Ag Dept. illegally seized privately owned bees from renowned naturalist, Terrence Ingram, without providing him with a search warrant and before the court hearing on the matter, reports Prairie Advocate News. 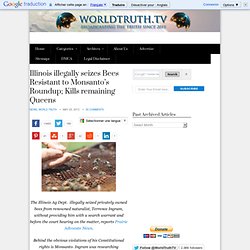 Behind the obvious violations of his Constitutional rights is Monsanto. Ingram was researching Roundup’s effects on bees, which he’s raised for 58 years. “They ruined 15 years of my research,” he told Prairie Advocate, by stealing most of his stock. A certified letter from the Ag Dept.’s Apiary Inspection Supervisor, Steven D. Chard, stated: Militarized police gone wild across America; terrorizing citizens, shooting pet dogs, behaving like occupying military force. (NaturalNews) The article which originally appeared here has been removed because it is no longer aligned with the science-based investigative mission of Natural News. 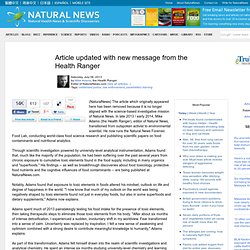 In late 2013 / early 2014, Mike Adams (the Health Ranger), editor of Natural News, transitioned from outspoken activist to environmental scientist. He now runs the Natural News Forensic Food Lab, conducting world-class food science research and publishing scientific papers on food contaminants and nutritional analytics. Through scientific investigation powered by university-level analytical instrumentation, Adams found that, much like the majority of the population, he had been suffering over the past several years from chronic exposure to cumulative toxic elements found in the food supply, including in many organics and "superfoods. " Notably, Adams found that exposure to toxic elements in foods altered his mindset, outlook on life and degree of happiness in the world. 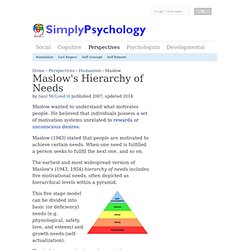 He believed that individuals possess a set of motivation systems unrelated to rewards or unconscious desires. Maslow (1943) stated that people are motivated to achieve certain needs. When one need is fulfilled a person seeks to fullfil the next one, and so on. The earliest and most widespread version of Maslow's (1943, 1954) hierarchy of needs includes five motivational needs, often depicted as hierarchical levels within a pyramid.

This five stage model can be divided into basic (or deficiency) needs (e.g. physiological, safety, love, and esteem) and growth needs (self-actualization). The deficiency, or basic needs are said to motivate people when they are unmet. One must satisfy lower level basic needs before progressing on to meet higher level growth needs. Every person is capable and has the desire to move up the hierarchy toward a level of self-actualization. The original hierarchy of needs five-stage model includes: 1. The-end-of-the-world-as-we-know-it-1999537. Possible causes of the end of the world. 14 Signs That the Collapse of Our Modern World has Already Begun. Policier, Thriller, Enquête.