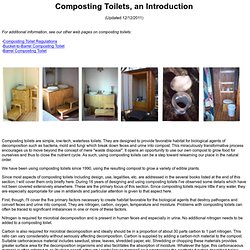 They are designed to provide favorable habitat for biological agents of decomposition such as bacteria, mold and fungi which break down feces and urine into compost. This miraculously transformative process encourages us to move beyond the concept of mere "waste disposal". It opens an opportunity to use our own compost to grow food for ourselves and thus to close the nutrient cycle. What Are Composting Toilets? - Green Homes. What are composting toilets? 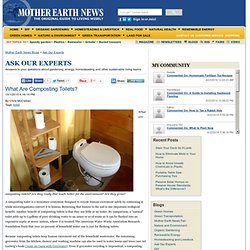 Are they really that much better for the environment? Are they gross? How Composting Toilets Work. Green Building Library Waste Reduction and Recycling Composting toilet systems (sometimes called biological toilets, dry toilets and waterless toilets) contain and control the composting of excrement, toilet paper, carbon additive, and, optionally, food wastes. 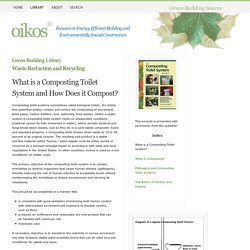 Unlike a septic system a composting toilet system relies on unsaturated conditions (material cannot be fully immersed in water), where aerobic bacteria and fungi break down wastes, just as they do in a yard waste composter. Sized and operated properly, a composting toilet breaks down waste to 10 to 30 percent of its original volume. The resulting end-product is a stable soil-like material called "humus," which legally must be either buried or removed by a licensed seepage hauler in accordance with state and local regulations in the United States. In other countries, humus is used as a soil conditioner on edible crops. Composting Toilets: All You Ever Wanted To Know. Many people have a lot of misconceptions when they hear the words “composting toilets”. 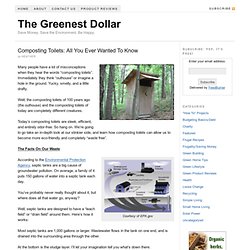 Any community garden will need a toilet facility and ours was designed and built by one of our members (with some help) to provide a basic and easy to maintain loo. 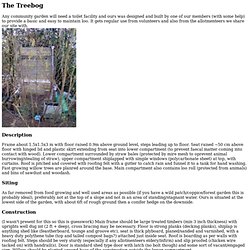 It gets regular use from volunteers and also from the allotmenteers we share our site with. Description Frame about 1.5x1.5x3 m with floor raised 0.9m above ground level, steps leading up to floor. Seat raised ~50 cm above floor with hinged lid and plastic skirt extending from seat into lower compartment (to prevent faecal matter coming into contact with wood). The Humanure Handbook - Center of the Humanure Universe. Factsheet: Compost Toilets (PDF) Back Country Sanitation Manual (Composting Toilets And Greywater) Books For Maintainers Appalachian Trail Design, Construction, and Maintenance: The primary stewardship manual for volunteers who are involved in designing, constructing, or maintaining portions of the Appalachian Trail. 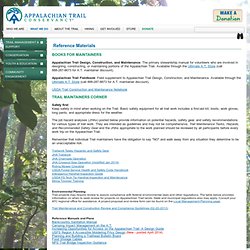 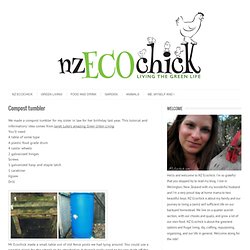 This tutorial and information/ idea comes from Janet Luke’s amazing Green Urban Living. You’ll need:A table of some type A plastic food grade drum4 castor wheels2 galvanized hingesScrews1 galvanized hasp and staple latch1 carabiner JigsawDrill Mr Ecochick made a small table out of old fence posts we had lying around. You could use a wooden plank for the wheels to be attached to it doesn’t really need to be very high off the ground.

I bought a plastic drum off trade me. For the door of the compost bin draw a square on the drum.Drill several holes at the corners of the square.Use a jigsaw and cut the door out. Screw the hinges to the door and attach to the drum.Screw the latch on the other end of the door to keep the door closed. Drill large holes all the way around both ends of the drum for air holes. Build an Outhouse (Privy) with plans from 1909 - The Prepper Journal. Editors Note: We have discussed the importance of sanitation here on the Prepper Journal before and Linda has written this excellent article with advice from an old book that shows how you can make your bathroom time much more pleasant than squatting over a hole in the rain. 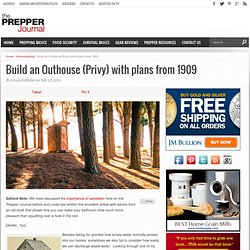 [divider_1px] Outhouse from the rear Besides taking for granted how simply water normally arrives into our homes, sometimes we also fail to consider how easily we can discharge waste-water. Looking through one of my favorite old books the other night, I was reminded of how easy most of us have it today. The 1909 book, “Household Discoveries and Mrs. “It is believed that any 14-year-old schoolboy of average intelligence and mechanical ingenuity can, by following these plans, build a sanitary privy for his home” at an expense of $5 to $10 per receptacle, according to locality, the book states. Privy Bucket Rotation. Composting Toilets - Appropedia. Creating A Low Budget Composting Toilet.

What makes this sanitary and earthy smelling instead of just a bucket of crap is the cover material. 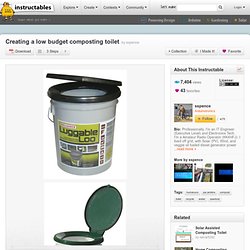 Cover material can be grass clippings, Peat Moss, Coconut Coir (recycled coconut fibers), ground up corn cob, or even sawdust (raw wood preferred, not kiln dried). Our favorite is the Recycled Coconut Coir (a waste product from the food industry) and the ground corn cob. Put about 3" in the bottom of the bucket before use to act as a liquid absorbent and after every deposit, cover with another inch or so. Some folks use a plastic bag liner, especially when camping. This makes it easier to keep the bucket clean, but harder to compost, as the bag needs to be disposed of. Composting Toilets - Autonopedia. Composting Toilets - Free Info & Plans. How to Build a Composting Toilet Barrel System. DIY Solar Assisted Composting Toilet. The following is an excerpt from my book Simple Solar Homesteading (www.simplesolarhomesteading.com) Composting toilets have been used for many years and commercial composting toilets are available and used by many off grid homes. 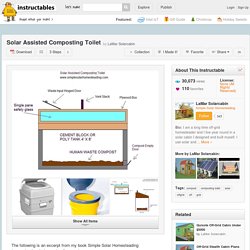 Human waste can be safely composted into valuable fertilizer that can be used around fruit trees and shrubs but not recommended for gardens. Constructing Our Solar Composting Toilet. This is one of those important projects that took a long time to reach the top of the project list. It is too inconvenient to be working in the barnyard or fields and run up to the house whenever the situation arises.

Additionally, we were just not set up to accommodate visitors. Our goal is to eventually open the farm to the public and now we have a toilet facility. We had this project listed on the Victory Seed Web site in 2004 as a future need. Solar Composting Toilet System - Mother Earth News. Related Content Poo in the News How to safely dispose of or make use of human waste is becoming a hot topic.

It's pretty hard to deny that the common flush toilet is the easiest, most "euphemistic" apparatus yet invented for disposing of human waste. Trouble is, it's also the most wasteful: Just flip that chrome lever and—whoosh! —five gallons of potable water take the plunge, to carry away a few ounces of solid or (even more wasteful) liquid effluvium. So what's the best alternative available to the growing number of environmentally minded folk who are hunting for a convenient, economical way to dispose of human waste without creating a water-squandering situation?

No-Flush Options. Composting Toilet World. Compost Toilet At City Farmer. Published by City Farmer, Canada's Office of Urban Agriculture Compost Toilet Update March 23, 2004 For the past six years our toilet, made by Sun-Mar, has been used by staff members and some visitors. Use of the toilet has been "light" because it is not our home toilet, and because there are two alternative flush toilets inside the building where we work.

Sun-Mar Composting Toilets. Zero environmental impact. Use no water. Works with nature to produce fertilizer and evaporate liquids. Soft unbleached toilet paper can go in the toilet however female sanitary supplies cannot. Reed Bed System & Composting Toilets. One of the characteristics that separates 21st century homo sapiens from the other species with which we share the planet is that we relentlessly take from the natural world but seldom give back. The flawed economic system by which we imagine we sustain our lives places a commercial value on the planet’s resources but not an ecological one. It is almost a cliché now to say that when we throw our waste away, there actually is no away but only someone else’s door step or some other life form’s habitat. But raised awareness does not seem to have reduced our disposable habits.

Our dilemma is that we must consume natural resources to live, yet these resources are finite and many are rapidly depleting. We have belatedly begun to re-cycle but far from enough. In Paris and London and other European cities, it was once common to gather night soil - what Joseph Jenkins calls ‘humanure’ - to be returned to the land. Portable Cardboard Toilet. Urine Composting: Compost your Pee. Urine For Garden, Composting Urine Video.