Easiest Homemade Wine Ever! How To Brew - By John Palmer. Introduction There are many good books on homebrewing currently available, so why did I write one you ask? 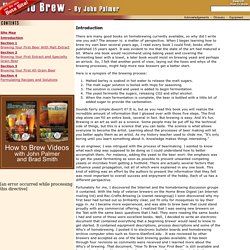 The answer is: a matter of perspective. When I began learning how to brew my own beer several years ago, I read every book I could find; books often published 15 years apart. 9 Serious DIY Beer-Brewing Rigs. This is a three-tier brewing system, a simple—but elegant—gravity-fed rig. 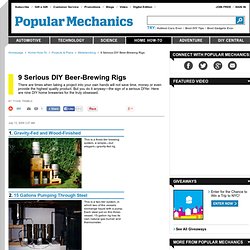 This is a two-tier system, in which two of the vessels exchange liquid with a pump. Each steel pot on this three-vessel, 15-gallon rig has its own natural gas burner and thermometer. The Brewing Network.com: Radio For Home Brewers. Building A Keg Still (Bokakob Design, Reflux Still) Building a Keg based reflux still using the bokakob design, with some modifications courtesy of the distilling community. 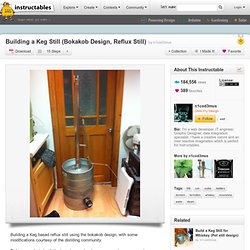 Before you start check the laws in your local area, some places you cant even own a still let alone use it to make a drinkable product, check it out first. Pressing & Brewing Cider - Apple Cider Homebrew. Whizbang Cider: Whizbang Cider Photo Gallery. My 46-page planbook, Anyone Can Build A Whizbang Apple Grinder And Cider Press tells you exactly how to build the grinder and press shown in the pictures below. 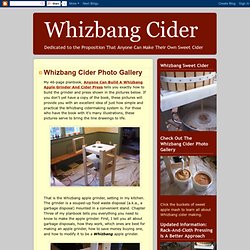 If you don't yet have a copy of the book, these pictures will provide you with an excellent idea of just how simple and practical the Whizbang cidermaking system is. For those who have the book with it's many illustrations, these pictures serve to bring the line drawings to life. That is the Whizbang apple grinder, setting in my kitchen. How to Build a Cider Press - DIY. Related Content Cider Press Plans Want fresh cider? 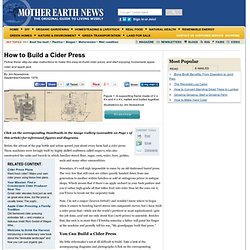 Make your own cider press using these free plans. Click on the corresponding thumbnails in the Image Gallery (accessible on Page 1 of this article) for referenced figures and diagrams. Before the advent of the pop bottle and urban sprawl, just about every farm had a cider press. Nowadays, it's well nigh impossible to come by an old-fashioned barrel press. Making Brandy From Store Bought Wine. Moonshine 4 Dummies - StillDrinkin.com. DIY Moonshine In A Pressure Cooker. How to make moonshine at home using a pressure cooker still with our moonshine instructions, and we'll give you a peach moonshine recipe and a video for whiskey moonshine. 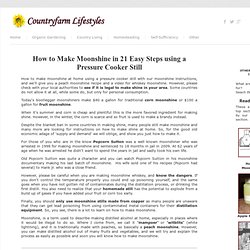 However, please check with your local authorities to see if it is legal to make shine in your area. Some countries do not allow it at all, while some do, but only for personal consumption. Our Apple Pie Moonshine. By PieGuy (California) Me and a buddy of mine were drinking quite heavily one night when we had a breakthrough ( as most people do about 15 beers deep) what if we were to start making our own booze. 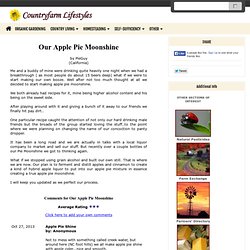 Well after not too much thought at all we decided to start making apple pie moonshine. We both already had recipes for it, mine being higher alcohol content and his being on the sweet side. After playing around with it and giving a bunch of it away to our friends we finally hit pay dirt.. One particular recipe caught the attention of not only our hard drinking male friends but the broads of the group started loving the stuff..to the point where we were planning on changing the name of our concoction to panty dropper. It has been a long road and we are actually in talks with a local liquor company to market and sell our stuff. What if we stopped using grain alcohol and built our own still.

Moonshine & Homemade Stills. By Jesse Taylor (Ohio, USA) Making a Still, which is short for "Distillery", is quite easy. 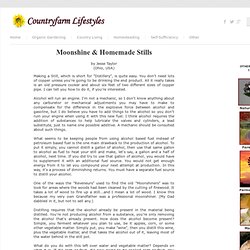 You don't need lots of copper unless you're going to be drinking the end product. All it really takes is an old pressure cooker and about six feet of two different sizes of copper pipe. I can tell you how to do it, if you're interested. Alcohol will run an engine. What seems to be keeping people from using alcohol based fuel instead of petroleum based fuel is the one main drawback to the production of alcohol. One of the ways the "Reveneurs" used to find the old "Moonshiners" was to look for areas where the woods had been cleaned by the cutting of firewood.

Distilling requires that the alcohol already be present in the material being distilled. A Complete Guide to Moonshine, Still Plans, Home Distilling and Moonshining. The result was the doublings, or good whiskey. 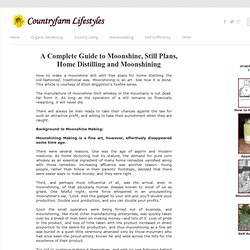 It was also called "doubled and twisted" whiskey, the first because it was double strength, and the second, because it twisted slightly as it came out of the worm. Using this rig, a man could get about two gallons of whiskey per bushel of corn, or a final yield of about twelve gallons after proofing. By way of contrast, there are operations running today which yield as much as three hundred gallons per run—a far cry from the old days.

The two previous stills show what happened as moonshiners got more and more impatient with the slowness of the first operation described. Perhaps the most revolutionary addition was the thump barrel. The still in Plate 278 illustrates effectively what happens as man's desire for quantity overtakes his desire for quality. Beer Making. Homebrewing.