Granny square. Hair Oils to Make Your Hair Healthy and Grow. How coconut oil and baking soda takes 5 years off your age. I Won’t Hide My Vitiligo With Makeup. Natural hair. Plus.google. Plus.google. Headband Refashion - Skip To My Lou Skip To My Lou. Our headband had a flower that was starting to look a little tired and worn so we made it new again! 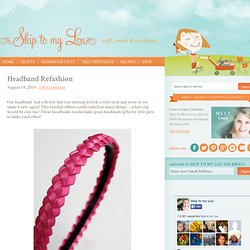 This braided ribbon could embellish many things— a hair clip would be cute too! These headbands would make great handmade gifts for little girls to make each other! Wild Olive: project: felt and fabric hexagon accessories. I never get tired of making my own simple accessories, mainly because I can whip up something to go with anything, without spending a lot of time or money to do so. 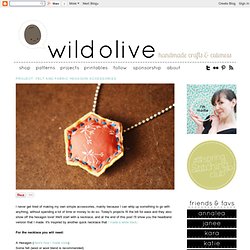 Today's projects fit the bill for ease and they also show off the hexagon love! We'll start with a necklace, and at the end of this post I'll show you the headband version that I made. It's inspired by another quick necklace that I made a while back. For the necklace you will need: A Hexagon (Here's how I made mine) Some felt (wool or wool blend is recommended) Embroidery floss Stuffing (optional) A plain necklace Place your hexagon onto the felt and cut around the shape, leaving a small amount of felt showing.

Make a ring. Ooooh….. let's make some fabric flower rings with no glue or thread. 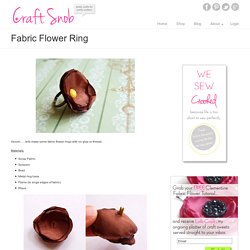 Liberia: Three Million Liberians Down With Diabetes. By Alloycious David The Liberia Diabetes Center has released a scaring statistics that threatens the country's population. 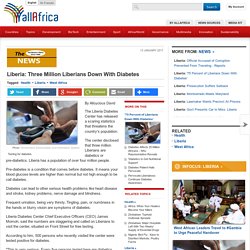 The center disclosed that three million Liberians are diabetics or pre-diabetics. TLC Africa. “When peace like a river, attendeth my way. 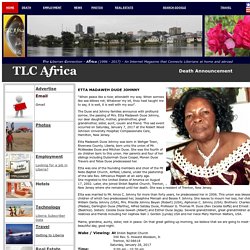 When sorrows like sea billows roll; Whatever my lot, thou hast taught me to say, it is well, it is well with my soul”. The Duoe and Johnny families announce with profound sorrow, the passing of Mrs. Etta Madaweh Duoe Johnny, our dear daughter, mother, grandmother, great grandmother, sister, aunt, cousin and friend. This sad event occurred on Saturday, January 7, 2017 at the Robert Wood Johnson University Hospital/ Compassionate Care, Hamilton, New Jersey. Etta Madaweh Duoe Johnny was born in Wehgar Town, Rivercess County, Liberia, born unto the union of Mr. TLC Africa. Marjuwen Arthurine Cooper Sweet and Adorable but gone too soon. 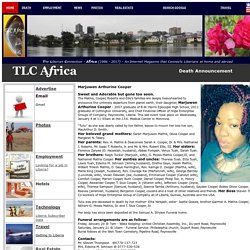 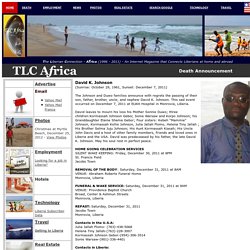 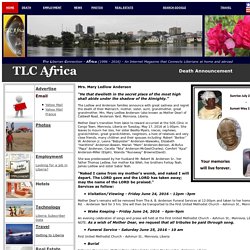 Mary Ledlow Anderson “He that dwelleth in the secret place of the most high shall abide under the shadow of the Almighty.” The Ledlow and Anderson families announce with great sadness and regret the death of their Matriarch, mother, sister, aunt, grandmother, great grandmother, Mrs. AT&T has today announced that they will open pre-orders for the Samsung Galaxy… Untitled. How To Make Natural Viagra Using Only 2 Ingredients. Did you know that you can make Viagra at your very own home by using its main ingredients? 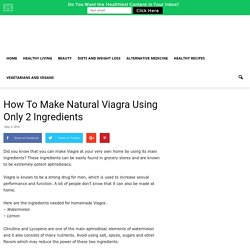 These ingredients can be easily found in grocery stores and are known to be extremely potent aphrodisiacs. Viagra is known to be a strong drug for men, which is used to increase sexual performance and function. Basics. 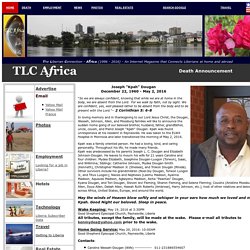 For we walk by faith, not by sight. TLC Africa. Mr. T. Konnah Anderson It is with great sadness that the Anderson, Chachi, Ricks, Kpaan, Dorley and Askie families announce the passing of their; Brother, Son, Cousin, Uncle and father, T. Konnah Anderson. TLC Africa. Deacon David D. Tolbert, Sr. . , TLC Africa. January 8, 1925 – April 9, 2016 The Gibson, Glover, and Strasser-Nicol families regret to announce the home going, in her 91st year, of Mrs.