Riots and Research: What a 1968 Report on Urban Unrest Has to Do With Ferguson. This piece is published in collaboration with Echoing Ida, a Forward Together project.Read more of our coverage related to recent events in Ferguson here. 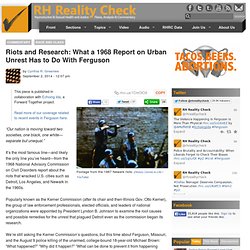 “Our nation is moving toward two societies, one black, one white—separate but unequal.” It’s the most famous line—and likely the only line you’ve heard—from the 1968 National Advisory Commission on Civil Disorders report about the riots that wracked U.S. cities such as Detroit, Los Angeles, and Newark in the 1960s. Popularly known as the Kerner Commission (after its chair and then-Illinois Gov. Otto Kerner), the group of law enforcement professionals, elected officials, and leaders of national organizations were appointed by President Lyndon B.

Johnson to examine the root causes and possible remedies for the unrest that plagued Detroit even as the commission began its research. More than 40 years later, the report is an essential but troubling read. The report didn’t mince words about how police actions inflamed tense situations. This is not the Ferguson I thought I grew up in. There was a pear tree to the rear of our house when I grew up in Ferguson, Missouri, more than 50 years ago. 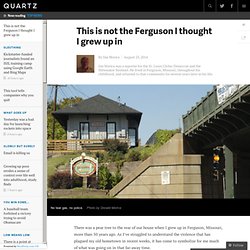 As I’ve struggled to understand the violence that has plagued my old hometown in recent weeks, it has come to symbolize for me much of what was going on in that far-away time. The grass didn’t grow very well beneath its canopy, and during the summer my brothers and I used to drag toy tanks and rubber soldiers through the grey dust around its base. We fought fierce, imaginary battles there in which issues of right and wrong were never in doubt, and where we could control the outcome as we pleased. Missouri AG: Ferguson Grand Jury Was Misled On Deadly Force Statute. Post Racial America. Segregation’s Long Shadow. Segregation’s Long Shadow Memorial at the site where Michael Brown was shot, Ferguson, MO, August 25 (Youth Radio/Flickr) As the ongoing protests in Ferguson, Missouri subside from national attention, the conditions that fostered them have only come into clearer view. 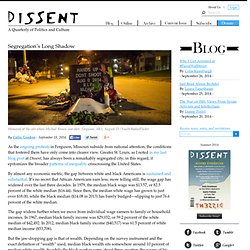 Greater St. Louis, as I noted in my last blog post at Dissent, has always been a remarkably segregated city; in this regard, it epitomizes the broader patterns of inequality crisscrossing the United States. By almost any economic metric, the gap between white and black Americans is sustained and substantial. The gap widens further when we move from individual wage earners to family or household incomes. But the jaw-dropping gap is that of wealth. Teaching the #FergusonSyllabus. When the unrest in Ferguson unfolded in August, I was among the millions transfixed by the images broadcast live from the heartland. 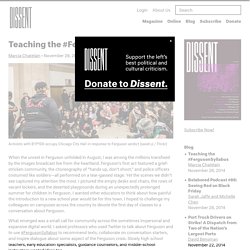 Ferguson’s first act featured a grief-stricken community, the choreography of “hands up, don’t shoot,” and police officers costumed like soldiers—all performed on a tear-gassed stage. Yet the scenes we didn’t see captured my attention the most. I pictured the empty desks and chairs, the rows of vacant lockers, and the deserted playgrounds during an unexpectedly prolonged summer for children in Ferguson. I wanted other educators to think about how painful the introduction to a new school year would be for this town. I hoped to challenge my colleagues on campuses across the country to devote the first day of classes to a conversation about Ferguson.

What emerged was a small call for community across the sometimes impersonal and expansive digital world. When the news that a St. Recommendations from #FergusonSyllabus Danielle L. Mari Evans, “If There Be Sorrow” New Web Package for Teaching Ferguson. Talking Heads: A Look Back at the Violence in Ferguson. Ferguson: community voices. On August 9, 2014 a white police officer shot unarmed black teenager Michael Brown dead in the St. 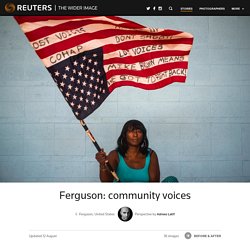 Louis suburb of Ferguson, Missouri. I documented events in August and again in November last year when street protests escalated after the officer was cleared of wrongdoing. For some Ferguson residents, the events have made them get more involved in the community. “My life won’t ever be the same,” said a 36-year-old activist and protester who goes by the nickname Chocolate. “When I ask kids what they want to be when they grow, they respond ‘I want to be alive’. Story Brown’s shooting stoked a debate over race relations, policing and the criminal justice system in a year when the United States has become acutely aware of the deaths of civilians, especially black people, at the hands of police. Events in Ferguson sparked a national movement, causing a reaction from coast to coast.

We felt Ferguson deserved to be revisited ahead of the one-year anniversary. Others were keen to talk. Two Thoughts on Ferguson. Uncategorized I’ve been doing a fair amount of reading, and mostly trying to just listen. 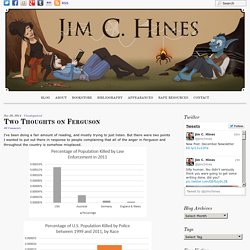 But there were two points I wanted to put out there in response to people complaining that all of the anger in Ferguson and throughout the country is somehow misplaced. Statistics on “justifiable police homicides” in the U.S. (chart 1) are far from perfect. But when police are three times more likely to kill a black person than a white person, then we have a serious, widespread, and ongoing problem.

Of course, if you grew up black in this country, you probably knew that already… Graph 1 Data: Graph 2 Data: Black Lives Matter.

Related:  History of the United States of America - in Depth -   -  Education   -  Enterprise