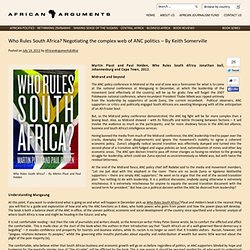 - By Martin Plaut and Paul Holden Martin Plaut and Paul Holden, Who Rules South Africa Jonathan ball, Johannesburg and Cape Town, 2012. Midrand and beyond The ANC policy conference in Midrand at the end of June was a forerunner for what is to come at the national conference at Mangaung in December, at which the leadership of the movement (and effectively of the country) will be up for grabs. South Africa: Marikana is a turning point. 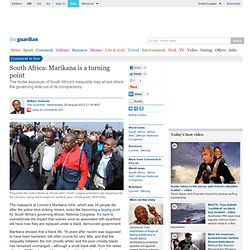 It's hard to overestimate the impact that scenes once so associated with apartheid will have now they are replayed under a black, democratic government. Marikana showed that a black life, 18 years after racism was supposed to have been banished, still often counts for very little, and that the inequality between the rich (mostly white) and the poor (mostly black) has remained unchanged – although a small black elite, from the ranks of senior ANC leaders, public servants and trade unions, has become fabulously rich. Nowhere is inequality more obvious than in the mining sector, the focal point of black slave-labour conditions. Witness - Witness - Congo my Foot. Racism in South Africa Part 1. Township Cinderellas - Witness. Filmmaker: Paul and Sam Sapin Filmed in 2011, Township Cinderellas follows two high school students - born in 1994, the year South Africa became a democracy - as they prepare to graduate. 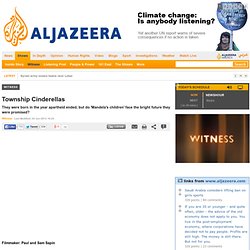 Shafieqah Saban and Zaahiedah Stellenboom are high school students in Manenberg in western South Africa's Cape Flats. Their hometown was created out of the forced removal of 'coloured' families from Cape Town. Unemployment in the Cape Flats runs at 60 per cent and the area is notorious for its high poverty, murder and assault rates. Shafieqah and Zaahiedah are 'Mandela's children' - the year group born in 1994, when South Africa became a democracy.

For both girls, making it this far is a huge achievement. Witness follows Shafieqah and Zaahiedah through these final days as they sit their exams and prepare for the dance that marks their transition into adulthood. Desmond Tutu's dreams for Cape Town fade as informal apartheid grips the city. For his 80th birthday, a spiritual homecoming. 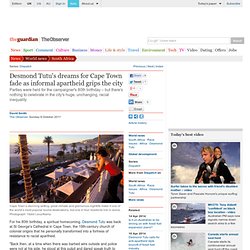 Desmond Tutu was back at St George's Cathedral in Cape Town, the 19th-century church of colonial origins that he personally transformed into a fortress of resistance to racial apartheid. "Back then, at a time when there was barbed wire outside and police were not at his side, he stood at this pulpit and dared speak truth to power, truth to evil," mused Bono, the Irish singer, in one of two birthday events held for the archbishop emeritus at the cathedral last week. Bono went on to describe Tutu and Nelson Mandela as "one of the great one-two punches in the universe".

Others praised the archbishop as the de facto leader of the struggle when Mandela and comrades were in exile or jailed on Robben Island. But as Tutu defied his years to dance with the Soweto Gospel Choir, half an hour's drive away, another churchman had just completed a month-long hunger strike. It is not, say residents, the Cape Town that Tutu dreamed of and fought for. South Africa: legacy of the World Cup. A hundred years since birth, but what has happened to the ANC? – By Richard Dowden. It produced one of the greatest leaders of the 20th century. 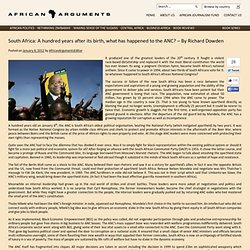 It fought a violent race-based dictatorship and replaced it with the most liberal constitution the world has ever known. Its song, a poignant Christian hymn, became South Africa’s national anthem. Since it came to power in 1994, about two thirds of South Africans vote for it. So whatever happened to South Africa’s African National Congress? The success or failure of the new South Africa has been a race between the expectations and aspirations of a young and growing population and the ability of the government to deliver jobs and services. A hundred years old on January 8th, the ANC is South Africa’s oldest political organisation, beating the National Party (which instigated apartheid) by two years. Quite soon the ANC had to face the dilemma that has divided it ever since. The fall of the Berlin Wall came as a shock to the ANC. Meanwhile an internal leadership had grown up in the real world of strikes and street battles.