Angola’s heir apparent: It could be a long wait. Angola: Is UNITA sinking after Chivukuvuku jumps ship? – By Keith Somerville. Abel Chivukuvuku leaves UNITA in readiness for dos Santos' departure in 2017 It is now nine years since Jonas Savimbi was killed by Angolan government troops, but the UNITA movement he founded and led is still struggling to find its feet and to develop a clear identity and political role. 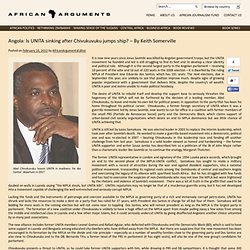 Although it is the second largest party in the Angolan parliament – receiving 10 percent of the vote and 16 out of 220 seats in the 2008 election – it is dwarfed by the ruling MPLA of President Jose Eduardo dos Santos, which has 191 seats. The next elections, due in September this year, are unlikely to see that position improve much, despite signs of growing popular impatience with a government that delivers little, despite the country’s oil wealth. UNITA is poor and seems unable to make political headway. UNITA is still led by Isaias Samakuva. Chivukuvuku presents a threat to UNITA, as he could take former UNITA supporters with him, while drawing in PRS and DB sympathizers. 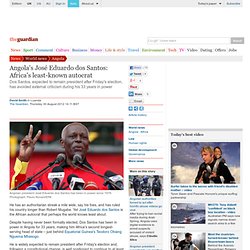 Photograph: Paulo Novais/EPA He has an authoritarian streak a mile wide, say his foes, and has ruled his country longer than Robert Mugabe. Yet José Eduardo dos Santos is the African autocrat that perhaps the world knows least about. Despite having never been formally elected, Dos Santos has been in power in Angola for 33 years, making him Africa's second longest-serving head of state – just behind Equatorial Guinea's Teodoro Obiang Nguema Mbasogo. He is widely expected to remain president after Friday's election and, following a constitutional change, is well positioned to continue to at least 2022. "The world screams when a president changes the consitution for a third term," said Rafael Marques de Morais, an anti-graft activist and journalist.

De Morais continued: "He is a dictator who is not as flamboyant as the ordinary African dictators and this has misguided many people in Africa. "But he is autocratic.

Of Mines and Men. A from-the-ground report on how the tapping of Angola’s natural resources has kept the country a killing field, and made it one of the world’s most glaringly inefficient kleptocracies. 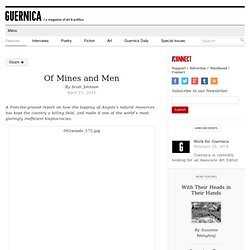 Photograph by Paolo Woods Jim is an American oilman from Oklahoma, and he’s sitting in a darkened corner of a whorehouse in downtown Luanda. He’s fat, white, gaping lazily at the black African prostitutes in fuchsia-colored miniskirts and heels who patrol the floor. He orders a beer, sits back on the leathery couch to watch the dimmed lights flicker off the shiny bar tops, the dark wood of the balustrades, the crystalline shimmer emanating from the disco ball that dangles like a low-hanging fruit. Waitresses in short, tight tops, jeans, and fuzzy rabbit slippers pad around sleepily taking orders and comments. More men have begun to drift in now, and along with them more languages. African oil is changing, Jim explains. Oilmen like Jim are a little bit nervous about this. Mr. Charlie agrees with this.